At the top of the world: My unforgettable arctic expedition | Inquirer Lifestyle ❮ ❯ 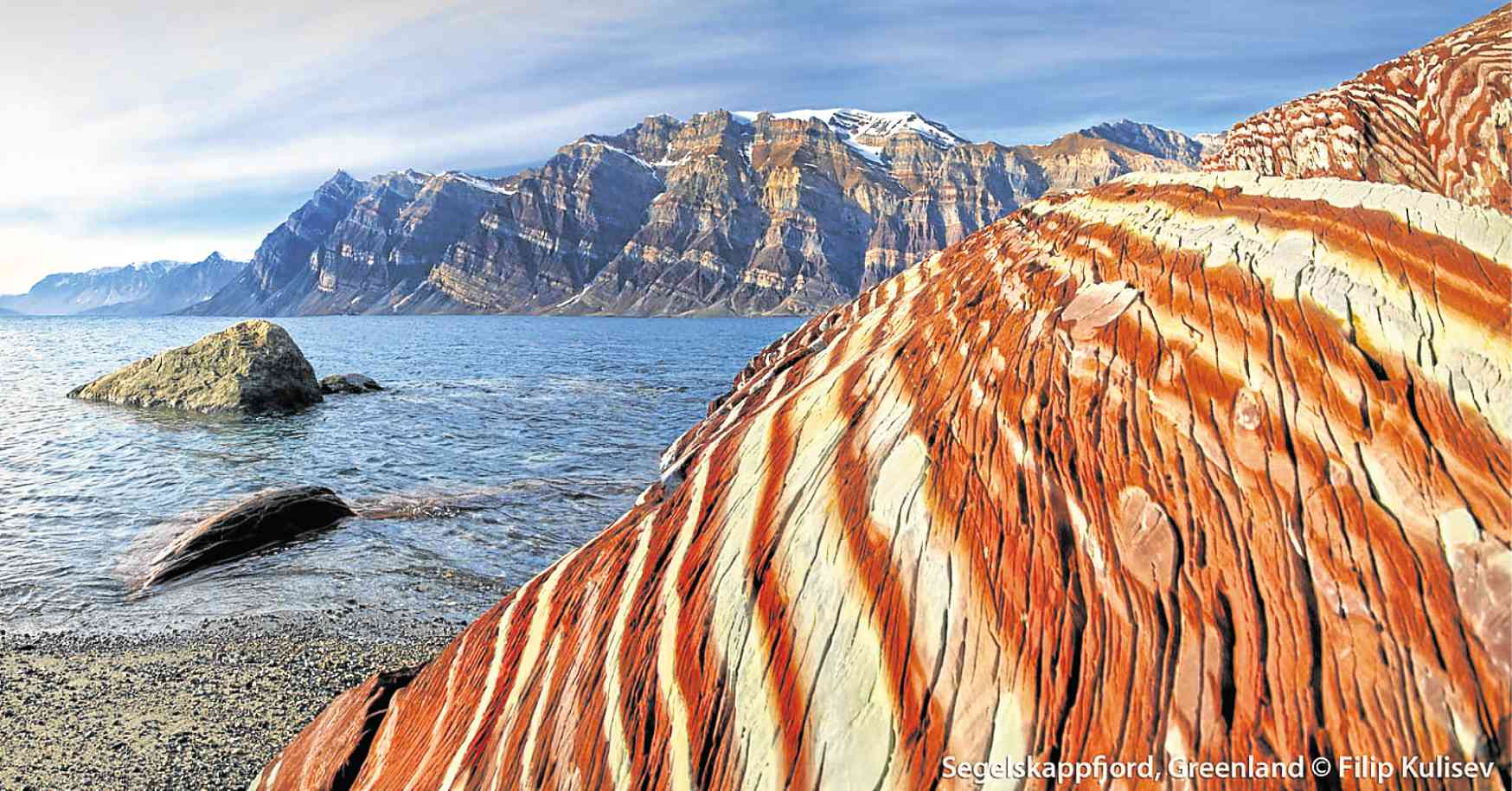 The rising of mountains, movements of the continental shelf, and glaciers melting reveal the geological history of these land forms in Segelskappfjord, Greenland. —Photos by Filip Kulisev

At the top of the world: My unforgettable arctic expedition

Having seen a good part of the world, I decided that it was time to dig once more into my bucket list and bring some of my more drastic dreams to fruition.

This year I literally went over the top—the top of the world, that is.

The Arctic was my destination, this mysterious place close to the North Pole covered with sheets of ice that might melt away with climate change, which lured me with such magnetism that I could not resist reaching this northern wilderness.

My friends and I chose Poseidon Expeditions to take us there, an outfit known for its experienced navigators, polar experts and tasteful accommodations on the all-suite M/V Sea Spirit for 114 passengers, guaranteed to please the most discriminating travelers.

When we all converged from all parts of the world in Oslo, we made quite a stylish and ebullient group of tourists, well aware that soon our chic wardrobe would have to be  compromised with regulation waterproof boots and red down parkas.

A commercial plane flew us to the High Arctic in Longyearbyen in Svalbard, Norway’s northernmost island.

Our group was the last voyage for the end of the polar summer, and our 14-day cruise that began Sept. 1 would be marked by longer nights with pleasant temperatures between 2°C and 5°C.

After this, the winter would turn the sky to darkness, and bring the harsh coldness down to -35°C.

Traveling to the Polar Regions  is a cruise that makes fjords and wildlife reachable. The captain and crew are experts in navigating the Arctic region. However, even on this ice-worthy ship, our Swedish captain depended heavily on weather and ice conditions.

Anja Erdman, our German-born expedition leader, was very knowledgeable in natural and cultural history, with a team of professional polar experts. The hotel and engineering was were a motley crew of nationalities, led by Filipinos.

We learned upon boarding that we were the first Pinoys ever to join the vessel, and the staff celebrated this with extra attention, ensuring that we had hot pan de sal for breakfast, and meals of adobo, sinigang, bangus and fried rice.

Svalbard was a revelation. Other than the paltry tidbit that it was where the famous ballerina Maya Plisetskaya first performed onstage in an amateur play staged by her mother, my knowledge of the city now includes the fact that one cannot be born or die there. It has no hospitals, no doctors and no cemetery—the latter, specifically because when the snow melts, the tundra is waterlogged!

Its settlers in the 17th century were hunters from other countries, involved in the whaling and fur trade depleting its wildlife. Tourists have brought  the population of polar bears down to 3,000.

Polar bears live best when it’s colder, when the sea ice becomes their hunting ground for seals. In summer when the land is covered by vegetation, they become vegetarians.

Very significant is the presence of a Global Seed Vault. Established in 2007, the vault safekeeps 3 million seed samples  under a thick layer of permafrost, creating a safety net against an accidental loss of diversity.

We set sail from Svalbard toward the north. In the morning we docked at Ny-Alesund, the Norwegian research station for climate change, situated 79 degrees from the North Pole and the closest our imagination got to the top of planet Earth.

In the afternoon we set out for our first trek in Sigmahamna, spotting our first animal, the Arctic fox.

We sailed closer to our first glacier, the 7 km-long Lillihook, where we chanced upon a bearded seal on an iceberg, easy prey for a polar bear who never showed up.

In the evening we crossed the Greenland Sea to enter the North-East Greenland National Park.

The world’s largest island is the size of France and Spain combined. It has a 110-year-old ice sheet, 81 percent of its area. Situated in the North American Plate, it is, however, officially in Europe, as it functions as a self-governed territory of the Kingdom of Denmark.

Eighty-six percent of the 55,000 Inuits that populate Greenland live in the towns, leaving the island largely uninhabited.

Greenland is not a part of the European Union nor of Schengen, so a Filipino passport holder needs to apply for a Schengen visa with a notation, “Valid for Travel to Greenland.”

White but called Green, located in America but officially Danish, not qualified for two of Europe’s largest alliances—that makes three misnomers for this underpopulated destination with much to be proud of.

I, for one, consider coming to East Greenland as the highlight of my Arctic trip, for three reasons: whale-watching, the polar bear and the magnificent northern lights. We sailed for 14 days, so hopes were high for sightings.

East Greenland National Park is the largest in the world, and has a very fragile ecosystem. It is the last argument against global warming because when the ice melts, it means a  rising sea.

Entry of boats into the park is restricted to once a year, at the end of the short summer season.

We trekked for two hours every day, entering a new fjord daily. The ground is soft, covered by permafrost in the past years.

The northern lights presented their first spectacle on the fifth day on the boat. Green lights danced on the horizon, eliciting ooohs and aaahs from a totally captivated crowd.

We chased the lights every night, and as if to bedazzle us further, there were even brighter illuminations of green and red on our last two nights.

The finale was the result of the sun’s emission of plasma in a solar storm. Oxygen release creates the red and green bursts, while nitrogen will display the blue and purple shades. The full effect of the phenomenon is best appreciated on a very dark night, when the sky is clear. Galileo is credited with this explanation in 1619, and gave the phenomenon its name, inspired by the Roman goddess of dawn.

We learned much about geology, flora, fauna and the elusive polar bear, which still needed to materialize. Our vigilance was rewarded on our 11th day, in Vikingebugt, Scoresby Sund, before we crossed over to Iceland. The announcement was sudden, loud and clear: “Polar bear at two o’clock!”

There was a frenzied rush to set up cameras and tripods while the expedition team very efficiently brought down the 10 zodiacs (dinghies) in 10 minutes.

We boarded in the sequence assigned to us at the start of the trip: group A, B, C and D and got up as close as we safely could to a 400-kg female bear perched on the mountainside, feeding on plants. We were beyond excited by this rare sight, a ferocious mammal waiting for the snow to cover the earth so she could hunt for her meal.

Ittoqqortoormiit was the only settlement and the remotest along the east coast of Greenland. Its population consists of 450 Inuits and two Danes, the schoolmaster and the postman.

We checked out the supermarket, modern and complete, from food to motorbikes. We were told not to shop, however, in order not to deplete the stocks, which were replenished only once a year.

The school would put our own public schools to shame, with a Western curriculum augmented by courses like carpentry, fishing, swimming, geology, climate change studies and everything the community needs to learn in a fast-changing environment.

It took a day and a half to cross over to the west coast of Iceland, and our reentry into civilization, aka the internet. Our first landing was in Stikkisholmur on the north of Snaefellsnes, a place so green, it should trade names with the island we came from.

The next day we docked in another fishing town, Isarfjorour, the largest town in the Westfjords peninsula, with a population of 2,600.

Our port of disembarkation was Reykjavik, the capital, where we spent five more days appreciating a country so safe it was rare to find roving police.

We were more than content to have been to a remote country where all other glaciers, lakes and mountains pale in comparison, where we felt the scenery was exclusively ours.

Someday when I look back on this recent trip, I am sure Louis Armstrong’s evocative rendition of “What a Wonderful World” will engulf my musings, and I will be totally enamored of the magical Arctic all over again.

But it is my obsession for the aurora borealis that will make me laugh.

The northern lights were the compelling reason for me to visit the Arctic. I promised myself that when we got to Greenland, I would be ready to run to watch them at a moment’s notice.

Alas, it was a comedy of errors. When the expedition head announced that the night was brightly lit with the famous lights, I hurriedly slipped my parka over my pajamas and my feet into my warm booties, and dashed out of our suite. That split second after closing the door behind me was when I realized that I didn’t have my keys. I frantically knocked but couldn’t be heard. And I was hesitant to use the house phone to rouse my roommates, because I didn’t have my reading glasses and feared dialing a wrong number.

When the light show ended, I was alone except for a few photographers catching the Auroras, while everyone was fast asleep. So I stayed in the library until the first crew member reported for work and issued me a duplicate key.

Just as well that I spent the time in the library, for it was absolutely one long and memorable night for the books! —CONTRIBUTED