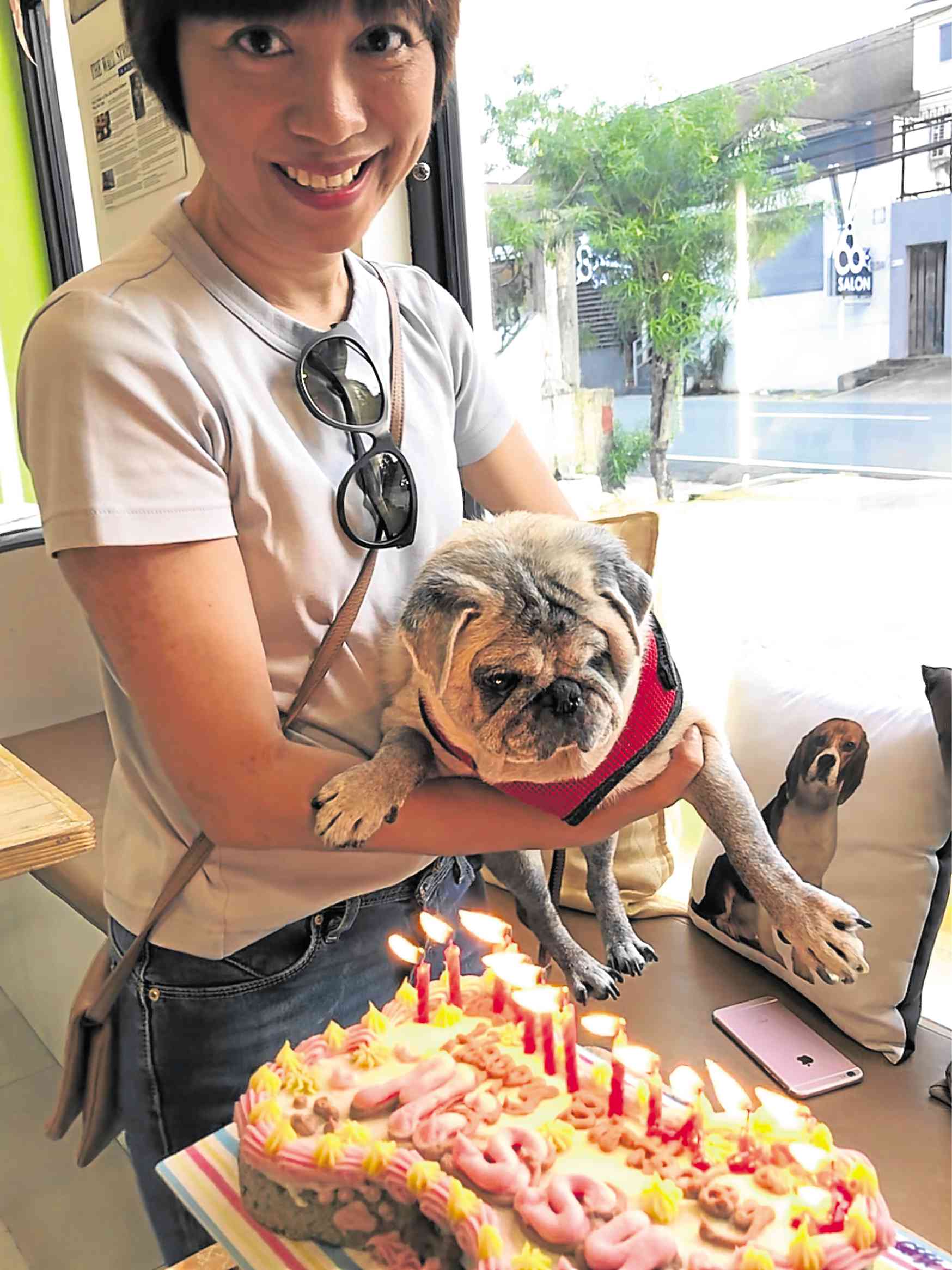 On her 14th birthday in August

When the fourteen years which Nature permits

Are closing in asthma, or tumour, or fits,

And the vet’s unspoken prescription runs

To lethal chambers or loaded guns,

Then you will find—it’s your own affair,

But… you’ve given your heart to a dog to tear.

When the body that lived at your single will,

With its whimper of welcome, is stilled (how still!).

When the spirit that answered your every mood

Is gone—wherever it goes— for good,

You will discover how much you care

And will give your heart to a dog to tear.—From “The Power of the Dog,” by Rudyard Kipling

Grief is a quicksand—the more you flail and struggle, the quicker it swallows you into its depths.

It has been a month since my beloved pug, Missy, died. She was 14. I had her for a third of my life.

It has been staggering, the enormity of the void left by a creature so tiny. I was unmoored. It hit me in ways even my cancer diagnosis last year didn’t.

No day has passed, since she succumbed quite suddenly to pneumonia on Nov. 8, that I haven’t wept. Some days are worse than others.

It wasn’t love at first sight when I met Missy’s wrinkly face 14 years ago. She was only four months old and no bigger than a city rodent.

The little thing squirmed throughout the drive home to Makati from Katipunan, where the breeder turned her over, that December evening in 2004. She stank so bad I held her literally at arm’s length throughout the ride. Her sharp, still untrimmed nails left scratches and welts on my arms.

I was reluctant to have another pet. I had experienced the loss of a dog; I still remembered the exquisite pain of learning my pup was run over by a car while I was in school. I cried for days.

But Missy—named after the badass American rapper Missy Elliott—was a generous and well-meaning birthday gift that I couldn’t refuse.

When the vet said I should return her to the breeder because they didn’t disclose her severe eye infection, which meant she was sure to go blind on her left eye, I refused.

I’ve had her for only two days then, but I was besotted.

However, I was unprepared. I had not had a dog since I was 14 I had forgotten what it was like.

On her first night home, I fed her several servings of kibbles, quickly refilling each time she polished the contents of her bowl. Wow, I thought, she’s so hungry the breeder must not have fed her!

She had the runs that night.

I would soon discover her appetite was so enormous she was never sated, however much I fed her. I didn’t know then that pugs were notorious for their love of food. For her, everything was a treat, so it was easy to give her meds.

And I was putty in her little paws.

I’d tell people that if I had a child, she’d be fat and spoiled. Missy was both—strangers often asked if she was pregnant.

I called her my sous chef, who was always next to the stove or hot oven, grunting and snorting, whenever I was making something—and I was always making something. She had to be put on a weight-loss diet when she developed arthritis and hip dysplasia.

She enjoyed dressing up. She would automatically raise her paws whenever I’d slip a tee over her head.

As she grew older, and climate change became more real, the clothes were ditched entirely. We switched to scarves and necklaces. For four years until she died, she wore a USB necklace with her info and photos saved on it—her low-rent version of a microchip, we liked to joke.

I now tie her scarves around the neck of her urn. At night, I carry her urn and lay it next to my pillow where she used to sleep.

Am I crazy? I asked a grief coach friend. She assured me it was all right, if it was helping me cope. It is—she’s there when I wake up.

(In the week after she died, I’d also listen to her recorded snores on loop.)

Missy was so used to socializing with humans I often wondered if she thought she was human—or that we were dogs and she was our alpha. She was ambivalent toward other dogs.

She sulked in the beginning when Spike, who’s six months younger, was adopted shortly before she turned three years old. But she learned to be tolerant of him, even allowing him to snuggle at times. He followed her around, deferring to her lead at all times.

We took her on vacations—to Boracay, Palawan— before brachycephalic breeds were banned by airlines. She so loved the water, just not her bath water; she would suddenly vanish whenever she sensed me prepping her bath implements.

It was routine to take her out on weekends, long before pets  were welcomed at restaurants.

Invariably, her favorite was Italianni’s in Bonifacio High Street, where she once had her birthday party—she’d pull you toward the resto even if we had already eaten somewhere else. (We took her urn there on the day of her cremation.)

Always well-behaved, she received pats and praises from the wait staff and strangers wherever we went.

But the runt had so much mischief in her little body. Once she nearly died after finding a pack of tablea chocolate and went to town with it. I got her to the vet just in time.

Once she had difficulty pooping, a long white thing was coming out her, I thought it was her intestines! She ransacked the bathroom and ate a good part of a roll of tissue.

Humans will disappoint you, but dogs won’t, even when they’re being “bad.”

When Missy died, Spike whimpered for days, searching for her all over the house. He was asleep when we took her to the vet; she never came home again.

We brought him to her funeral and cremation at Pet Valley Park and Crematory in Silang, Cavite. He barked nonstop when I moved his face close to her body so that he could sniff her—I read that it was important, so the surviving dog knows where their buddy went.

Now 13 and also afflicted with arthritis and has difficulty standing, he stood up and wanted to get closer to the altar where they laid out his best bud so beautifully.

It’s difficult to come home to a house where there’s no one there to welcome you with joyful excitement. While sweet, gentle Spike will sleep through comings and goings, you always got a ticker tape parade from Missy, whether you’ve been away five minutes or five days.

The grief from the loss of a pet is something not many will fully understand. They’re not “just a pet” that you can replace once they’re gone. The heartache from losing them is directly proportional to the immeasurable love and joy they give you in their short life.

Slowly, I’m coming to accept that her time to rest has come. She gave me 14 years full of hugs and licks and kisses.

My greedy, orphaned heart is learning to hush its disconsolate wailing, to be gratified by the memories—and heavens, are there enough to last me a lifetime!

Thank you, Missy, baby bug. You live on in Mommy’s heart.