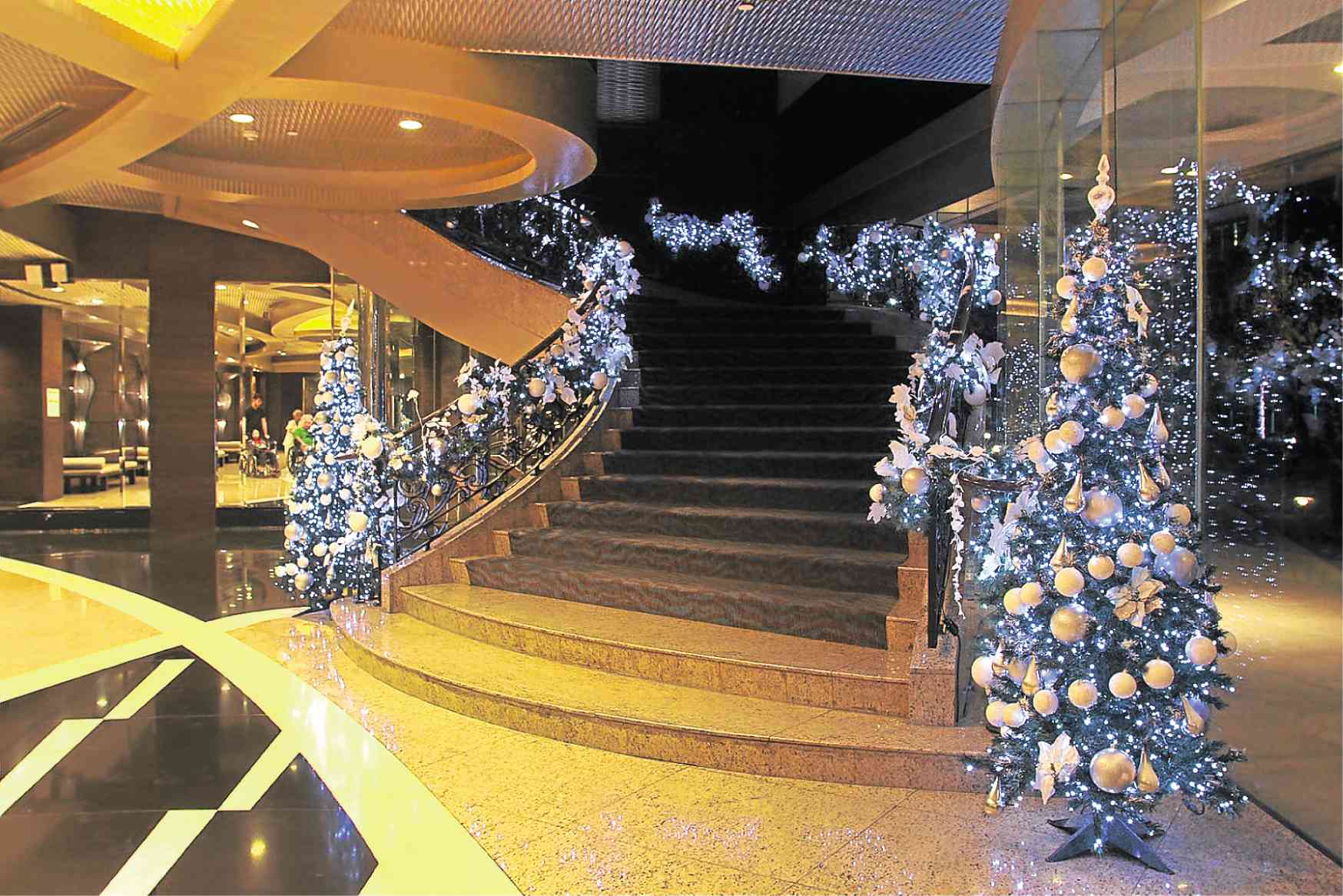 Winter Wonderland at the stairwell leading to the ballroom.

Christmas is gold and clear crystals and glass

The Christmas décor at Bellevue Manila looks restrained by day, but at night, the Christmas trees, wreaths and garlands sparkle with thousands of LED lights.

“You will feel the Christmas spirit with the lights on,” decorator Tony Rodriguez says.

This year, the scheme revolves around gold and clear materials such as glass, crystals and acrylic. There are less frills.

The main tree at the lobby is topped with a metal cone instead of the traditional star. The branches beam with lights, with gold and crystal balls reflecting the glow. The bottom of the tree is lined with faux grass topiaries and huge crystal and glass balls.

Urns are filled with tamarind twigs, wound up with sparkling lights, gold and glass balls, golden silk poinsettias and peonies.

In the main-wing stair banisters, Rodriguez has replaced the common scallop garland with embellished tamarind twigs. The small tables in the public spaces are adorned with dainty vases of silk poinsettias and golden balls.

Rodriguez says each wing of the hotel carries a color theme. “It’s as if you’re in three different places in one hotel,” he explains.

The Grand Ballroom wing has the white color scheme. “The air conditioning is the coldest here. It feels like winter,” Rodriguez says.

Rodriguez has lined the windows of the facade with giant wreaths of silk flowers, tamarind twigs, and golden balls.

Growing up in Bacolod, Rodriguez honed his talent by helping his mother craft Christmas decorations.

In Manila, he headed the human resources and administrative departments of a holdings company.

Weary of corporate life and eager to satisfy his creative urge, he opened a floral business, even without formal training. He eventually grew a clientele that included deluxe hotels during Christmas.

For the past seven years, Rodriguez has been decorating Bellevue Manila, and subsequently Bellevue in Alabang and B Hotel, the boutique hotel in Quezon City.

For the 68-year-old survivor of heart ailment, decorating hotels has been a life line.

“I don’t mind the sleepless nights putting up the décor. It’s all done out of love,” he says. –CONTRIBUTED