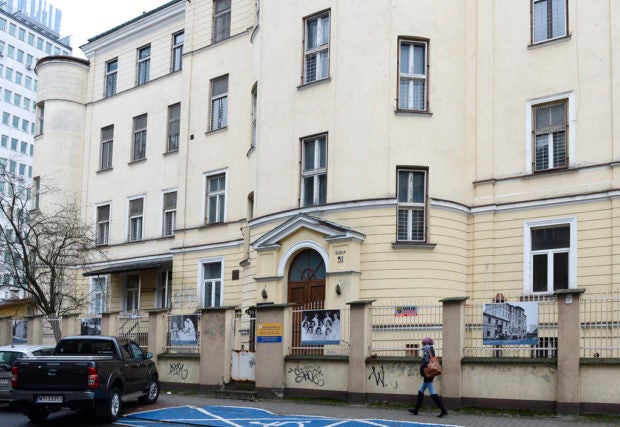 A person walks past the building where the 'Warsaw Ghetto Museum' will be located, in Warsaw, Poland, Friday, Dec. 14, 2018. The Polish government announced plans in March to create a museum dedicated to the Jews imprisoned in the ghetto and tortured and murdered by German forces during their occupation of Eastern Europe. (AP Photo/Alik Keplicz)

Historian lays out vision for new Holocaust museum in Warsaw

WARSAW, Poland — The Warsaw Ghetto Museum should be an ambitious state-of-the art facility —”the major Holocaust museum in Poland” — when it opens in 2023, its newly appointed chief historian said Friday.

The Polish government announced plans in March to create a museum dedicated to the Jews who were imprisoned in the Warsaw ghetto and then tortured and murdered by German forces during their World War II-era occupation of Poland.

But Daniel Blatman, a Holocaust historian at the Hebrew University of Jerusalem, described a mission for the museum that is much broader and more ambitious.

“What I would like to achieve is a wide perspective of Jewish life and death during the Nazi occupation through the perspective of the history of the Warsaw ghetto,” Blatman said, describing plans to address the experiences of Jews elsewhere in Poland, including in the many other ghettos created by the occupying Germans.

“I want this to be the major Holocaust museum in Poland,” Blatman said.

He presented his vision at a news conference in Warsaw and in a separate interview with The Associated Press.

Blatman noted that while Poland has many authentic World War II memorial sites, like Auschwitz and other former Nazi death camps, and a major museum in Warsaw dedicated to the 1,000-year presence of Jews in Polish lands, it actually has no major museum dedicated only to the Holocaust.

Polish Jews numbered about 3.3 million on the eve of the Holocaust and most were murdered. While much can be learned at Auschwitz, with exhibitions housed in old barracks and the remains of structures where human beings were gassed and burned, that death camp was used mainly to kill Jews transported from elsewhere in Europe.

Poland’s Jews — who made up 10 percent of Poland’s population — were mostly killed in other death camps, including Treblinka, Belzec and Sobibor, Blatman said.

One guiding principle of the new museum will be to portray the fate of Poland’s Jews as part of both Jewish history and Polish history.

“Polish Jews who perished during the Holocaust perished as Polish citizens of Jewish origin. And I believe that the right way to present the history of that in Warsaw is to find ways to integrate it into the overall picture of this city under Nazi occupation,” he said at the news conference. “There was a wall separating Jews and Poles during the Holocaust but that wall was created neither by Jews nor by Poles. It was created by the Germans.”

Another key aim will be to portray the unique experiences of religious Jews under Nazi occupation.

The 65-year-old’s own family history was shaped by the Holocaust.

His father was a Polish-born Zionist who at 17 left to settle in Israel in 1936 — three years before German dictator Adolf Hitler’s invasion of Poland that unleashed the war. His father returned to Warsaw for a visit in 1938 which turned out to be the last time he saw his parents, who probably died in the ghetto. Nine brothers and a sister of his father’s perished at the Treblinka death camp.

“I grew up with a sense of a black hole because of my father’s experiences,” Blatman said. “He never recovered from not being able to get his parents out of Poland before the war and not knowing exactly how they died.”

The museum is to be housed in a former children’s hospital established by Jewish philanthropists in the late 19th century and which during World War II was enclosed within the ghetto’s walls. Extensive renovations are needed.

Museum director Albert Stankowski and other officials are considering adding extensions to the building or digging below ground level to create more floor space.

Other top positions must still be filled, including a chief curator, more historians and a design team.

The museum is scheduled to open in 2023 on the 80th anniversary of the uprising by Jews in the Warsaw ghetto. MKH