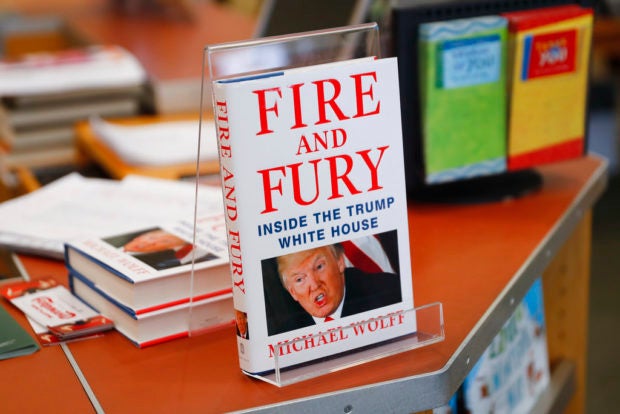 FILE - This Jan. 5, 2018 file photo shows three remaining copies of the book "Fire and Fury: Inside the Trump White House," by Michael Wolff, displayed at a Barnes & Noble store in Newport, Ky. It landed in early January and quickly had the country talking and President Donald Trump threatening to sue. (AP Photo/John Minchillo, File)

From Trump to #MeToo, publishing made headlines in 2018

NEW YORK — The publishing world made headlines in 2018, and not always by design. A wave of best-sellers offered damaging accounts of Donald Trump’s White House, a million-selling memoir by Michelle Obama had readers longing for the previous administration and a political thriller by former President Bill Clinton had some taking a closer look at a White House scandal from the 1990s. Meanwhile, some of the country’s top writers were called out for sexual harassment and a Dystopian novel written in the 1980s seemed ever more timely.

Here are some highlights:

Fire and Fury: It landed in early January and quickly had the country talking and Trump threatening to sue (a way to boost sales that ranks with an Oprah Winfrey endorsement). Michael Wolff’s tale of backbiting and chaos in the Trump administration wasn’t so much a revelation, as a confirmation of what millions had suspected. Reporters questioned some of his facts but the book had at least one real consequence: Former senior advisor Steve Bannon, who didn’t deny speaking with the author and criticizing both the president and Donald Trump Jr., was forced out as executive chairman of the far-right Breitbart News. His old boss called him “Sloppy Steve.”

#METOO: It began in January with a comments thread on the website of School Library Journal: Stories of widespread harassment by some prominent writers for children and young adults, with the alleged harassers first unnamed, then named. Within weeks “Maze Runner” author James Dashner had been dropped by his publisher and “13 Reasons Why” novelist Jay Asher by his agent. Sherman Alexie, whom the American Library Association had just awarded a Carnegie Medal for his memoir “You Don’t Have To Say You Love Me,” declined the prize. And Daniel Handler of “Lemony Snicket” fame withdrew as commencement speaker at Wesleyan University. His replacement was well known to the #MeToo movement: Anita Hill, the woman who testified in 1991 that Supreme Court nominee Clarence Thomas had repeatedly harassed her. “Speaking out, despite the hardship,” Hill told the students, “can be self-liberating and can empower others.”

A Higher Loyalty: In a spirit of anger, admiration and curiosity, readers wanted to know why James Comey re-opened the FBI investigation into Hillary Clinton’s emails less than two weeks before Election Day and what he and Trump had said to each other before Trump fired him in May 2017, just four months into his administration. “This president,” Comey wrote, “is unethical, and untethered to truth and institutional values.” Only in the Trump era could a memoir by a former FBI director, one little known to the general public before 2016, sell hundreds of thousands of copies. And only in the Trump era would a sitting president refer to a former FBI director as an “untruthful slimeball.”

Passages: Within eight days last spring, two of the country’s most celebrated writers died, Tom Wolfe and Philip Roth. But 2018 also was a year for welcoming new voices. Tara Westover’s “Educated,” a memoir about growing up in an isolated Mormon home, was a best-seller admired by everyone from book critics to former President Barack Obama. Tommy Orange’s novel “There There” was widely acclaimed and the rare work of literary fiction over the past year to succeed commercially. Other notable debuts included Jamel Brinkley’s story collection “A Lucky Man” and Lisa Halliday’s novel “Asymmetry,” which included a character based on a real-life former lover — Philip Roth.

The President is Missing: The million-selling collaboration between Clinton and James Patterson was the novel of the summer, and launched a very different conversation from what the authors had intended. “The President is Missing,” a near-apocalyptic thriller, is a cautionary tale about preventing cyber attacks. But the book also included a chapter about a president facing impeachment — an experience Clinton is uniquely qualified to draw upon — and Clinton responded defensively to questions about his affair with White House intern Monica Lewinsky. “This was litigated 20 years ago,” Clinton told NBC’s Craig Melvin. The most notable thing about his answers, wrote New York magazine’s Rebecca Traister, was that “Clinton seemed to be shocked that he would be asked about his behavior in light of #MeToo.”

Fear: Bob Woodward, a brand name for inside White House politics, seemed to withdraw during the Obama years. His two works on Obama, “The Price of Politics” and “The Last of the President’s Men,” made little impact compared to such early blockbusters as the Watergate-era “All the President’s Men.” And his only book during Obama’s second term was a return to the Nixon years: “The Last of the President’s Men,” about Alexander Butterfield, the White House aide who revealed to the world that Nixon had a taping system in the Oval Office. But Trump is a singular muse for political writers and with “Fear: Inside the Trump White House,” Woodward was fully back in the present.
“Fear,” Woodward’s hottest seller in years, read like a more sober version of “Fire and Fury,” another tale of an uncontrollable chief executive and a staff that tries both to contain and encourage him. Trump’s verdict: “The Woodward book is a Joke.”

Becoming: The initial headlines were about Trump, whom Michelle Obama vowed she would never forgive for promoting the “birther” lie that her husband was born in Kenya. But Obama’s book quickly became among the best-selling political memoirs ever. Reviewers cited the qualities which millions had admired her for — the warmth and humor of her courtship with the future president, her candor in describing their marital struggles and efforts to have children and the care and insight into how Michelle LaVaughn Robinson — a self-described “girl of the South Side” of Chicago — adapted to being the country’s first black first lady.

Margaret Atwood: The Canadian author didn’t need to publish any new fiction to make news in 2018. “The Handmaid’s Tale,” released more than 30 years ago and dramatized in an acclaimed Hulu series, continued to rank with George Orwell’s “1984” as a defining dystopian text for the current time. Questions from readers about the imagined country of Gilead, a brutal patriarchy that didn’t seem very fictional, were so persistent that Atwood finally changed her mind about writing a sequel and announced that “The Testaments” would come out in 2019. MKH

Why Filipinos should care about ‘Fire and Fury’