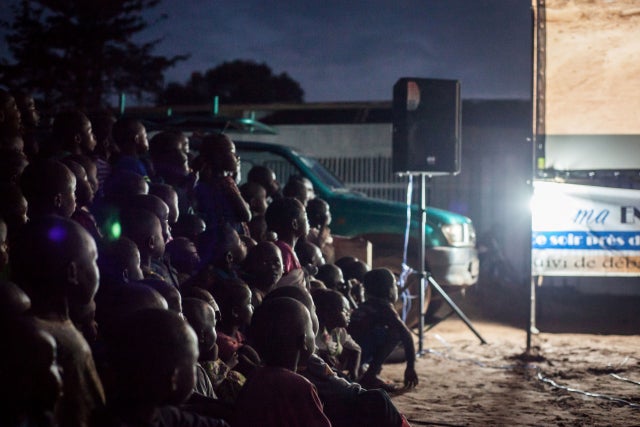 A giant screen flickers to life in a remote village in the equatorial forest of the Central African Republic.

Some 200 villagers avidly take in an evening of films thanks to a traveling cinema team with the dual goal of entertaining and enlightening.

Ambulant Digital Cinema (CNA) brought its show to the southwestern village of Bayanga along bumpy rutted tracks, aiming to reach people living in remote parts of a deeply poor country scarred by violence.

“Some people are astounded when they see a car, so imagine what it’s like when we’re projecting films,” said Serge Mbilika, a state television journalist who brought CNA into the light of day in April 2018.

Silence falls across the clearing among the mango trees once a presenter announces the first film, her voice rising over birdsong and the chirping of crickets.

Then a booming voice surprises the audience. “If you don’t register your identity, you won’t be able to receive your retirement pay!” warns a man on the giant screen.

Before the show, Mbilika spent the afternoon strolling around the streets of Bayanga with his compact camera, filming villagers as they went about their business.

“This helps us to attract people’s attention before the projection,” said Carmelle, the presenter. “Going to see them and filming in the afternoon gets people interested by word of mouth.”

During the show, which follows an hour of music and dancing, the viewers laugh to see themselves on the large screen.

‘Force her to go to school’

“What do you want with that thing of yours?” a taciturn woman asked Mbilika in Sango, the local language, while grinding cassava a few hours earlier.

The prime aim of the roving cinema is to raise awareness of issues such as proper hand-washing methods, the need for vaccinations and the ethics of forced marriages. The last film of the evening in Bayanga concerned girls’ education.

“I didn’t think that was a problem,” said Maeva, a woman who had come to Bayanga with her young son in her arms to see the films, along with many other inhabitants of a Pygmy village 10 kilometers (six miles) away.

“My daughter stays to help me with the house. She looks after it while I’m in the forest. But now I’m going to force her to go to school,” Maeva smiled.

For team leader Mbilika, the evening was a success. “We thought this was the best way of reaching out to people in remote regions. The big screen leaves its mark on some minds and they will talk to others about what they learned.”

‘A means to bring peace’

Mbilika is also convinced that cinema can serve as a means to help people to live together with respect after violence between armed groups erupted into civil war in 2012 over natural resources and religious convictions.

“The cinema can be a means to bring peace to Central Africa,” he said.

CNA’s films, which come from a variety of countries, may not always hit home, such as one from Cameroon featuring people wearing djellabas and debating marital status. It was dubbed into Sango, but the original Arabic could still be heard.

“The problem is that this doesn’t necessarily get through to the people,” whispered Franklin. “Central Africans find it hard to identify.”

‘In the public interest’

“We could make proper films — two of us in the group are journalists — but the problem is that there’s no money,” Franklin said.

The UN Children’s Fund (UNICEF) and the Alliance Francaise provide the funds required for traveling the country and to show some of the films. The bulk of the equipment comes from CNA Afrique (Cinema Numerique Ambulant – Afrique), which networks mobile teams in nine West and Central African countries.

The team’s car, for example, is a gift from the Cameroonian CNA. However, it is only two-wheel drive, the suspension is shot and the chassis broke in two during the last mission.

“It’s dangerous when the roads are already difficult,” said Vivien, the team’s driver. “What’s more, we’ve made plans to go to Bambari, which is in a tense area.”

Since good roads are virtually non-existent in the CAR, vehicles are routinely battered and damaged. “We need to find partners to change this car,” said Olivier Colin, the director of the Alliance Francaise in the capital Bangui.

“This cinema is in the public interest!” he exclaimed. NVG