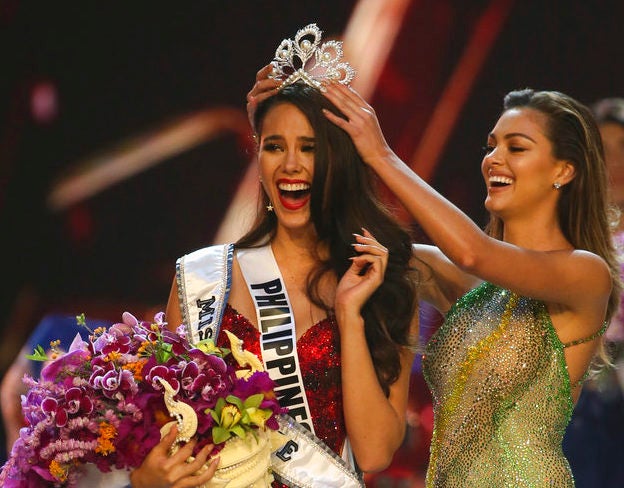 Gray was hailed as Miss Universe 2018 during the coronation held at the Impact Arena in Bangkok, Thailand, on Monday.

The 24-year-old beauty queen from Albay bested Miss South Africa and Miss Venezuela in the Top 3, as well as candidates from 91 other countries, to take the crown.

During the Top 5 question and answer portion, Gray was asked about her stand regarding the legalization of marijuana.

“I’m for it being used in a medical use but not so for recreational use, because I think if people were to argue what about alchohol and cigarettes, well everything is good but in moderation,” Gray said.

For the final question, Gray and her Top 3 contenders were asked: “What is the most important lesson you’ve learned in your life, and how would you apply it to your time as Miss Universe?”

Gray answered: “I work a lot in the slums of Tondo, Manila and the life there is very poor, sad and I’ve always taught myself to look for the beauty in it, to look in the beauty of the children and be grateful.”

“I would bring this aspect as a Miss Universe to see situations with a silver lining and to assess where I could give something, where I could provide something as a spokesperson.”

“If I could teach people to be grateful, we could have an amazing world where negativity could not grow and foster and children would have smiles on their faces.”

The coronation was hosted by comedian Steve Harvey and supermodel Ashley Graham, while American singer-songwriter Ne-Yo performed at the competition.

Gray bagged the country’s fourth Miss U title, following Pia Wurtzbach in 2015, Margie Moran in 1973 and Gloria Diaz in 1969. /cbb