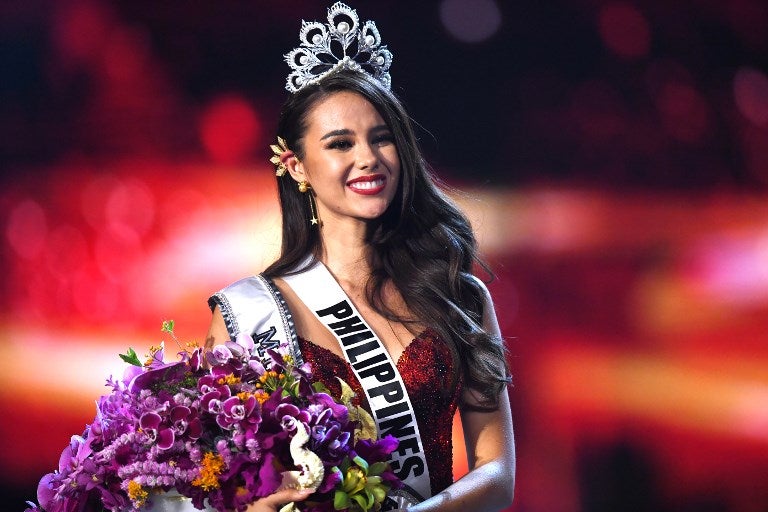 Catriona Gray of the Philippines smiles after being crowned the new Miss Universe 2018 on December 17, 2018 in Bangkok. AFP

OAS, Albay – In recognition and appreciation for bagging the country’s fourth crown in the Miss Universe pageant, the local government of Catriona Elisa Magnayon Gray’s hometown Oas is planning to erect a life-sized statue of her in their People’s Park.

Gray, whose mother Normita Ragas Magnayon hails from this town, was announced the 67th Miss Universe, besting 93 other contestants Monday at the IMPACT Arena, Bangkok, Thailand.

On Monday, Albay residents’ eyes were glued to their television sets in all-out support for Gray as she made her way through the catwalk with her iconic “lava walk” and slow-mo twirl.

Local government units, particularly in Oas, has set up viewing centers with big screens in their respective multi-purpose halls and basketball covered courts to allow hundreds of residents to view the international beauty tilt.

At around 11 a.m., when Miss Universe host Steve Harvey announced Miss Philippines as this year’s Miss Universe, shouts of joy and applause suddenly reverberated in every home, restaurant, school and public places in Albay.

Mayor Domingo Escoto Jr. told Inquirer that they want the statue to let the future generations know that “here, we had a Miss Universe,” who represented Oas and the country.

Escoto said that if the plan materializes, the statue will be the same size as Gray.

“This is just a plan. We will still ask for consent and we will consult (people) if this can be done,” Escoto said.

“This is one of the ways we are thinking of honoring Ms. Gray for the honor that she brought to us,” he said.

Escoto said that they see nothing preventing them from building a statue for her.

Multi-awarded author Abdon Balde, Jr., also an Oas native, also supported the plan to erect a statue for Gray, suggesting that the sculptor should incorporate the lava-inspired gown that Gray wore during the pageant’s evening gown competition.

“They could commission a good sculptor to do an image of [Gray] with the now famous lava flow gown [while] holding the Miss Universe trophy and make it a cultural icon. They could choose a good public place to set it up, maybe inside the newly renovated garden park,” he said.

“Truly an Albayana, she was the most prepared candidate ever – if you prepare to fight calamities, the more you are prepared for victory,” Albay Representative Joey Salceda who hails from the neighboring town of Polangui, said in a statement after Gray was crowned.

Salceda said Gray is as regal as Mayon Volcano is majestic.

“She is beautiful, truly Daragang Magayon (beautiful lady),” he said.

He said the entire province is happy and proud of her achievement as proud she is of her roots.

“I worked with Catriona in her previous quests and she was excited about her role as tourism champion for Albay,” he added.

Escoto also said that they understand that Gray’s schedule would be busy from now on.

But he said that if “people can help us invite her for a homecoming,” they will give her a hero’s welcome and a motorcade around Albay, and if possible, up to Camarines Sur province.

“Her lava walk, no one else can do that except her. In my personal assessment, I think only she can do that, especially the slow-motion walk. Even her answer. It was as if the Miss Universe crown was really destined for her,” Escoto said.

Some of the Ragases, Gray’s family from her mother’s side, were present at the live viewing in this town’s tennis court, just in front of the municipal hall, for those who could not watch from their own houses or those who wanted to watch with their fellow Oas residents.

Salve Ragay-Dineros, Gray’s grand aunt, said that they were ecstatic about her win. Dineros also said that they are happy about the plan of erecting a statue of Gray in Oas.

“We have been in contact with her mother before they went to Thailand.

They were ecstatic about it. You know how hard it is win if you are one of the 94, but she answered [the question] coming from the heart.

She was just natural. She was very good in answering. Throw any question at her, her answers are really well thought of,” Elmer Ragas, Gray’s grand uncle who is based in Legazpi City. With reports from Mar S. Arguelles and Michael Jaucian, Inquirer Southern Luzon/ac