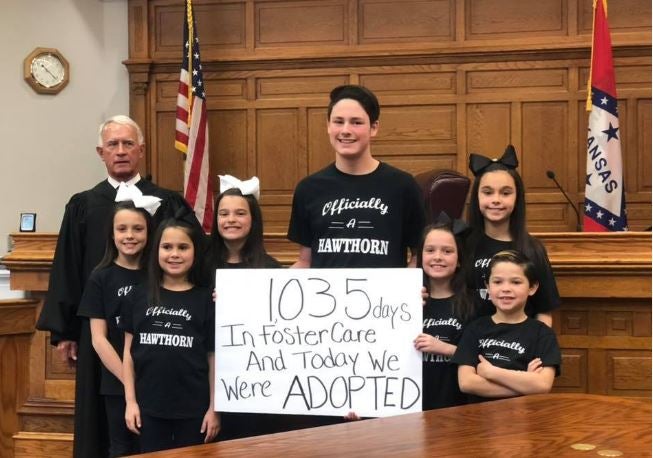 One couple from Arkansas, United States may have just given seven siblings the best Christmas of their lives when they adopted the brood, after almost three years of being in foster care.

Terri and Michael Hawthorn did not think they would be adopting any children, but the opposite was what came to be despite deciding years ago they would only be foster parents.

It was last April when the Hawthorns first adopted a set of two siblings, which they named Korgen and Haizlee. Eight months later, this December, they added seven more children to their brood after the court had finalized the adoption, as per THV11 last Dec. 7.

Seven more may seem a stretch, especially since the couple already have four biological children of their own and the two siblings they adopted last April, but it seems more is definitely merrier.

Michael took to Facebook last Dec. 4 where he shared photos of the seven siblings. He said, “Today it is official, these 7 siblings changed their last name to Hawthorn. Many prayers for these kids over the last 2 1/2 years.”

Today it is official, these 7 siblings changed their last name to Hawthorn. Many prayers for these kids over the last 2…

Despite being in retirement age, Michael wrote that he and Terri have chosen instead to “invest in the lives” of the children.

“Most people my age are only concerned in retirement (that would be nice) but over that we have chosen to invest in the lives of these kids,” he wrote. “Me and Terri have gone from 4 kids to 13, no typos 13, let that sink in…”

The kids’ joy over being adopted after years of waiting could not get any more palpable. They also found themselves in disbelief that they would be getting their own beds and be able to eat enough food in their new home.

“When I got here I was like, oh my gosh, we get our own beds,” Layna Hawthorn was quoted as saying.

“We never got that, we had like one bed and most of us slept on the floor,” shared Kyndal. “The only times we got to eat is when our neighbors would sneak us a bag of chips. We didn’t have a can opener, and they’d give us the cans that we didn’t know how to open so sometimes we just didn’t eat.”

Meanwhile, Michael joked to his readers to keep his family in mind should they win in the lottery in the future.

“If anybody hits the lottery keep us in mind, in the market for a 15 passenger van so we don’t have to take 2 vehicles everywhere we go,” he said in jest. “In all seriousness, we would appreciate your prayers.” Cody Cepeda/JB

Parents, advocates call for end to stigma vs adopted kids