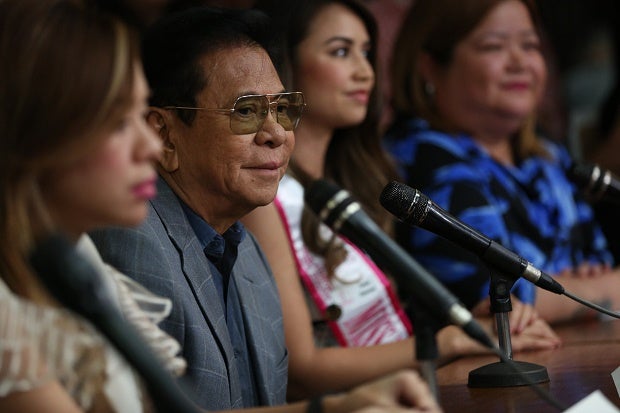 Narvacan Councilor Luis “Chavit” Singson, one of the funders for the Philippines’ hosting of the Miss Universe 2017 pageant, joins the press briefing on the pageant in Malacañan on Dec. 9, 2016. (Photo by TOTO LOZANO / Presidential Photographers Division)

MANILA, Philippines — The Miss Universe 2019 beauty pageant will take place in South Korea with the participation of North Korea, according to businessman-politician Luis “Chavit” Singson.

[From the time I started sponsoring, every year I have helped them. So when it was held in Bangkok, I also helped. Next year, I have arranged it in South Korea and North Korea will also join.]

As Miss Universe 2018 Catriona Gray was leaving for New York, Singson also bared that the beauty queen might return to the Philippines in January or February for a “formal welcome.”

[She’s leaving for New York tomorrow because a lot of people want to meet her. But she will be back by January or February so that the Philippines may give her a formal welcome.]