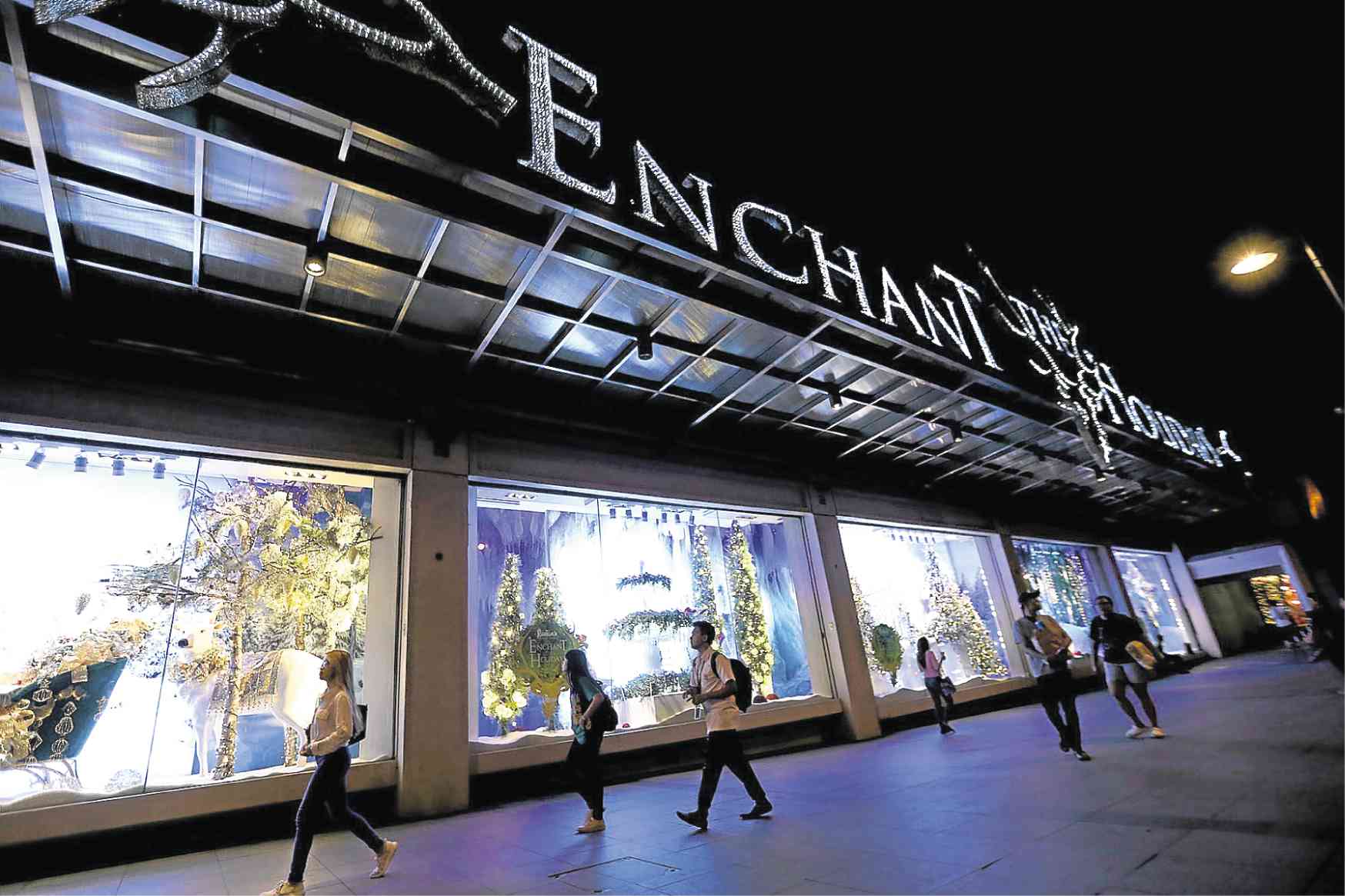 In front of the golden gate, two giant polar bears wearing blue crowns are flanked by golden Christmas trees, decked in green and clear balls and flickering string lights. Behind the gate are snow-covered fir trees, etched against the deep blue sky.

The location is not the North Pole or a theater set, but the display windows of Rustan’s Makati facing Ayala Avenue. The bears beckon onlookers.

On a Saturday morning, a mother is taking a portrait of her son by this window. Suddenly, the daughter points to another window where reindeer, garlanded with tinsel and golden balls, watch over a velvet sleigh, overflowing with gifts.

Rustan’s Makati creates stories every Christmas through its window displays. They’ve become a family destination that makes children gasp with glee. It prompts passersby and customers to take selfies.

Rustan’s marketing communications manager Dina Tantoco says, “Everything about the ‘Enchanted Holidays’ campaign is about bringing out the inner child. The windows are supposed to be like a dream. You are transported to the Enchanted Forest. Unlike in the past where we showed brands, these windows don’t have any merchandise.”

The windows are a collaboration between Rustan’s creative director Ricardo Preto, the visual merchandising and marketing teams.

Preto says the “Enchanted Holidays” theme drew inspiration from Hollywood fantasy movies such as “The Nutcracker and the Four Realms.”

“Christmas evokes emotions, and it’s all about creating magic,” he says.

As a nod to local tradition, Rustan’s tapped artisans from Paete, Laguna, known for taka or papier-mâché folk art. The figures, made of newsprint, brown paper and starch, are molded on a wooden sculpture and dried in the sun. Once they are firm, the mold is removed, the figures recast, dried again, then painted.

Although the figures are huge, they are lightweight.

“Normally, the windows are full of products. It’s more powerful to show animals in an Enchanted Forest. People are attracted to animals, shiny things and color. They won’t pay attention to a dress,” Preto says.

Customers can bring their families to enjoy the store’s weekend activities, listen to choir music, look at more Christmas displays inside and dine at the Christmas Café.

Visual supervisor Andy Ensimos says the main window on Ayala Avenue is an interpretation of a painting of snow-covered trees and a mysterious, opened gate. In every window, a light box of snowy landscapes adds visual depth at night and unifies the whole setup.

Papier-mâché reindeer with sequined mantles guard the sleigh of gifts, amid a backdrop of whitewashed logs. It’s as if snow was melting on the trees.

Mice with mufflers are playing with hefty snowballs.

Unicorns are about to touch each other’s horns under beaded chandeliers with boughs of leaves and blue Christmas balls.

On Courtyard Drive, Santa Claus is flying on a swan instead of his conventional sleigh over the birch trees.

Two moose, with vine-covered crowns and necklaces made of blue bubble garlands, emerge from a forest, guarding Christmas presents.

Owls are ringing church bells over a fallen tree.

“Somebody commented on social media that it was Harry Potter-ish,” Ensimos says.

Under a bower, a panda sits contentedly carrying vines and snow-covered branches.

“We are putting Rustan’s in its proper place as a leader, by setting the tone through the Christmas windows,” Preto says. –CONTRIBUTED