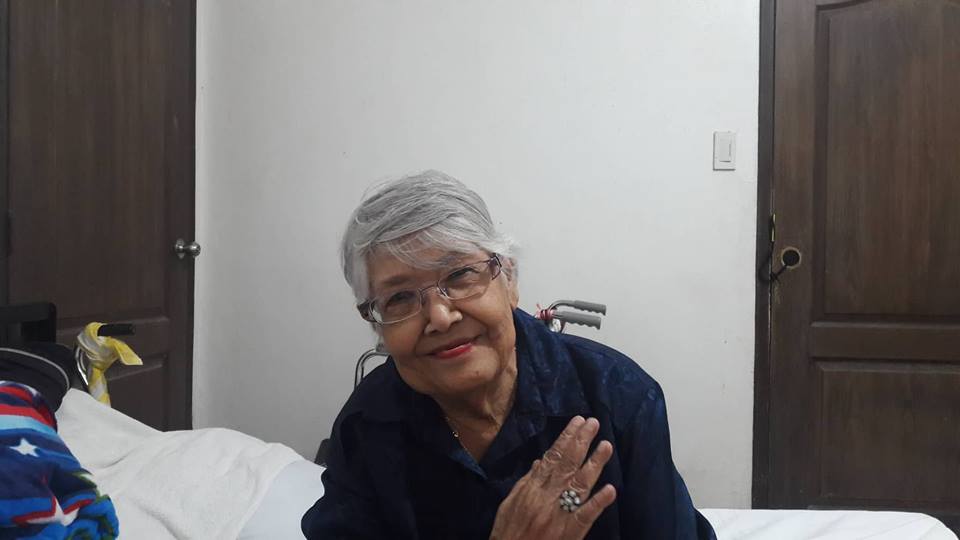 Home alone together: Elderly in care facility speak out their Christmas wishes

For Filipinos, Christmas is the time of the year when family members, wherever they may be in the world, go back home or get together, be it physically before a feast, or virtually via social media to at least catch up. But what if one no longer has a family to celebrate the holidays with? Even in the case of the elderly left on their own, it is possible to feel a sense of family.

In the heart of Rodriguez, Rizal lies Anawim, a little piece of heaven on earth for the poor, rejected and abandoned elderly. Founded in 1996 by Catholic lay preacher Bo Sanchez, the facility provides a home for lolos and lolas who were either forsaken by their loved ones or have nowhere else to go.

INQUIRER.net went to Anawim to ask five elderly what their Christmas wishes are. Four lolas and one lolo shared their background stories, as well as priceless advice they have for the Filipino youth.

Lola Leonila, who has been living in Anawim for four years, hails from the province of Negros Occidental. The 86-year-old recounted that during World War II, after her father died, her mother who had no means of supporting her, “lent” her to her mother’s rich sibling who can afford to do so.

The young Leonila then strived to make a living as a maid at the age of 19 in Cabanatuan City. Her luck changed when she met “Student Canteen” and “Discorama” host and producer Bobby Ledesma whom she then worked for as a cook.

Lola Leonila said she met and cooked for celebrities including the members of Apo Hiking Society, Rico J. Puno, Dawn Zulueta and Connie Reyes. When Ledesma and her husband (whom she had no children with) died, she was employed by a pilot of a local airline. She later asked her employer to send her to Anawim rather than to send her back to her family.

This Christmas, Lola Leonila’s wish is for her to die in peace when the time comes. Spoken like a true lola, she wanted to remind the youth to curb their use of mobile phones: “Wag mag-cell phone cell phone habang naglalakad [sa kalye] (Don’t use your cell phone while walking along the streets).”

There is only one word to describe Lolo Napoleon, who has been residing in Anawim for only a short while: reserved. Still hurting from his sibling’s decision to put him in the facility, the 68-year-old refused to go into detail about his past, only saying that he has no family to be with at home.

This Yuletide season, Lolo Napoleon’s one wish is to have a phone of his own so that he can call his sibling whenever he wants to. In Anawim, the elderly are not allowed to have their own gadgets for security purposes. Instead, they can talk to their loved ones using the telephone in the office.

Lola Feliza, 67, was given away by her birth mother to her adoptive parents at birth. Growing up to a well-off family, she admitted to being lazy and a truant which resulted in her remaining in college at the age of 27.

The retired teacher, who also was a novice for ten years, graduated with an English degree. Living in Anawim for already four months, she shared that no loved ones visit her, and that she is content with the company of the people who pay the facility a visit.

Lola Feliza wishes for her to not to be forgetful this Christmas. Because she plans to embroider priests’ garments, she wishes for her eyesight not to fail and her health to remain at its best. Drawing from her experiences, she wants the youth to remember this: “Mag-aral mabuti kasi anong gagawin n’yo kapag kayo’y mag-isa na lang (Study well because what are you going to do when you’re on your own).”

Just like Lola Leonila and Lola Feliza, it was Lola Violeta’s decision to go to Anawim. The 79-year-old, who has been in the facility for nine years, said she likes it that a lot of people love her even if they do not share the same blood.

She also takes pride that she discovered her talent for singing in the institution, earning her the following titles: “Anawim Pop Superstar,” “Anawim Got Talent,” “Ms. Anawim” (for 8 years) and “Millennial Anawim.” While her relatives rarely visit her, the former beautician is happy that her best friend’s daughter regularly goes to the facility to check on her and bring her whatever she needs.

She shared that she had been close to the late Fernando Poe Jr., calling him her older brother, when she was working as a housekeeper in Mariveles, Bataan. She said her greatest regret was that she was not able to have a photo with the action star.

This Christmas, Lola Violeta’s wish is for her to see her relatives. She also reminded the youth to express their love and affection for their parents while they are still alive.

Lola Eugenia (not her real name) has been living in the institution for three years. Unlike other lolos and lolas whose families have completely abandoned them, Lola Eugenia’s relatives visit her four times a year, bringing her food and books.

The 85-year-old’s Christmas wish is for God to forgive her sins — she said she is willing to go through purgatory to be cleansed because she does not want to go to hell. When it comes to the youth and technology, she has one thing to say: “Modern technology is helpful, necessary, but sometimes, these modern inventions can prevent you from using your brain.”

Family ties in the Philippines — is it deteriorating?

Anawim center director Carlos Ferdinand Dimson said the growing number of Anawim residents makes one wonder if family ties in the Philippines is slowly deteriorating. The facility has an average of 20 elderly admitted per year.

Facilities like Anawim deal with a variety of issues — from lack of financial support, to addressing the illnesses of the elderly. Dimson said that while there are many who volunteer for the sake of volunteering, what these facilities really need are the people who “have the heart to serve the least.”

As Christmas sets in and families celebrate together, it may not hurt to remember that there are people who still wish for a few simple things, not so much for material gain, but to equip themselves with a little more strength and joy, to still make the most of their remaining years. JB

Let this be your merriest Christmas ever

What moms tell kids about Christmas