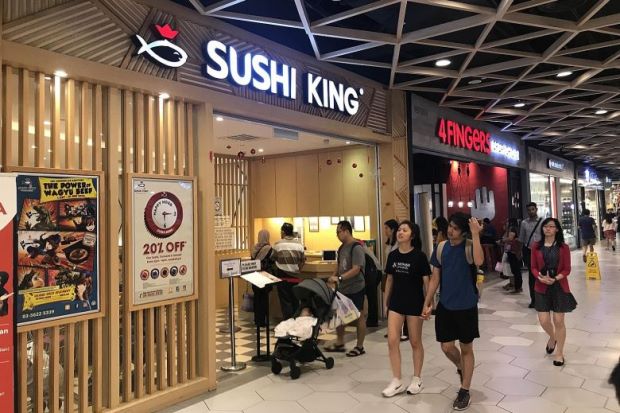 Restaurants say they dare not turn away customers who eat their takeaway orders on the premises for fear of the backlash on social media. THE STRAITS TIMES PHOTO

KL residents dine in on takeaway to avoid service fees

KUALA LUMPUR — Order takeaway food, eat it in the restaurant and save on paying service charges – this is how some Kuala Lumpur residents are coping with the rising costs of living in the Malaysian capital.

This cost-saving trick, however, comes at the expense of restaurant owners and their wait staff, who forgo the extra income they could have earned if the food was ordered to be eaten on the premises.

Many diners, however, don’t see why they can’t have their cake and eat it too.

“I don’t see anything wrong with it. It’s not like we’re eating outside food,” said 23-year-old college graduate Angeline Wong, who had spent about RM45 on her pizza lunch at Paradigm Mall in Petaling Jaya, and saved RM4.50 on the service charge.

The service tax is payable to the government and is charged on the food order regardless whether customers take away or eat in.

The service charge of 10 percent, however, is payable to the restaurant when diners order to eat in on the premises.

“Ten per cent and 6 percent are a lot,” said 29-year-old executive Siti Husna Ahmad, as she tucked into her RM19 bento set at a Japanese chain restaurant in Aeon Mall in Shah Alam.

Describing the practice as “partly her right” and a way of taking charge of her finances, Siti Husna said she did so only occasionally at select chain restaurants.

“I want to be able to enjoy the luxury of eating out without ripping a hole in my pocket,” she added.
Fellow Malaysians who work in the food service industry, however, are less enamored of customers like her, with some saying their employers lose thousands of ringgit every month as a result.

“Some of us feel like we’re being shortchanged. I also don’t find it ethical because the 10 per cent would have contributed to our income; the restaurant has made it clear,” said a manager at a Japanese chain restaurant at the same mall, who only wanted to be identified as Ahmad Izham.

The 36-year-old added that while the establishment he works for would not turn away such customers, he preferred it if diners were more considerate.

Maria Jane Fernandez, a 37-year-old manager at an Italian restaurant in Petaling Jaya echoed his sentiment, saying the practice is “unethical”.

“We thank them for supporting our business but personally, it’s not so much about not getting the 10 per cent, it’s more about violating our honesty. We try our best to be honest; that’s why we have a sign that says the restaurant charges service charge and tax,” she said.

Asked why restaurants don’t call out these customers or evict them from the premises, Fernandez said they had to consider their reputation and the potential backlash.

“We don’t turn away these customers because these days, people always take it to social media to shame someone. You never know when it is your turn, so that’s why we never say anything when some customers pull this stunt at our restaurant,” she said.

When contacted, the Malaysian Franchise Association – a non-governmental organisation which assists franchise businesses, including restaurants – said it was aware of the issue and both sides of the argument.

The association’s secretary-general, Mohamad Shukri Salleh, said: “While we urge diners to be more considerate, what these eateries can do is take advantage of the situation by turning it into a marketing strategy – use social media to show that many people actually go to their restaurants. It can be a win-win situation for all.”