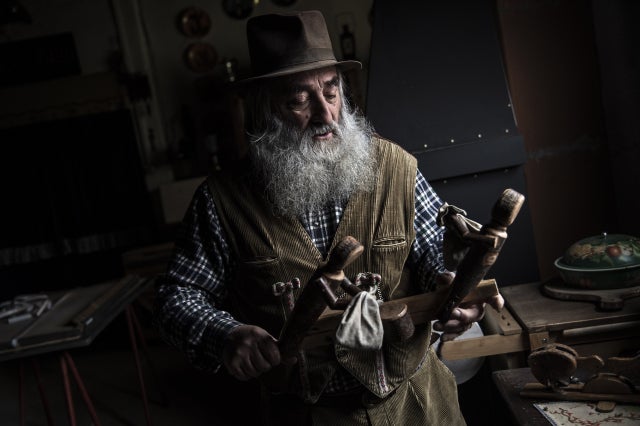 With his portly frame, bushy white beard and twinkling eyes, Italian toymaker and puppeteer Mario Collino could be a stand-in for Father Christmas.

But while he too carts around bags of toys made in his workshop, Collino, who performs under the name “Prezzemolo” (Mister Parsley), is more of a Mister Geppetto, the fictional carver and father of the fairytale hero Pinocchio.

He sketches the objects they describe, builds them from odds and ends in his Aladdin’s cave of a workshop near Cuneo in northern Italy, and then goes back to the retirement home with the finished product.

“I ask them if it matches up and then ask their permission to put their name on it,” he said.

His bag of antiquated tricks now runs to 138 toys, puppets and assorted curiosities which he uses in performances in schools, retirement homes and on street markets that leave viewers, young and old, entranced.

Nothing bought, nothing sold

Spinning tops, jumping jacks, a tea towel that becomes a rabbit with flapping ears, a piece of paper that, after a few folds, turns into a frog — the tools of Collino’s trade are simple objects brought to life by his wizardry.

Every toy comes with a story or fairytale in Italian or Piedmontese, the Romance language of his region. Some are set to the strains of a homemade barrel organ, with a monkey wrench serving as a handle.

Not for Collino the Xboxes and other newfangled, high-tech gizmos that many children have on their Christmas wish lists.

Nothing in his grotto is bought or sold.

All that is needed is a penknife, a diagram and a vast trove of discarded objects, from umbrella canes to springs, plastic pulleys and wire brushes, to create a toy collection to rival any high-street superstore.

His performances, which regularly take him across the border to France, are free of charge for spectators, with any compensation coming from festivals or other host institutions.

Such is his inventiveness he was invited to give a seminar for aspiring architects at Turin’s Polytechnic University.

A devout man, who regularly embarks on pilgrimages to the Santiago de Compostela shrine in Spain, Collino sees it as his Christian duty to nurture his inner child.

“The Lord said if you do not become like little children, you will never enter the kingdom of heaven. I took that at face value and so I’m still playing!” NVG

Toy makers turn to the toilet for poop-inspired toys