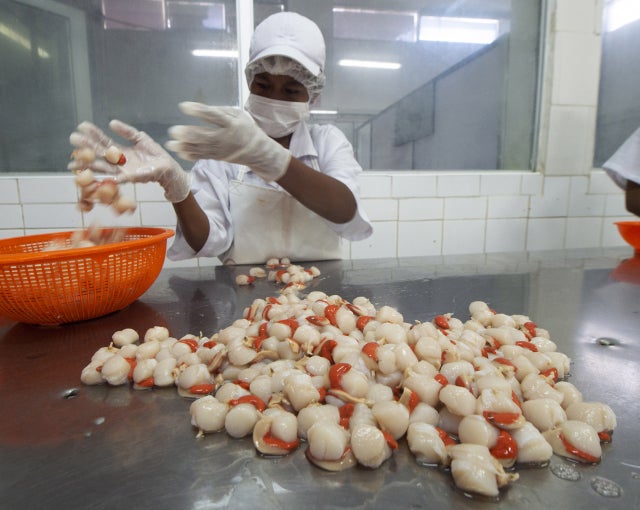 A woman cleans and sorts freshly-harvested scallops at a processing plant in Sechura in the Piura region, 1,100 kilometers north of Lima, Peru. Image: CRIS BOURONCLE / AFP

Peruvian fishermen need only dive down a few meters to find the scallops considered the “golden nuggets” of the country’s seas — and cherished in European and North American kitchens.

Sechura Bay, off northwest Peru’s Pacific coast near Ecuador, is the source of 80 percent of Peru’s exports of the seafood to France, Spain, the United States and Canada.

“God blessed us with this bay, it’s really good for scallop production,” fisherman Segundo Tezen told AFP aboard a small raft navigating the coast under the baking sun.

To harvest the hermaphrodite clams, divers hanging onto a hose plunge down three to five meters (10 to 16 feet) and gather them in nets that are then hauled up to the surface by two fishermen.

These treasures have converted Peru into a culinary superpower.

“These are golden nuggets of the Peruvian sea,” Wilmer Aguero, operations manager of the export company Cultimarine, told AFP.

Sechura Bay is known as “one of the major producers of scallops in the world,” he added.

The vast bay is divided up into eight production zones, with 200 fishing associations dedicated to harvesting the Peruvian scallop, or Argopecten Purpuratus.

Each day, around 200 boats unload 25 metric tons (27 US tons) of scallops at the Parachique fishing cove, one of 20 production and storage areas for mollusks.

They are then loaded into refrigerated trucks and taken to processing plants where they are washed, weighed, packaged and passed on to export companies that take them to the nearby port of Paita.

“The countries with the greatest demand are France, which consumes scallops with corals, and the United States, which buys a lot of scallops (with the roe, or coral, already removed),” Isabel Viza, owner of a processing plant in Sechura, told AFP.

“You have to constantly monitor the product in the sea,” said Tezen.

Although now a hugely lucrative industry, it is a relatively new one in Peru, having begun just 15 years ago.

According to official statistics, 18,000 tons of scallops were harvested throughout the country from January to September this year.

The National Society of Industries says scallop exports earned $56.1 billion between January and November, during which time 4,557 tons of these clams were sent abroad. France alone accounted for 1,208 tons. NVG