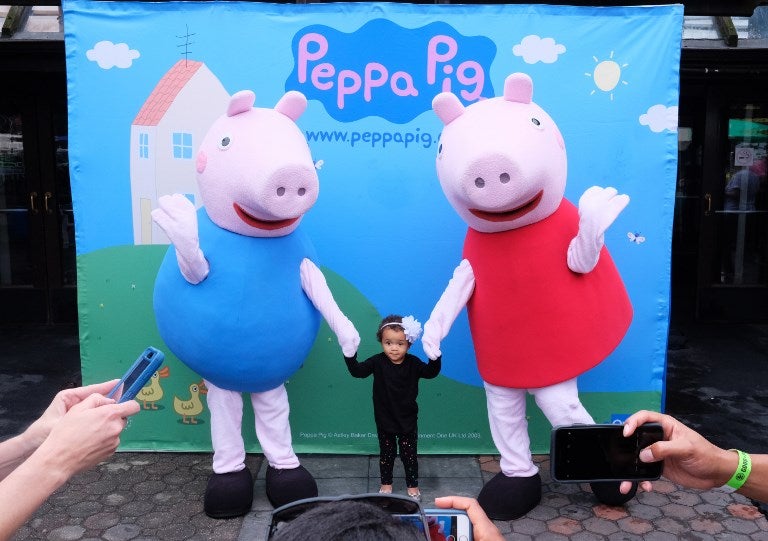 NEW YORK, NY - MAY 31: Children pose with Peppa Pig during GOOD+ Foundation's 2018 NY Bash sponsored by Hearst on May 31, 2018 in New York City. Nicholas Hunt/Getty Images for Good Plus Foundation/AFP

China to mark Year of the Pig with ‘Peppa Pig’ movie

BEIJING, China — China is set to mark the Year of the Pig with a film starring “Peppa Pig,” the popular British cartoon character that fell foul with its censors earlier this year.

The series, introduced in the mid-2000s in China, has become extremely popular through episodes dubbed into Mandarin.

This fervor intensified at the end of 2017 among a young adult audience. Many internet users including stars sported temporary “Peppa Pig” tattoos in selfies, and cups, watches and clothes appeared bearing the image of the heroine Peppa.

A Chinese internet platform in May gave “Peppa Pig” the chop as state media lamented the series had become a “subversive” icon for slackers and anti-social young people.

At least 30,000 clips of the British cartoon were removed from the popular Douyin video-sharing platform, while the #PeppaPig hashtag was banned from the site.

People who upload videos of Peppa Pig tattoos and merchandise and make Peppa-related jokes “run counter to the mainstream value and are usually poorly educated with no stable job,” state-run Global Times said after the ban.

“They are unruly slackers roaming around and the antithesis of the young generation the [Communist] party tries to cultivate.” /cbb