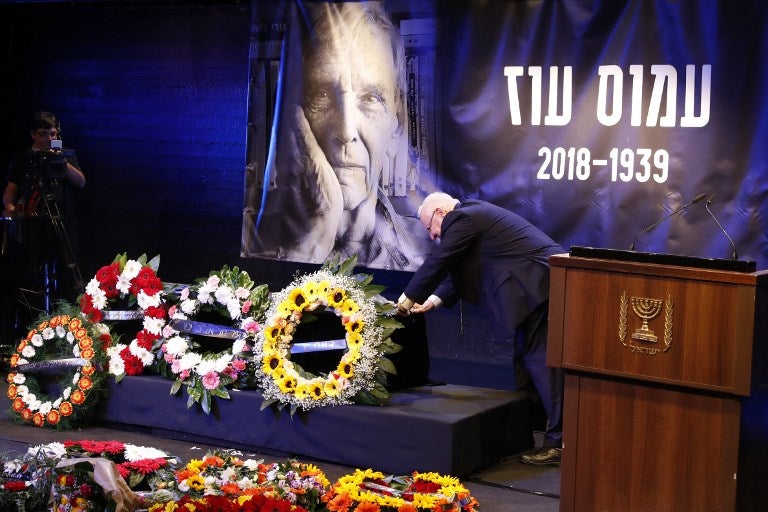 Mourners paid tribute on Monday, Dec. 31 to Amos Oz, the revered Israeli writer and peace advocate who died aged 79, at a memorial ahead of his burial later in the day.

Hundreds of people lined up at a small theatre in central Tel Aviv, where Oz’s closed casket lay on the stage ahead of eulogies from speakers including Israeli President Reuven Rivlin. Family members, politicians and average Israelis touched by Oz’s works and deeds slowly filed past the black coffin ahead of the ceremony.

Yona Kranz, 74, from the central city Givatayim, vividly remembered the first time he saw Oz decades ago when the author visited his kibbutz to talk about his first book.  Kranz said he came to say farewell to Oz, who died on Friday, because he “epitomized a myth of an Israel that might have existed and might have not, but I loved that myth”.

“If there is such a thing as a real Zionist, I think he was one,” Kranz said of Oz.

Following the memorial in Tel Aviv, Oz’s burial was set to take place at the Hulda kibbutz in central Israel at 3:00 pm.

Oz was a celebrated novelist whose stirring memoir “A Tale of Love and Darkness” became a worldwide bestseller that was adapted into a film by Hollywood actress Natalie Portman. His death led to an outpouring of tributes within Israel and from abroad.

While his writing is widely acclaimed, he was perhaps equally known as one of the earliest and most forceful critics of Israel’s occupation of Palestinian territory captured in the Six-Day War of 1967.

In recent years, Oz spoke out against the policies of Prime Minister Benjamin Netanyahu, shunning official Israeli functions abroad in protest at what he has called the “growing extremism” of his government.

Netanyahu, currently visiting Brazil, paid brief tribute to Oz on Friday, calling him “one of our literary giants”.

“We will always remember his contribution to Hebrew literature and the Hebrew language,” he said. KM