Postcards from Seoul: Retracing the footsteps of BTS | Inquirer Lifestyle 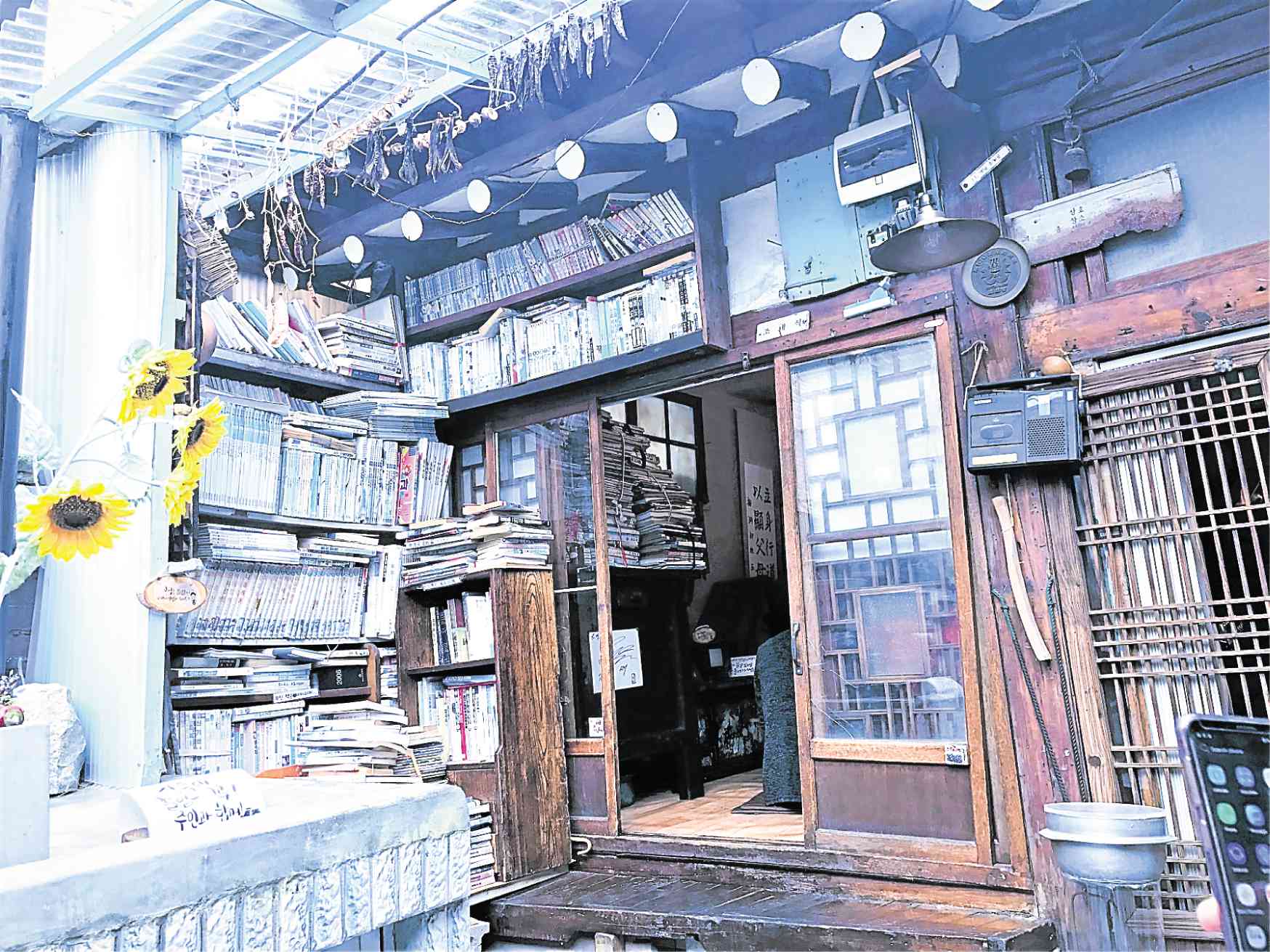 Postcards from Seoul: Retracing the footsteps of BTS

Planning on going to Seoul anytime soon? Make sure you include this in your itinerary if you are an Army.

Aimlessly wandering around the picturesque Seochon Village led me to a quaint hanok book cafe, tucked in a quiet corner in one of the oldest neighborhoods of Jongno-gu in northern Seoul.

From outside, the dilapidated building of Daeo Bookstore was easy to miss in an alley of boutiques and neo cafes. But beyond the blue door and weathered shop sign were a precious family history and a municipal heritage left unchanged since 1951.

An elderly couple used to live in its inner yard, where they used to spend hot summer days with their grandchildren.

Daeo, now considered the oldest bookstore in Seoul, was the same shop that RM of BTS visited years ago. His signature, written on white bond paper, was still plastered near the spot where he took a photo. Perhaps this is not a coincidence.

Somewhere in the upscale district of Gangnam, an important part of BTS’ history lies beyond glistening skyscrapers. It was a small, low-key restaurant called Yoojung Sikdang.

The restaurant was taken straight out of a fan’s dream. Its walls and interior are filled with posters of the Korean band, official and fan-made collages and merchandise, meme stickers and even their signatures from their rookie years. BTS fans from all over the world leave keepsakes inside the restaurant.

With meals worth no more than 9,000 won each, it was not hard to imagine how the seven boys who came from a small company became loyal patrons of this restaurant. Yoojung Sikdang’s dolsot (stone pot) bibimbap made with pan-seared black pork was hard to forget.

How to get there: Go to Sinsa station (Line 3), exit 8 then walk straight to Dosan-daero to Nohyeon-ro. Cross to the other side, turn right on the first street then left.

If there’s one thing that Kim Seok-jin taught me, it’s that’s self-love is the most important thing in the world. So when it was time for me to try out his new restaurant, I thought spending 80,000 won (around $80 or P4,000) for taxi and another $80 for a single meal at Ossu Seiromushi would be entirely acceptable.

According to reports, Jin serves as business director of this Japanese restaurant, while his brother, Kim Seok-jung is listed as the owner.

During the night full of bad choices, my spirits were lifted when two huge stacked bamboo steamers (seiro-mushi style) came filled with Grade A beef and vegetables.

Was it worth all the time and money? Needless to say, the overall experience made me sing Jin’s anthemic “Epiphany” at the end of the day.

How to get there: It is right next to Seokchon Lake Park and Lotte World, a short walk from Jamsil Station Exit 10 or Seokchon Exit 2

While I was enjoying my strawberry milk tea from the BT21 Cafe in Itaewon, a group of young Westerners and Koreans huddled at a table behind me and looked like women with a mission.

Soon, deep conversations about chart data, global pop trends and BTS theories ensued. That’s when I knew I was in official Army territory.

The Line Friends flagship store in Itaewon is home to BT21, the official character line created by BTS. The cafe, which offers featured drinks from the BT21 characters, is on the third floor.

How to get there: Walk straight from Itaewon Subway Station exit 3.

It was a literal constellation of stars, only that they were viewed from digital screens and touch sensors.

Actual handprints of Jin, RM, Suga and J-Hope, Jimin, V and Jungkook are displayed on a wall inside the Lotte Star Avenue. The handprints are equipped with sensors that connect to the Star Mirror zone, where their hologram-like images appear.

How to get there: Euljiro-ipgu Station, Subway Line 2, Exits 7 and 8, between Lotte Department Store and Lotte Hotel

A long bus ride from Mapo-gu took me to the famous K-Star Road in Gangnam. Seventeen “gangnamdols” of popular hallyu stars are lined up in this tourist alley. Our mission, of course, was to visit BTS’ doll, which was literally standing at the end of the road.

How to get there: Apgujeong Rodeo Station, exit 2

“People who always have to wander

And the Han River that bears to much han”

In Korean culture, han means “a sadness so deep no tears will come”—and yet hope still abounds.

Coincidentally, it is also the name of South Korea’s major river, the lifeblood of Korean history for over five thousand years.

On a cold winter morning, when the sun was out and shining, the riverside park became my refuge. As I wrote letters by the Han River, I instantly knew why it recognizes no age, class or status—from Korean superstars to ordinary citizens.

I opened my Spotify and “Love Maze” was on cue. Perhaps I needed to get lost in the maze as well as I strolled around Hangang Park.

How to get there:

I spent the remaining hours of my last day in Seoul in a coin singing room in Hongdae, struggling to sing my favorite K-pop songs in Hangul—but singing them anyway, and singing them at the top of my lungs as if no one could hear me.

A 500-won coin would unlock two songs, so I wasted no time singing my favorite BTS xsongs. From intense rap tunes like “Cypher Pt. 3: Killer” and “Tear” to their solo songs like “Awake” and “Euphoria,” Hongdae’s noraebang truly has it all—and I didn’t want to leave.

How to get to Hongdae: Hongik University Station (Seoul Subway Line 2, Gyeongui-Jungang, AREX), Exit 8 or 9.