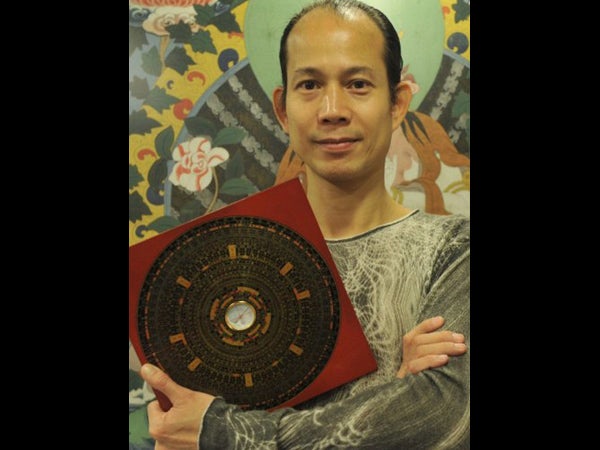 In a picture taken on January 17, feng shui master and TV personality Peter So poses for a picture while holding a Chinese feng shui compass in Hong Kong. China's feng shui masters tackle the big issues with their predictions for the Year of the Dragon. AFP PHOTO/AARON TAM

HONG KONG—Want to know what’s in store for 2012? Who will win the US election? Will the eurozone implode? China’s feng shui masters tackle the big issues with their predictions for the Year of the Dragon.

As Chinese communities around the world prepare to ring in the new year on Monday, astrologers and geomancers are predicting the dragon will bring natural disasters and financial volatility, especially to crisis-hit Europe.

“The world economy will be unstable in the Year of the Dragon, because the economies in Europe and the US are still suffering from the effects of the recession,” Hong Kong feng shui master Anthony Cheng says.

Celebrity astrologer Peter So says the United States will provide some good news late in the year, but his charts for Europe make grim reading.

“Europe will not recover so soon – it is expected to suffer at least until 2014. But what I can say is this, a recovery for the US economy is possible in 2013,” he says.

If you’re prepared to ride the dragon and invest in 2012, Russia and China could be your best bets. The two emerging markets will be the best performers in a volatile year, says Cheng.

But be prepared for surprises, especially out of China where the Communist Party will hold its 18th Congress to select a new generation of leaders.

“In the second half of the year, a scandalous corruption case will be exposed in China,” warns Cheng, refusing to elaborate about who will be implicated.

“I can also predict that in Hong Kong and in mainland China, a number of high-ranking officials will be forced to step down. Some may be thrown behind bars, or even pass away.”

Many Chinese take such predictions seriously and adjust their lives accordingly. Feng shui, the ancient study of the forces of chi, or life energy, is a daily part of life in the Chinese world.

Lest anyone take it seriously, CLSA admits that feng shui’s “original purpose was to locate auspicious burial spots, not call the twists and turns of the equity markets or individual sectors.”

But it has a stab anyway, even if some of its predictions are less than audacious. For example, it says the stars point to a “job opening” for Chinese Vice President Xi Jinping, the man everyone expects to become China’s next ruler after the 18th Congress in October or November.

As for US politics, the soothsayers are more cautious. When asked who will win the US elections, So refuses to make a prediction without precise information about the dates and times of the candidates’ births.

“Sometimes luck depends on the country itself, rather than an individual president,” he says enigmatically.

“For the US, they are starting to have luck on their side again, so it is going to be a good year no matter who’s elected.”

The five Chinese elements are wood, fire, earth, metal and water, and 2012 is tipped to be big on water. This could mean riches and abundance, but it could also spell disaster.

Well-known Hong Kong astrologer Alion Yeo says we should brace for storms and floods. “Expect to see a lot of flooding in areas like Thailand and southeast China,” he says.

So sees similar portents, but with an earthy twist.

“Indonesia, Pakistan, India and places in China like Sichuan, Yunnan and Guizhou are particularly disaster-prone. They are likely to experience frequent earthquakes,” he says.

While the ancient Chinese were developing their systems of astrology and geomancy, people across the Pacific were finding other ways to predict the future.

The Mayans of modern-day South America purportedly had a calendar that showed the world would come to an end on December 21, 2012.

Like the historians who rubbish such interpretations of Mayan belief, So says there is no need to fear the end is nigh.

“Doomsday is just a bunch of make-believe,” he says.