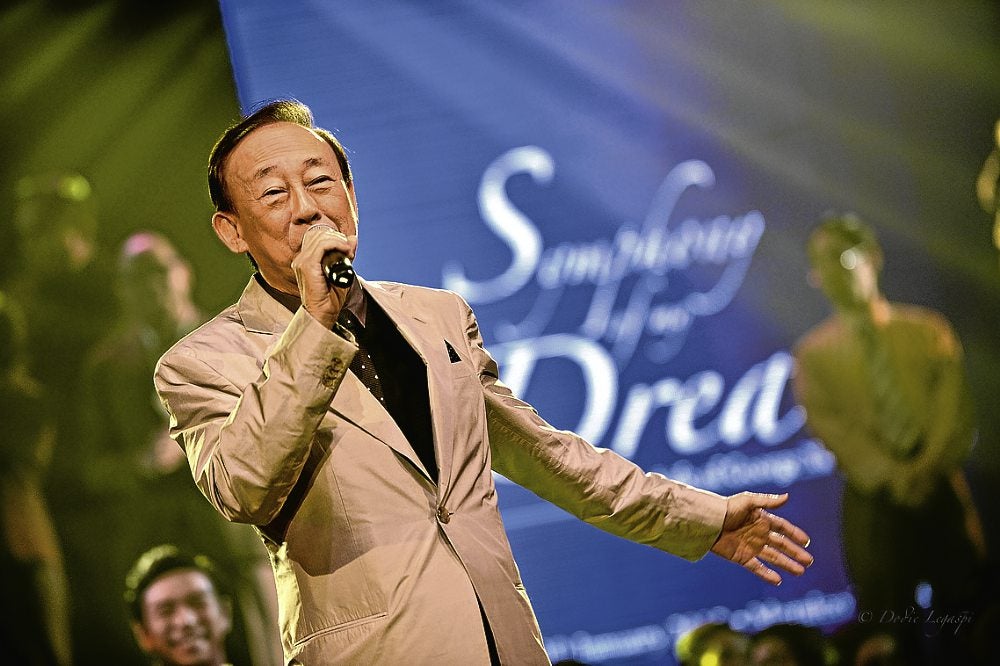 Stirring life of man from McDonald’s now a musical

“Symphony of Dreams” celebrates the life of George T. Yang of McDonald’s Philippines. The musical unfolds three important milestones in the life of the honoree—his business profession, musical odyssey and humanitarian endeavor.

Like some of the bio-musicals held at the Meralco Theater in the past,  people came in droves to watch the big musical event.

George was the toast of the evening. His son Kenneth, president and CEO of McDonald’s, informed the audience the management felt the publication of a book in honor of his father, “The Voice Behind the Arches,” still in progress, would not measure up to the latter’s outstanding achievement. The man revolutionized the fast-food industry in the country three decades ago, and made McDonald’s a part of the national lifestyle.

The young Yang said he and his staff had always been guided by the philosophy of his old man—always to be different. So he said they thought of presenting the musical, music being an inseparable part of the McDonald’s pioneer and senior entrepreneur.

Indeed, it is music that has made much a difference in the career of the elder Yang. He is a dedicated tenor and classical musician.

Vice President Jejomar Binay graced the opening of the musical  and extolled the “genius” of George, whom he called “a determined entrepreneur who dared blaze the trail in the fast-food industry.” The Vice President also described him as a consummate singer who effortlessly shuttled between Sinatra and Puccini.

Undeniably, the honoree embodies love and genius: He shepherded his business to success without let-up, lacing it with music. He has shared part of his well-earned fortune to charity. He set up the Klassikal Music Foundation, which has granted scholarships to many aspiring musicians, totaling 35 to date, to pursue their musical training in various musical schools in the country.

True to the title, the musical is structured like a symphony in four movements, each of which highlights a particular timeline that depicts a thematic development of the honoree. The symphony therefore serves as metaphor depicting the many facets of George’s life: hence, allegro (1948-1962); andante (1964-1974); vivace (1974, 1981-present); rondo 1996-present).

George de Jesus, who is not a stranger to crafting bio-musicals, is the playwright, the lyricist and director.

The 1½-hour musical breezed through without any interruption, unfolding  the milestone of  George’s career with solid dispatch. Vintage photographs were projected as the music unfolded, thus, engaging the audience to enraptured watching.

Reuben Uy played the lead role with Sheila Valderrama as the  loving wife. Carlo Orosa played Jose Mari Chan, whose musical career had made a big influence on   George.

Gab Mariano essayed the role as the young Kenneth. A powerful all-star included some of McDonald’s crew and the Klassikal Music Foundation scholars.

The music, penned by Roy del Valle, unfolded in a straightforward manner. It became the very vehicle to convey the text.

John Neil Ilao Batalla executed the light design and Lex Marcos the scene design. They all made the production grand.

On the last part of the musical, when the real George was fetched from the audience and segued into the song Reuben Uy was dishing out, one spotted the difference. He sang “Let My Spirit Unfold” with a warm conviction, expressively pouring out much integrity to the music with his God-given tenor voice: silky, focused, mellow and brilliant.

In his response, George  jokingly said  he was a “better” singer despite his age, and humbly said he was not a “taipan” but a pantay, which the audience greeted with a hearty applause.

He thanked the audience, whom he referred to as friends, for attending the concert, and acknowledged some of them in the audience, namely Vice President Binay, Ambassador Alfonso Yuchengco, Andrew Tan, Manila Mayor Alfredo Lim and former Chief Justice Artemio Panganiban.

The entire cast capped the performance with Jimmy Antiporda’s upbeat song “A Gift for Always,” which all the more made the musical an unforgettable milestone.