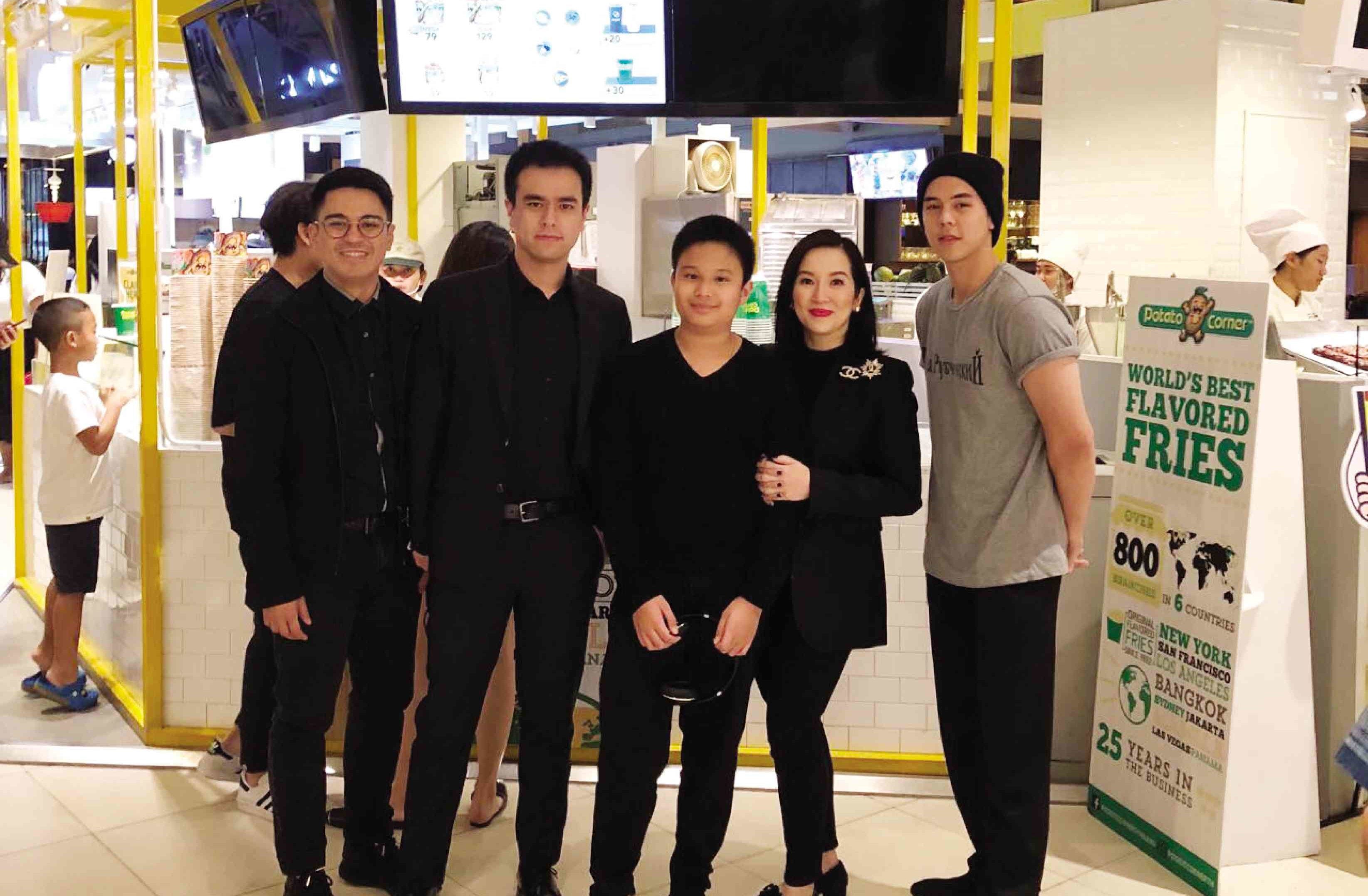 On a visit to Thailand in 2017, Kris Aquino with, from left, Nicko Falcis, Chayapatra Thongcharoen, Bimby Yap and Peach Chirathivat

Here’s the answer to the P40-million question in the ongoing saga that is Kris Aquino’s legal dust-up with her former business manager, Nicko Falcis.

A source from Aquino’s firm revealed the exclusive information to Lifestyle that the Thai partners of the firm, where the P40-million had been invested, affirmed that Aquino is the rightful owner of the investment.

Eloi Sy, one of Aquino’s lawyers, confirmed Lifestyle’s source’s statement that Aquino’s money had been invested by Falcis in Rocks PC Co., Ltd. (Potato Corner Thailand), which accounts for 10 percent shares in that company.

The source also said that the Thai partners, including actor Pachara “Peach” Chirathivat of the prominent Chirathivat clan of Thailand, have reaffirmed Aquino, through a text message last October, as the “beneficial owner” of the P40-million investment, which was under Falcis’ name. Falcis was Aquino’s trustee.

A trustee has no legal claim to the amount in question, Sy said.

Aquino’s Thai business partners, the source said, informed her that after a meeting with Falcis, they have “agreed and established” that Aquino is the rightful owner of the “P40 million plus the shares in Mang Inasal” and the 10 percent Falcis assigned in Potato Corner Thailand.

Falcis, according to Sy, is also a partner in the Thai venture.

“While the shares are in Nicko’s name as your trustee to protect your privacy, it is in our corporate records that you are indeed the beneficial owner of the said shares,” the source quotes Aquino’s Thai partners. “You still have the right to vote and also the right to dividends that may arise in your 10 percent in Rocks PC Co. Ltd.”

Aquino is suing Falcis for qualified theft, for allegedly charging P1.2 million in a credit card intended for expenses in her production company, Kristina C. Aquino Productions, for his personal needs.

The P40-million investment is a separate issue, according to Sy.

“The P40 million was unaccounted for, and we’re trying to account for all the money our client entrusted to Nicko Falcis,” Sy said.

“We had a meeting with Nicko’s sister and his lawyer in September, with the understanding that we were to have another meeting where they would give us the full financial report. They didn’t talk to us again. Instead, they’ve been maligning our client.”

Nothing also has come out of the initial talks on Potato Corner Philippines’ offer for Aquino to buy them out in their Potato Corner + Nacho Bimby partnership, Sy said.

“I asked for an accounting of [the] P40M invested for my sons, and financial reports for our 12 Potato Corner + Nacho Bimby branches and my lawyers and I were ignored,” Aquino wrote on Instagram.

“When Ms Aquino gave Nicko that amount to invest, there was no contract, she didn’t make him sign for it. It was only because she trusted him,” Sy said. “This is so crucial for Ms Aquino because the money came from her sons’ trust fund.”

This past week, Falcis’ camp responded to Aquino’s alleged “bullying tactics,” with his legal counsel, Ponferrada Ty Law Offices, releasing a statement denying claims that they are engaged in “delaying tactics.”

The statement said that Falcis’ counsel filed an “Omnibus Motion to dismiss the cases for forum-shopping, for consolidation of the cases before the Department of Justice, or for suspension of the criminal cases.”