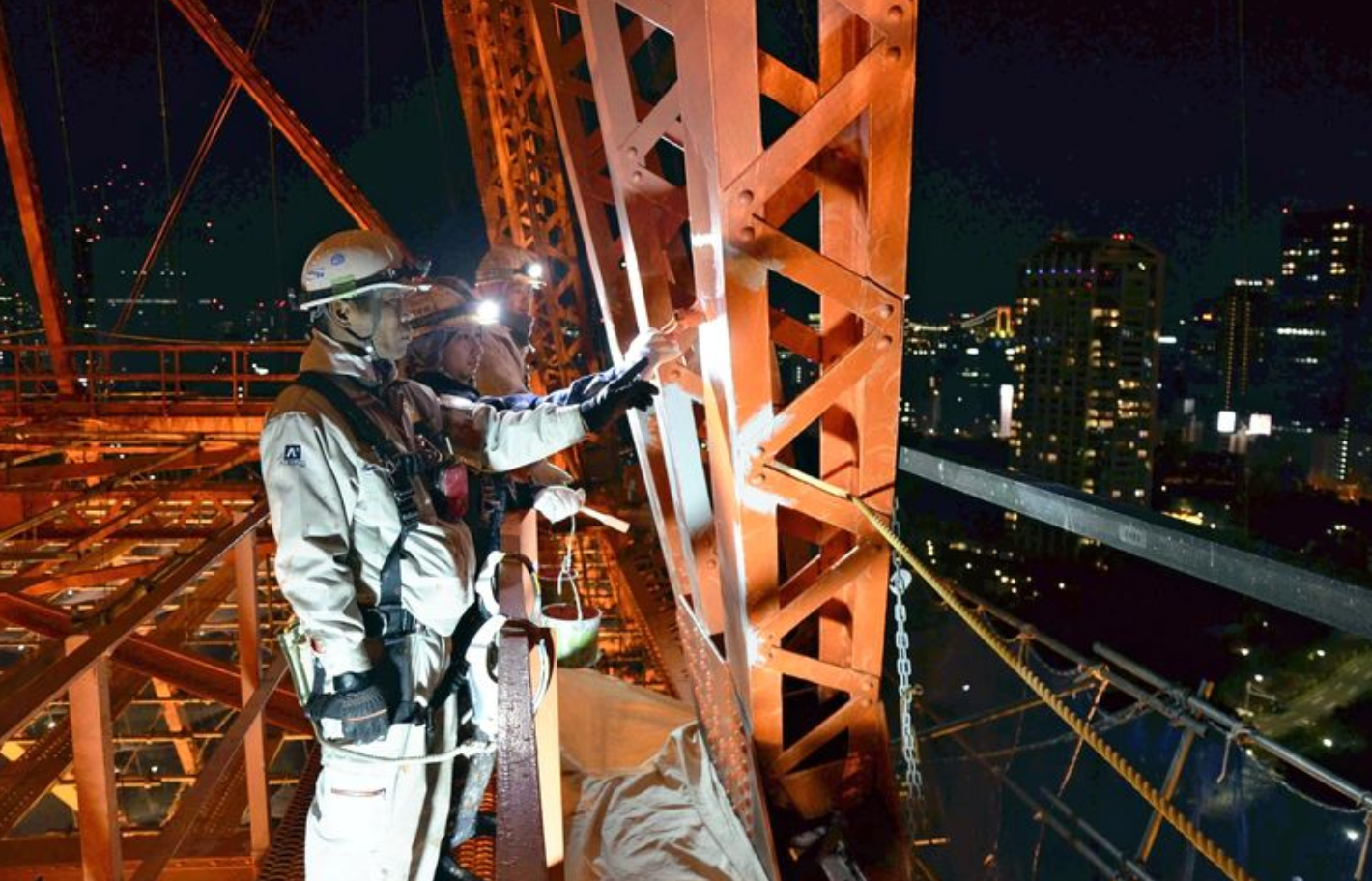 Atsushi Hiraiwa, front, supervisor of the repainting work, joins his crew on the tower late at night in December. The Japan News/Asia News Network

TOKYO — Tokyo Tower marked its 60th anniversary in December. Although times have changed since its opening in 1958 — during the postwar reconstruction era — the tower remains a beloved symbol of Tokyo even today. This is a story about the passions of people involved in supporting the tower’s attractiveness.

At 11 p.m. after the day’s operations had ended and no visitors remained, men wearing helmets and work clothes began repainting Tokyo Tower. The repainting work, carried out every five years, most recently started in July 2018.

Paint cannot be sprayed on as it may be blown away by the wind. The workers used brushes about 5 centimeters wide while painting high up on the tower to prevent drops of paint from falling to the ground.

A total of 94,000 square meters needs to be painted. Even a crew of 30 workers can paint only about 400 square meters each night. It takes a year to complete the mission.

Looking up at Tokyo Tower, Atsushi Hiraiwa, 48, the on-site leader of the repainting work, says he feels overwhelmed by the huge size of the structure, wondering if he can possibly finish the task. Yet, he continues the repainting work slowly and steadily.

Ota Ward, Tokyo-based Hiraiwa Toso Co., which Hiraiwa works for, has undertaken the repainting of Tokyo Tower since 1970. The employees are proud of the work they have done to maintain the beautiful appearance of the tower for nearly 50 years.

Hiraiwa, who was appointed as leader when the previous repainting work was conducted, feels responsibility and joy.

When he looked up at the tower from the ground after the night’s work was completed around 6 a.m., he saw the repainted sections shining beautifully and looking rejuvenated, renewing his determination to “make the tower look beautiful to everyone.”

The repainting team uses three colors of paint. Gray is applied first, with pink painted over it. The final coat is international orange, a color between red and yellow.

The now iconic sight of the international orange tower warmly illuminated against the night sky was first seen in January 1989. Until that time, only the outlines of the tower could be seen at night, lit by a simple row of lights.

Back in 1987, when lighting designer Motoko Ishii, now 80 years old, was commissioned to light up the tower, some people even derided the structure as “a huge iron scrap.”

Behind such comments was the fact that the tower’s presence was fading because high-rise buildings were being constructed one after another. Ishii undertook the job, thinking: “The tower is a symbol of the postwar reconstruction era. I’ll work on it so people will find it attractive in the evening.”

There were some lighting ideas, including having beams of light coming out from the sides of the tower, or illuminating the tower from ground level with powerful lights.

However, she decided to light up the entire tower with lights that would illuminate the inner space of the structure using the smallest possible lighting equipment, considering electrical capacity and the effect on drivers on expressways.

Although the new lighting was ready in October 1988, its debut was postponed out of respect for the deteriorating physical condition of Emperor Showa. The full-fledged lighting began on Jan. 9, after the Emperor passed away. The beautifully shining tower instantly became a symbol of the beginning of the Heisei era.

The tower saw a sharp increase in the number of visitors and boosted demand for condominiums and office buildings from which the tower could be seen. Its popularity remains strong today.

“People say about the tower not only that it’s ‘beautiful’ but also it’s ‘relaxing’ to see it,” said Ishii. “It makes me happy to know that it gives people a sense of security.”

Tokyo Tower uses two kinds of lamps, adopting Ishii’s idea of letting people feel the change of seasons through lighting. In July, cool-toned metal halide lamps are installed and in October, they are replaced by high-pressure sodium lamps that have a warm glow.

Norio Sakamoto, an employee of electrical engineering firm Kandenko Co. in Minato Ward, Tokyo, has been responsible for changing the lamps for 23 years, and was even rehired for the job after his retirement.

He unscrews and removes the bulbs, each about 15 centimeters wide and 30 centimeters long, and replaces them with new ones. Doing this task on the ground would be relatively simple, with about 10 workers able to replace all 180 bulbs in a day.

However, the actual task is done on the tower, at heights of up to 270 meters above the ground. The workers’ gloves become moist with sweat from the tension of knowing that the bulbs cannot be dropped and the excitement of a task that brings light and joy to many people.

Sakamoto said that he “feels truly relieved” when he returns to the ground after the task. He also said that seeing people take photos of the tower makes him “want to say that it’s me who did it.”