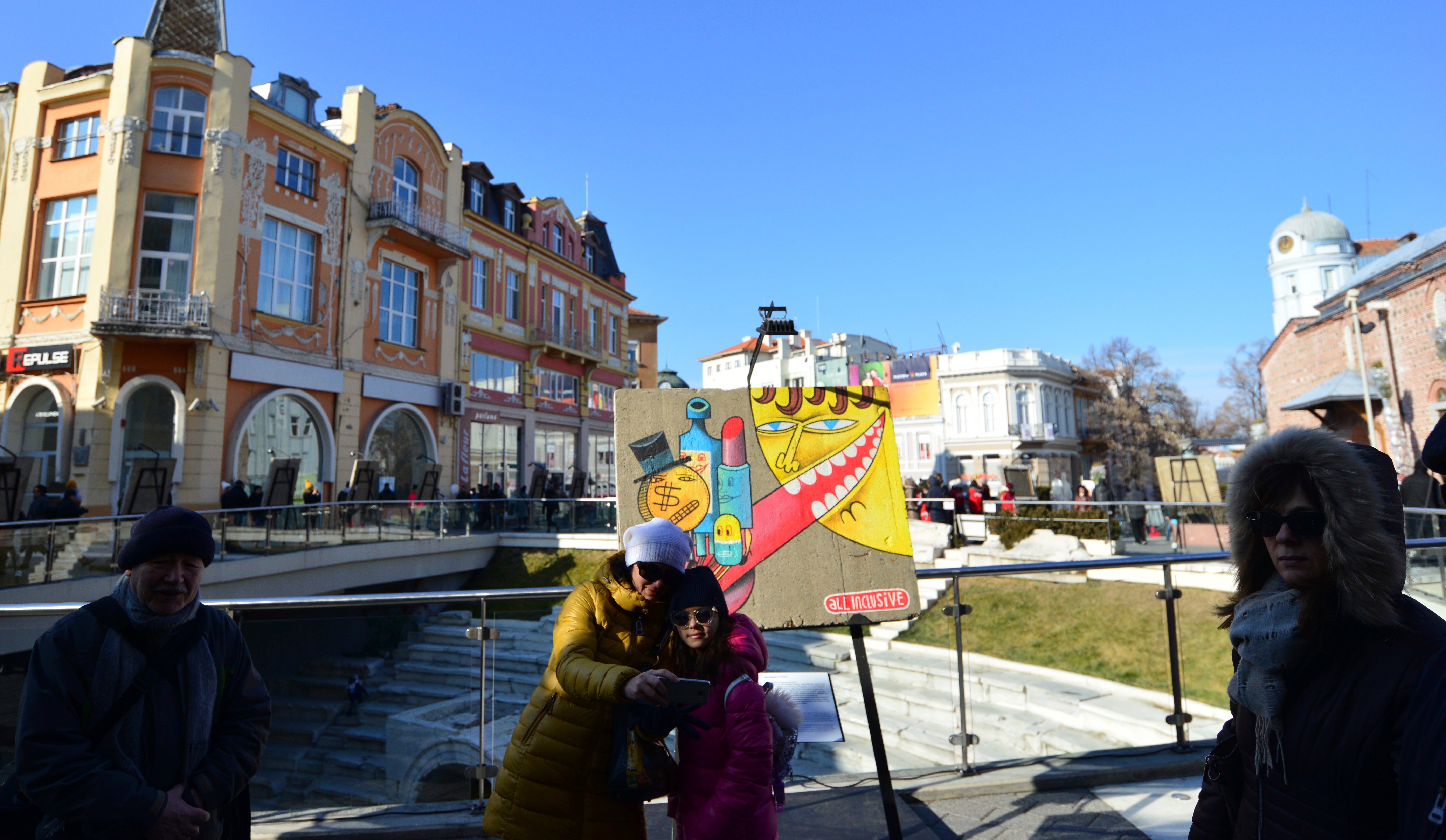 People take pictures at the Art Liberte exhibition, the first travelling exhibition in an occasion of 30 years anniversary of fall of the Berlin wall in the town of Plovdiv, Bulgaria, Saturday, Jan. 12, 2019. Plovdiv is the first Bulgarian town named to celebrate the most prestigious cultural initiative of the European Union, along with the Italian city of Matera as the twin European Capital of Culture for 2019. (AP Photo/STR)

SOFIA, Bulgaria — Plovdiv, the oldest city in Bulgaria, has been officially inaugurated as the European Capital of Culture for 2019.

Some 50,000 people gathered on a main square Saturday to watch the opening show dubbed “We are all colors” with 1,500 local and foreign artists on several stages. The entertainment included traditional Bulgarian folk dancers, 200 choir singers, a brass orchestra and a musical and laser spectacle.

Squeezed between the Balkan and the Rodopi Mountains, Bulgaria’s second-largest city has survived for thousands of years on the crossroads between Western Europe and the Middle East. Plovdiv is in central Bulgaria, 144 kilometers (90 miles) southeast of Sofia, the capital.

Plovdiv claims to be the oldest continually inhabited European city, with more than 6,000 years of history. Evidence of that can be seen in many architectural landmarks dating back to Thracian, Greek, Roman, Byzantine and Ottoman times.

The city on both sides of the Maritsa River is also known for its ethnic diversity. Many of its 340,000 inhabitants belong to the country’s Turkish, Roma, Armenian, Greek and Jewish minorities, all of which have quite a strong influence on the city’s vibrant cultural life.

Examples of this influence were presented during the opening music, light and dance show under the motto “Together.”

Some 350 cultural events are scheduled in Plovdiv this year, including one exhibition featuring fragments of the Berlin Wall to mark 30 years since its fall and another with 30 short films and debates on how art can foster liberty.

Plovdiv, the first Bulgarian city to become a European culture capital, was also named among The New York Times’ list of 52 places to go in 2019. It shares the 2019 culture title with the Italian city of Matera.

“This year will be a turning point for Plovdiv. We have spent four years to prepare all events. I’m sure that Plovdiv will never be the same,” Svetlana Kuyumdzhieva, the art director of Plovdiv 2019, told reporters.