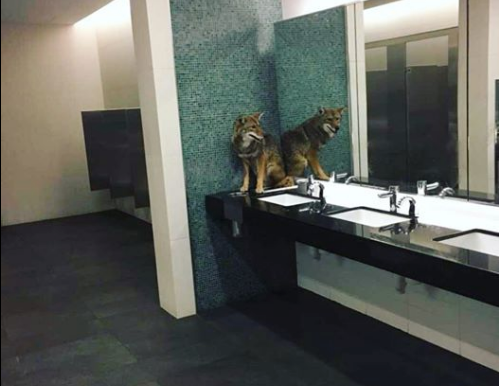 Guests in an event center in Nashville, Tennessee, USA, were certainly in for a surprise when someone spotted a coyote in the area’s comfort room.

The Nashville Music City center shared that the coyote suddenly visited their establishment one night, as seen in the event center’s Facebook post on Tuesday, Jan. 15.

Metropolitan Nashville Police Department Officer Brenna Hosey was one of the officers who responded to the call to remove the coyote from the comfort room.

“So I get on one of the talk around channels and I’m talking to the guys and we’re like do we actually think this is a coyote or is it just a German Shephard or a dog that got loose?” Hosey said in an interview with local media WKRN.

When they arrived at the scene, Hosey said she was convinced that the animal sitting on the comfort room sink was definitely a coyote.

Hosey added that she dispatched animal control to catch the coyote, with the help of two catch poles, one of which the officer held.

When she heard that animal control planned to euthanize the coyote, she offered to put it back into the wild and even had it ride in her patrol car.

“He hadn’t done anything wrong,” she said of the animal. “He’s a wild animal whose habitat is the woods, but Nashville is slowly moving out and some of those woods are being taken away, which isn’t a bad thing but he had nowhere else to go and he ran to where he thought was going to be a safe place.”  Katrina Hallare /ra