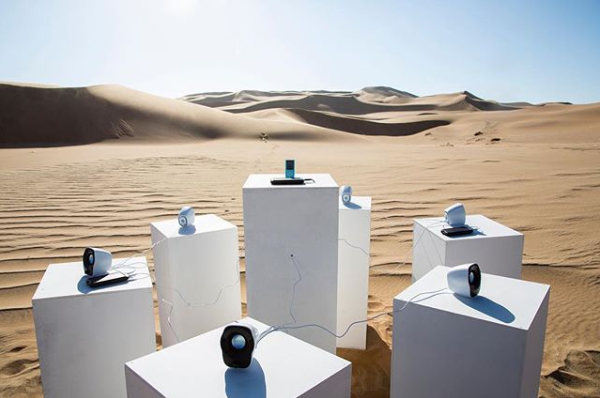 The song “Africa” by Toto could play for eternity in one African desert, and may just be the best—or worst—tribute to the continent.

A 27-year-old Namibian-German artist, Max Siedentopf, put up a sound installation in the Namib Desert in southern Africa, as per his Instagram posts on Jan. 11. The desert is the oldest in Africa at 55 million years old.

Six speakers are attached to a sole MP3 player, which has just one song: “Africa” by Toto. The gadgets set on white pedestals were selected for durability and run on solar-powered batteries, so ideally the song would play for eternity, or at least close to what feels like it.

“I wanted to pay the song the ultimate homage and physically exhibit ‘Africa’ in Africa,” he told BBC, as per a Jan. 14 report.

“Some [Namibians] love it and some say it’s probably the worst sound installation ever. I think that’s a great compliment.”

He also did not reveal where the speakers are located. The desert’s name literally means “vast place”in the native Khoekhoe language. It stretches for over 2,000 kilometers. Gear up for a long road trip if you hope to see and hear the art installation.

The ballad, released in 1982 and which topped the charts at the time, has found a resurgence in popularity in recent years, thanks to social media and a sense of nostalgia.  /ra

Music Nostalgia: 15 Songs that Remind you of your Childhood