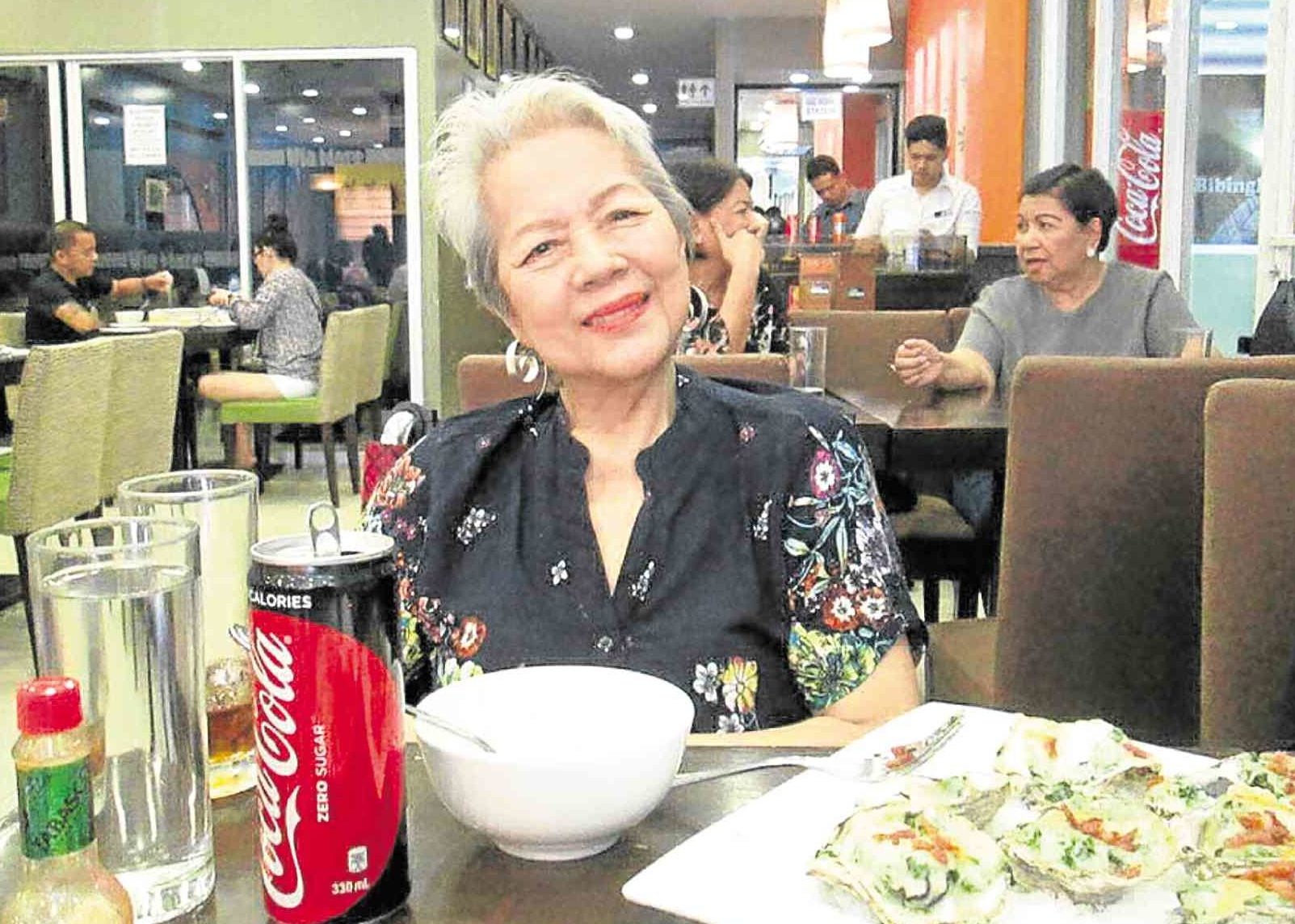 Gilda Cordero Fernando with her preferred drink of distinction and a plateful of Oysters Rockefeller.

Lakwatsa is the colloquial term for gallivanting.—Ed

It was the day after Peculiar People’s Day which is celebrated on Jan. 10, according to illustrator-cartoonist Sandra Boynton. I couldn’t think of a better way to spend the residual of that day than with friend and mentor Gilda Cordero Fernando, the writer who defies categorization because she’s in a class of her own.

I knew that at this stage in her long life, she loved stepping out, even if her legs were unwilling to bring her out of her house. Her will is too strong to acknowledge the weaknesses the flesh is heir to.

So we met in the dark of her boudoir where she was all dressed and made up while seated on her wheelchair.

“Halika na,” she said, as I caught my breath upon arriving. She allowed me to inhale exhale for a few minutes as I told her about a harrowing time spent in the hospital for a thorough breast examination and shared the findings of my doctor regarding my arthritic knees.

Three rings on the bell to summon Michelle, the tall, willowy caregiver who was to push Gilda’s wheelchair and keep her steady while she boarded her car or stepped out of it when we reached Via Mare on Timog Avenue, Quezon City, a few kilometers from her house. There she immediately zeroed in on what she wanted for appetizers.

She pointed her forefinger and tapped it on the menu picture of Oysters Rockefeller. When the waitress said the order would take 20 minutes to prepare since the oysters still had to be baked, Gilda shook her head vigorously but said she’d wait.

Her order arrived at the same time as mine (arroz à la Cubana). She said her household kitchen made a better version of it. I said I missed her cook Veni’s cooking, but according to Michelle, her employer would rather eat out seven days a week.

This meant dressing her up every day, applying makeup on her smooth face (for which she credits Pond’s), putting on her accessories (she wore one of her many pairs of hoop earrings that afternoon) and her sneakers that matched her outfit. Is it any wonder that she has always been the best-dressed writer in my book?

I asked her what she did the day before. She nudged Michelle who, with the other caregiver Aiko, have become her memory bank. Michelle said Gilda went to visit her old friend, Inquirer founding publisher Eugenia D. Apostol, in the latter’s house in Dasmariñas Village, Makati.

Prior appointment had been made so “Tita Eggie” looked forward to the visit, but when Gilda arrived, the former said, “Matalik kong kaibigan si Gilda. Hindi ikaw ’yon.” To which Gilda replied, “Babatukan kita na dyan.”

After lunch, the car made a U-turn to drop me off Popular Bookstore where I bought a copy of Elmer A. Ordoñez’s “Father’s Doppelganger.” Back in the car, Gilda took a cursory look at the book, then handed it back to me.

I asked her if she still enjoyed reading. She nodded, but said she couldn’t remember anything anymore after she finished reading something, whether it’s a newspaper or a book. She circled her hands round the sides of her head. “Magulo na,” she said, seemingly aware of the ravages of time inside of her.

I asked what her friend and neurologist Joven Cuanang said about her condition. She smiled broadly, declaring, “Mahal na mahal niya ako!”

She wasn’t ready to go home. I said I wanted to visit Julie Lluch whose blood pressure had been elevated for the past two days and thus couldn’t visit Gilda as originally planned. So off we went to Julie’s house, but Gilda, being the generous soul that she is, remembered that we needed to stop over a place where we could buy pasalubong for the ailing sculptor.

We drove down Maginhawa Street until I spotted Friulli Trattoria where Michelle and I got off to order Margherita pizza and mozzarella sticks for takeout.

At Julie’s who should be first to say hello to us but her grandson Xoce Luna Dalena and Aba Lluch Dalena who was on her way out on an errand? Aba stopped in her tracks to pull out her cell phone to take a photo (“proof of life,” as Nash Tysmans would call it) of her Tita Gilda and herself.

We didn’t go inside the house as there were steps that the older woman didn’t want to negotiate, so we spent the hour in the carport, with the electric fan turned to full blast. Gilda continued to cuddle and admire chubby Xoce, son of Julie’s daughter Kiri Dalena.

(Note: I can’t believe I’ve gone this far and that particular afternoon isn’t over yet. Trust Gilda to make the day long and memorable.)

When she rolled her head again, Julie and I took it as cue that she wanted to go to another place. Michelle recommended an ukay-ukay emporium (for that was what it was) on Aurora Boulevard near the corner of Anonas Road.

We bid Julie goodbye. The writer and the sculptor exchanged “I love yous” and tight hugs.

I don’t have a picture documentation of Gilda among the racks of ukay-ukay where she almost lost one of her earrings which got caught in a blouse. She found one to her liking—a black top with tiny floral accents. I found a white eyelet dress perfect for lowland summer for P150 and a pair of khaki pants for the same price, all in tiptop condition.

Gilda shouted from her seat her observation of the people who patronized the place, “Very democratic!” And I did notice that all the customers who finished paying up at the counter left the Janco Fashion Trading with a big smile.

I went home also with a smile in my heart for I had spent a full afternoon that stretched to evening with a literary and style icon, whom we are lucky to have very much around us still. —CONTRIBUTED