Above the concrete canopy: Hong Kong from the sky | Inquirer Lifestyle 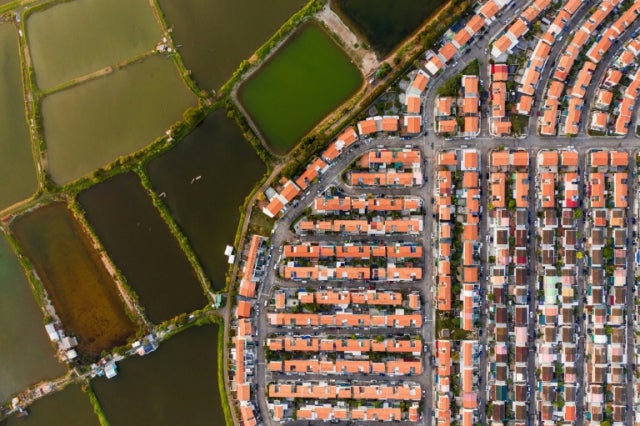 Above the concrete canopy: Hong Kong from the sky

A giant container ship sailing under a suspension bridge; Chinese cemeteries as densely packed as the housing blocks their occupants once lived in; lush rows of paddy fields — aerial shots offer a whole new perspective on Hong Kong.

Internationally it may be best known as a high-octane finance hub filled with skyscrapers, but there is much more to the city — from bustling ports and picture perfect beaches to rolling hills and verdant forests.

AFP photographer Dale de la Rey spent three months training his drone camera lens down on Hong Kong, in a bid to capture the rarely seen sides to the city.

“I wanted to do a package showing the density, uniformity and contrast of the city to give a sense of living in Hong Kong,” he explained.

Hong Kong, which is made up of more than 260 islands, plus the Kowloon peninsula and New Territories which stretch up to mainland China, is now home to more than seven million people.

There are districts such as Causeway Bay and Quarry Bay on Hong Kong island, and Mong Kok and Yau Ma Tei in Kowloon that seem suffocatingly busy.

Even the cemeteries are densely packed.

Usually nestled on steep slopes, they are chosen for their auspicious locations and boast row upon row of rectangular shrines or columbariums — small niches to place remains.

Visiting and cleaning the graves of ancestors is hugely important in Chinese culture with competition for the limited spots intense. Space in private columbariums can go for as much as HK$1 million ($130,000).

Yet within easy reach of the dense urban bustle are a plethora of hiking trails and protected parkland, where it is possible to walk for hours without seeing many others.

The city’s dockyards are the fifth busiest in the world — a far cry from the 1990s heyday — but still a cornerstone of the economy and so popular with the Instagram generation that it is now possible to tour them.

He added: “The city looks great at night and I spent a lot of time looking at Google Maps… so when I found a place to launch I had the shot in mind.” CC