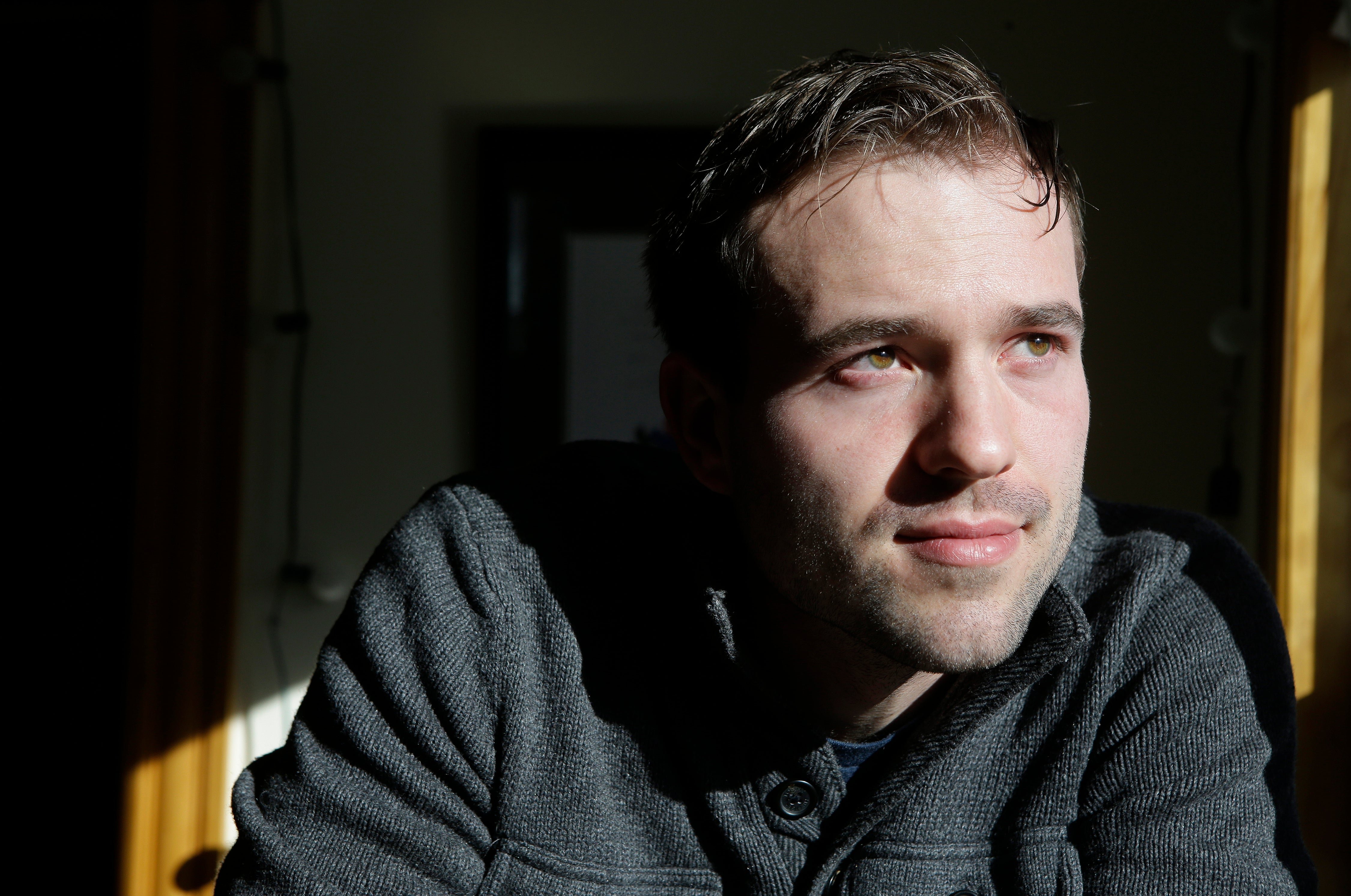 In this Tuesday, Jan. 15, 2019 photo Charles Skold, of Somerville, Mass., son of poet Walter Skold, sits for a photograph at his home in Somerville. Walter Skold, the late founder of the Dead Poets Society of America can be inducted to the society of fallen bards now that he's a published poet. Skold visited the gravesites of more than 600 poets and one of his criteria was that the subjects had to be published. Now, thanks to two of his children, Charles and his brother Simon, he's becoming a published poet, posthumously, with his poetry book: "The Mirror is not Cracked." Image: AP/Steven Senne

PORTLAND, Maine (AP) — The late founder of the Dead Poets Society of America can be inducted to the society of fallen bards now that he’s now a published poet.

Walter Skold visited the gravesites of more than 600 poets, and one of his criteria was that the subjects had to be published. Now he’s becoming a published poet, posthumously, on the one-year anniversary of his death Sunday, thanks to the efforts of two of his children.

Simon and Charles Skold curated their father’s poems for the book “The Mirror is Not Cracked”.

They self-published the tome to ensure it would be printed by Jan. 20, a year to the day their father went from being a chronicler of poets to becoming a dead poet himself.

“We feel like we owe it to him,” said Simon Skold, who once spent six weeks with his dad on one of his cross-country visits to poets’ graves in 2014.

Their father was a colorful character.

He launched the Dead Poets Society in 2008 in Freeport, Maine, drawing inspiration for the name from the 1989 Robin Williams movie. And he traveled the country in months-long, epic graveyard adventures in a colorful cargo van dubbed “Dedgar the Poemobile”.

His cemetery antics combined history, humor and the macabre, but his goal was to draw attention to poetry and poets, especially those in danger of being forgotten.

His death in Pennsylvania came a little more than a month after he commissioned Michael Updike, son of novelist John Updike, to create his tombstone.

In life, Skold marked occasions like birthdays and holidays with a poem. But he never published his works. Under the surface, his sons say, he was plagued by self-doubt and prone to periods of depression. He kept the bulk of his poetry to himself.

His sons realized after his death that he’d amassed about 300 poems. Reading the poetry allowed them to see the world through their father’s eyes.

The brothers shared laughter and tears as they perused them last summer. Some were handwritten, others stored on computer drives. They ranged from full-length works to one-line quips, like this one from 2017: “I hope I’m alive when I die.”

They found that remembrance, lament and hope pervaded his poetry, which they described as a dance between sorrow and joy. “The gift of life and the reality of death here meet and walk in hand, a marriage of sobriety and reverie,” they wrote in the foreword.

The poetry is actually quite good.

“I was afraid it would be a sentimental gesture, but it rose way above that mark. It’s a very solid book,” said Michele Madigan Somerville, a poet and writer who got a sneak peek at the poetry. “I was surprised to see how good the book was.”

Already, the sons are thinking of publishing a second book based on a project their dad had worked on, but was never published.

For now, they’re happy with a small run of their book. They worked with Maine-based Ascensius Press on a print run that numbers in the hundreds, not thousands.

While alive, Walter Skold hatched the idea of creating a new holiday, National Poets Remembrance Day, on the Sunday closest to Oct. 7, the date Edgar Allan Poe died. He viewed it as a day to celebrate all poets, including those who have died.

Now the tables are being turned on the late poet.

Charles Skold, who lives in Massachusetts, said he and Simon, from Nevada, plan to return to his father’s grave in Brunswick, Maine, to read his poetry on the holiday. CC

The ‘Dead Poets’ grow up