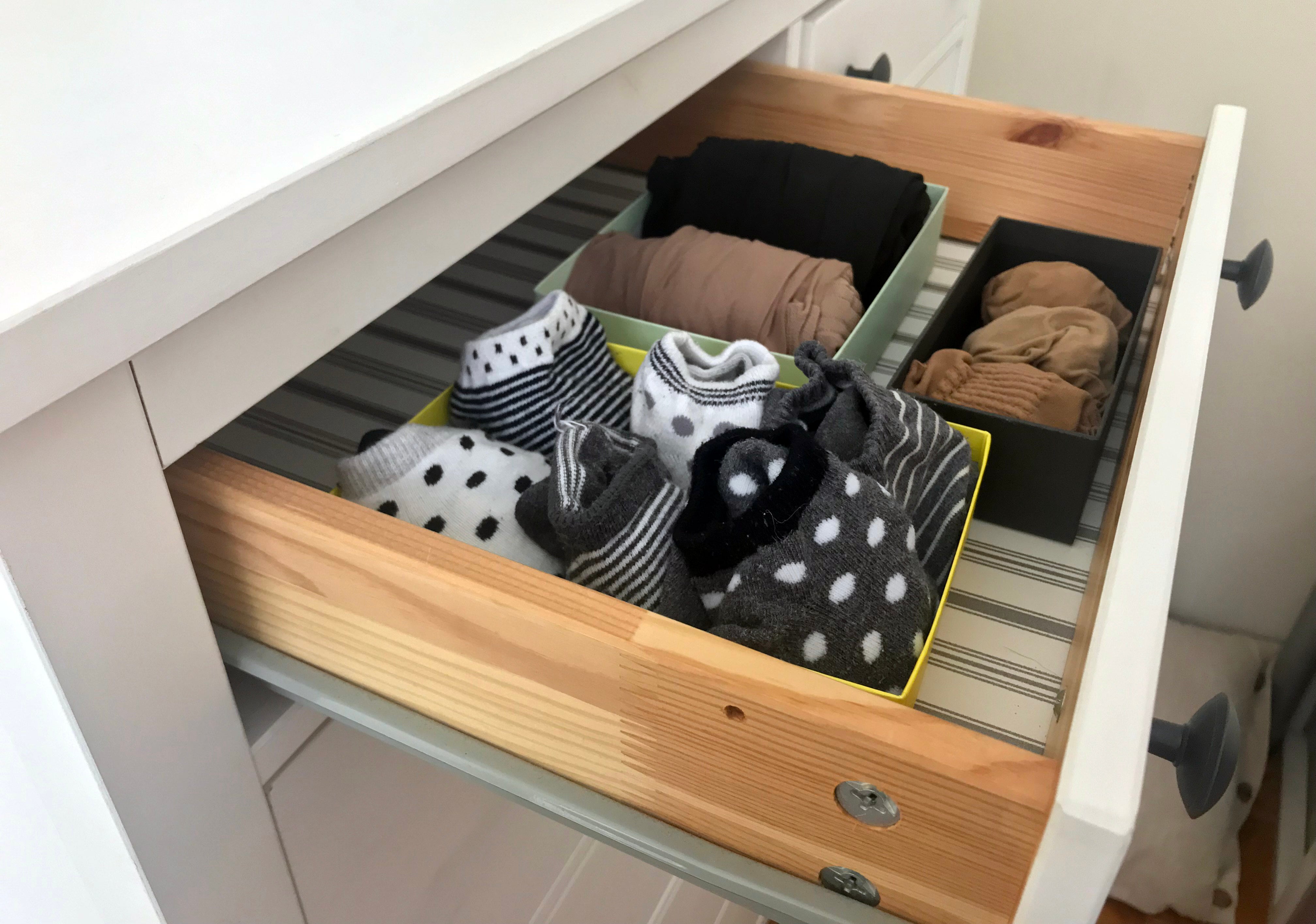 Socks and tights are seen arranged in a drawer in small boxes at a home in Washington, DC, as recommended by Japanese tidying expert Marie Kondo, creator of the "KonMari" method, on January 18, 2019. - Marie Kondo is small of stature, but her tidying philosophy has reached stratospheric heights. Her book, "The Life Changing Magic of Tidying Up," has earned a cult following since its publication in the US in 2014 -- but it is the 34-year-old's new Netflix show, "Tidying up with Marie Kondo" that has everyone talking. (Photo by Caitlin WILSON / AFP)

WASHINGTON – After experiencing homelessness in 2011, Sarah Eby found herself constantly collecting things so she would never again feel she had nothing to call her own.

“When I moved into my apartment, it just felt empty,” the mother-of-one from Arvada, Colorado told AFP. “I got everything I could to try and make it feel like I had a home.”

But as Eby moved house over the years, the clutter built up. Now, inspired by the Japanese home organizing guru Marie Kondo, the 27-year-old said she has banished the chaos for good.

And she’s hardly the only one.

Kondo is small in stature, but her tidying philosophy has reached stratospheric heights.

Her book, “The Life Changing Magic of Tidying Up,” has earned a cult following since its publication in the United States in 2014, with millions adopting her suggestions for a neater, happier existence.

But it is the 34-year-old’s new Netflix show, “Tidying up with Marie Kondo” – released on New Year’s Day, when everyone is keen to reinvent themselves and motivated by their resolutions – that has everyone talking.

“I love mess,” Kondo proclaims in the show, which sees her visit American homes – flanked by her interpreter – to implement her trademarked “KonMari” method.

The idea is simple: gather your things one Kondo-defined category at a time and go through them one by one, keeping only those that “spark joy,” and giving them a place in your home.

As for the rest, a KonMari convert thanks his or her used items and tags them for donation or the garbage pail.

At the end, most converts find they have far fewer possessions, and a happier outlook.

“I think it plays an integral role with my relationship to things,” said Eby, who watched one episode of the show before diving into the book.

“I was never messy or unclean or untidy – I just had too many things. And so the part that I connected with most would be the letting go of the things that don’t bring me joy.”

Almost overnight, Kondo has emerged as a cultural icon – she is the subject of countless viral tweets and memes, and a flurry of think pieces unpacking the show in surprising, somewhat disconcerting depth.

Her method, however, is not without controversy: advice to donate old books has infuriated bibliophiles on social media.

But for Den Kovacs, a video games journalist and KonMari disciple, Kondo – with her gentle, judgment-free encouragement – is a welcome antidote to harsh reality TV, not to mention American chaos.

“People really do feel … chaotic, they feel overwhelmed,” said the 23-year-old from Livonia, Michigan. “So when they see someone who comes in, and she’s like, ‘I can fix this! We got this!’ … people are like ‘Yes, I need this in my life.'”

Social media users have already reported a “Kondo effect” at local thrift stores, with more goods pouring in for resale – although a national spokesperson for Goodwill told AFP it is “too soon to tell.”

And as viral trends go, KonMari-mania is one that could actually be good for people: according to a 2016 study, too much clutter can be bad news for wellbeing.

Kondo’s fans are earnestly reporting the benefits of going clutter-free.

“It feels really good,” said Kovacs, who explored other tidying approaches, but found KonMari to be the most effective. “I really de-cluttered my mind. It felt like I had less stress, less to focus on … I could focus on myself.”

Meanwhile, for Olguyne Fernandez-Fraga, a 27-year-old nutritionist from Miami, Kondo has boosted her social life.

“Before it would be like ‘Oh, can we invite so and so over?’, and it was like ‘No, look at the house’,” Fernandez-Fraga explained. “Whereas now, it’s like yeah, they could come in the next 10 minutes if they want to.”

And in the digital age, it turns out even email inboxes and social media friends can be “KonMaried.”

“I just went down the (Facebook) list and asked myself, ‘Does this person spark joy?'” Kovacs explained.

“As soon as you start to ask that about someone, you suddenly realize the people that add value to you,” he said. “You certainly appreciate them a lot more than you did before.” /kga