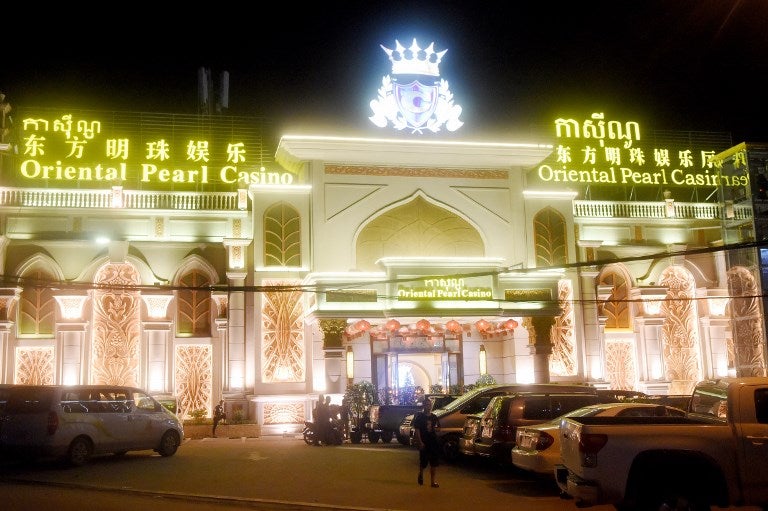 This photo taken on December 13, 2018 shows one of the many Chinese casino establishments in Sihanoukville, the coastal capital of Preah Sihanouk province. - Cambodia's love affair with its communist neighbour has meant big bucks for the once-impoverished Southeast Asian country, injecting billions into its economy without questions about its abysmal rights record. And China's largesse is none more apparent than in Sihanoukville, the nexus of China's "One Belt, One Road" infrastructure plan which includes a planned highway to Phnom Penh. (Photo by TANG CHHIN Sothy / AFP) / To go with Cambodia-China-development-politics, FEATURE by Sophie DEVILLER and Suy SE

SIHANOUKVILLE, Cambodia — A businessman leaves a smoky room $1,500 poorer from a game of Baccarat at a casino in Sihanoukville — an increasingly common scene in the Cambodian beachtown as it becomes a honeypot for Chinese gamblers and investors at a pace worrying marginalized locals.

“It’s not so bad if I lost tonight,” said Dong Qiang, adding: “I will try my luck tomorrow.”

The coastal capital of Preah Sihanouk province — named after Cambodia’s revered late king — was once a sleepy fishing community before being claimed first by Western backpackers, and then wealthy Russians.

Today it is Chinese investment that is transforming the province — into a sizeable gambling playground for mainland tourists.

“Some gamblers lose hundreds of dollars in less than 20 minutes,” an employee from a casino told AFP, requesting anonymity.

Casinos are banned in China, although the enclave of Macau — often dubbed the “Las Vegas of Asia” — has special laws allowing a massive gambling trade.

But Sihanoukville is becoming a popular alternative. There are around 50 Chinese-owned casinos and dozens of hotel complexes under construction.

Around 30 percent of Sihanoukville’s population are now Chinese, according to the provincial governor, who said this number ballooned in the past two years.

At the Oriental Pearl Casino, business is brisk. Ten Chinese men sit silently while their cards are shuffled across the green felt table, chain-smoking under the neon glare from a nearby bank of “50 Dragons” slot machines.

But while millions of dollars change hands on the casino floors, insiders say the big money is made in “secret rooms” hosting online gambling sites.

Cambodia’s love affair with its communist neighbor has meant a sizeable cash injection for the once-impoverished Southeast Asian country. Billions have flowed into its economy but with few questions asked about China’s abysmal rights record.

Preah Sihanouk’s governor said $1 billion has been invested by Chinese government and private businesses between 2016 and 2018.

And China’s largesse is none more apparent than in Sihanoukville, a nexus of Beijing’s “One Belt, One Road” infrastructure plan, which includes a planned highway to Cambodia’s capital Phnom Penh.

China has also sought high-profile military exchanges, fuelling speculation that it wants to build a naval base off the Cambodian coast in Koh Kong province, north of Sihanoukville, with ready access to the flashpoint South China Sea.

He also returned from a recent trip to Beijing with the promise of $588 million in aid and an increase in bilateral trade to $10 billion by 2023.

Real estate prices in the town have skyrocketed in the past two years, increasing from $500 per square meter to five times that for homes close to the sea, real estate firm CBRE told AFP.

The provincial governor describes Chinese money as “a diamond and golden chance for all”.

“They bring money to invest because they see our potential,” Yun Min said.

Yet swathes of new development make it harder to settle old disputes over ownership in a kingdom where land has been commandeered by prominent, government-connected tycoons and wealth and influence trump the rule of law.

“The huge Chinese investment in Preah Sihanouk province has no benefits for the poor,” said Sun Sophat, a representative of the Spean Chheah community, which has camped out on a roadside refusing to be moved from lands they say have been sold from under them by a local tycoon.

“The benefits go only to the wealthy and the powerful.”

Boeun Kang, who has lived on the road next to the disputed land for 11 years, said her desire is simple — to own a 20×30 meter plot of land, which she is willing to die for.

“We don’t know when they will take this land, but we are all ready,” she told AFP. “We are ready to die here.”

Some local shops and restaurants grumble that they have been forced to close while Chinese-owned ones now stud prime spots, and NGOs say large hotels and resorts pump out uncontrollable amounts of sewage and rubbish.

Governor Yun Min said on balance things have improved for locals thanks to the Chinese imprint.

But he conceded that the money, casinos and a surging population had also brought trouble.

The Interior Ministry last year assigned a taskforce to handle the influx of people and a rise in some crimes — such as kidnappings, extortion and prostitution.

“The situation is under control,” said Yun Min.

He added: “These (problems) exist but after we are done with (the development), it will be clean and we will get a lot more benefits from it.”