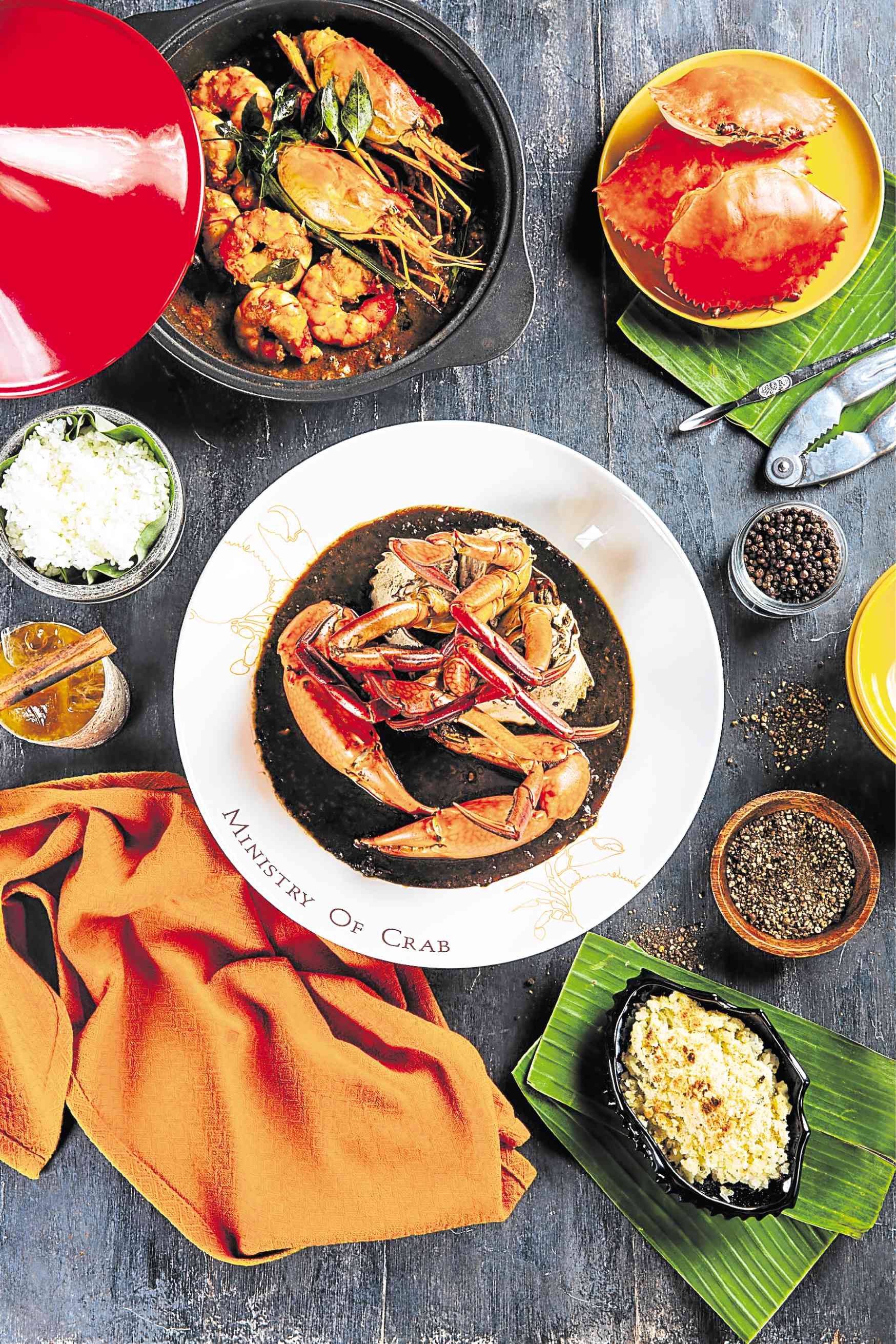 Crabs are sold by size at Ministry of Crab.

The ministers of crab are Dharshan Munidasa, Kumar Sangakkara and Mahela Jayawardene, and they run the Ministry of Crab out of Colombo, Sri Lanka. If, like me, you know nothing about Sri Lanka’s food and culture, but don’t think you’ll have a chance to visit the island nation in the near future, fret not: Sri Lanka is coming to you, as the Ministers have set up an outpost (in our parlance, “satellite office”) at Shangri-La at the Fort.

It occupies a piece of prime real estate that we were informed was supposed to be the hotel’s nightclub. I thought that the place was equally suited to a beautiful flagship restaurant —it’s actually an even more majestic space than the one that the hotel is using for their own steakhouse Raging Bull, which feels a little tight and squished, especially when you’ve put a few steaks inside of you.

The Ministry of Crab, in contrast, feels like walking into another world: the tables are well-spaced, the lighting and acoustics are some of the best of any restaurant I’ve visited here or abroad, and there’s a fastidious attention to detail that makes you believe—and this is how any good restaurant should make you feel—that the meal that is about to unfold is the most important event that you are about to experience.

The dining room is dominated by a large board with the name of the restaurant, and below is a row of crabs in silhouette, from small to Crabzilla. As we began our drinks, all of the bulbs were lit, but by the time we got around to ordering, two of the sizes had the light behind them turned off: this meant, we were told, that that particular size of crab was no longer available. Panic! We had no idea that there was a competitive aspect to ordering, like playing bingo. As we watched, another bulb went out. Someone had ordered the OMG!, which was the next-biggest size after the Crabzilla. Just to give you a sense of the prices, anything above Colossal was above the P10,000 mark.

We prudently decided to go small, and ordered the smallest and second-smallest crab sizes available. The crabs, after all, are Philippine crabs—and we have our own sources for experiences with WTF!-sized crabs at more basic prices.

Apart from the whole Ministry of Crab franchise experience, we were here for the sauces. The most famous is the black pepper sauce with pepper imported from Sri Lanka, while the local favorites are the soy butter and the chili garlic. We also ordered kade bread, Sri Lankan wood-fired bread, to sop up the sauce, and pol sambol, a kind of coconut-based relish that is “hand-scraped before being ground.” We also ordered small dishes of clams and prawns, all in different sauces, so that we could try the whole range of flavors.

Secret in the sauce

Almost all the sauces were transcendent: the chili garlic was probably the best, with the soy butter coming a close second. The black pepper sauce was an entirely new flavor, definitely not anything familiar to our tastebuds.

We were a little mystified that the “wood-fired kade bread” tasted like ordinary white loaves from Bread Talk but the pol sambol was a revelation. Despite its name, it shares very little with what we know as sambal from a bottle. More of a relish than a sauce, it’s full of complex, multilayered flavors, rather like a good palapa. The perfect bite is a big chunk of crab with rice sodden with butter and crab fat, and a chaser of the grated coconut from the sambol.

The Ministry of Crab’s full experience should not be discounted. We all have our favorite crab places, often in seaside shacks where they present you with exuberantly fat and juicy crabs and very little else, so that you find yourself gnawing on crab claws to try and get them open, or bashing them with beer bottles, splattering yourself and each other with sauce in the process.

This does not happen at the Ministry, which is the only convincing attempt I’ve experienced to make crab into a fine-dining experience without de-shelling it for you. They give you natty aprons (not cheap thin plastic ones), an ordinary napkin, a cold rolled-up towel (replaced throughout the meal), and offer you a range of pliers, surgical equipment, chopsticks, utensils, etc. to choose from as your preferred means of liberating the crab meat from the shell (we used all of them).

After the meal they bring you a big bowl of warm tea into which to plunge your hands. That said, there’s no substitute for getting up to go to the washroom to get the oil off—and trust me, you will be very buttery by the end of the meal —with soap and water.

There’s an attempt to indigenize the experience by offering pinakurat crabs and other local flavors. They have things other than crab in case you’re allergic or want something else. But I think this is going in the wrong direction—if you want crabs in local flavors there are plenty of other places to go, even if not as pretty. As for local food, I have no doubt that it’s cooked well, but that’s not what you’re there for.

The Ministry of Crab could serve as the foot in the door to introduce Filipinos to other wonders of Sri Lanka’s culinary tradition, about which we know nothing but would be very willing to be educated. We really don’t need another restaurant selling upmarket versions of local favorites.

We paid about P3,000 per head without alcohol, having tried most of the things we wanted to try.

People will argue that you can get better crabs for less, and this is true. I’ve sat in a restaurant in Dapitan with my feet dangling out in the water and steamed crabs full of roe dipped in nothing but a bit of salted vinegar. More recently, I’ve had the excellent trays of crabs from China Mommy, which are plump, bursting with curry flavor, and will keep you licking your fingers for hours. But this battle is not about crabs; it’s about a crab experience.

The Ministry of Crab made the right choice when they decided to go upmarket when opening their Manila branch (the reports are that it’s a much more plainspoken experience on their home turf).

For the gorgeous interiors, the vast bar, the attentive service  and the exotic sauces, it’s worth it. But to be sustainable as a restaurant it should use the crabs (and it’s Asia’s 50 Best recognition) as the thin edge of the wedge in introducing the world to Sri Lankan cuisine, rather than offering drearily familiar fillers on the bottom half of the menu. The Ministers, as tends to come with the position, have some tough choices to make. –CONTRIBUTED