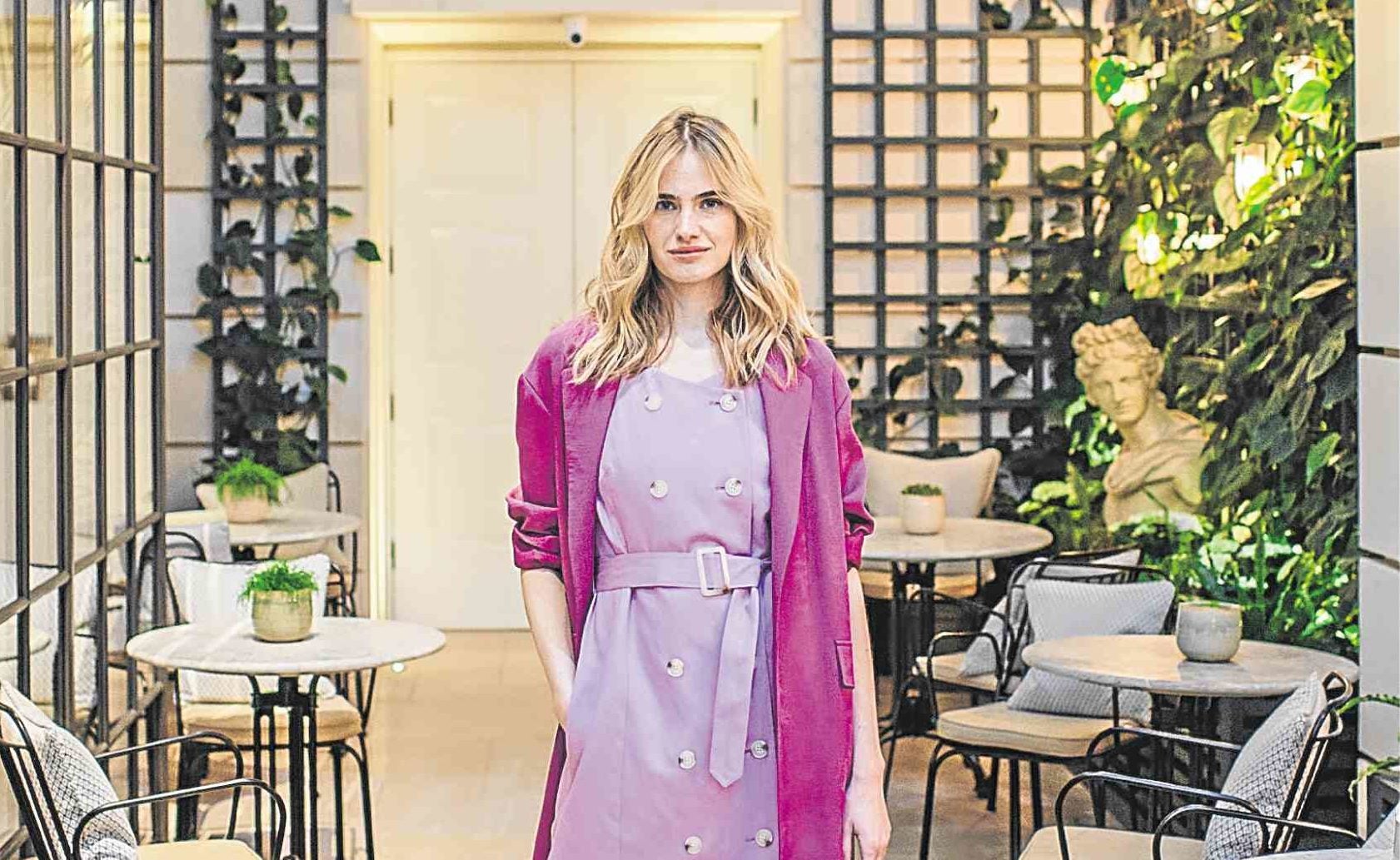 London—New, attractive pricing up to 28 percent lower, a kids’ line, and chic, modern pieces reminiscent of a high-profile duchess are just three of the good reasons to shop at British heritage brand Marks & Spencer (M&S) this season.

While Meghan Markle, the Duchess of Sussex, is often seen wearing luxury brands, she has also been known to add high-street pieces into her wardrobe mix. On the three occasions she was photographed wearing pieces from M&S—a bell-sleeved black pullover, a fascinator and a little black dress—the items quickly sold out in the United Kingdom.

“We’re very pleased when the Duchess of Sussex picks one of our designs. That’s great endorsement, but we don’t really push that, out of respect for the royal family,” said Francesca Zedda, head of styling at M&S, at the brand’s Spring-Summer 2019 press show at One Marylebone here last week.

Nonetheless, it was hard to ignore some of the standout pieces in the M&S Womenswear Spring-Summer 2019 collection that seemed like nods to the current most photographed royal.

For instance, there was a cream-and-black checkered sleeveless dress that’s a dupe of the striped and double-breasted $2,000 Altuzarra dress the duchess wore to an engagement a month before her wedding last year.

The royal’s easy, Southern California style and love of trench coats also seem to have been captured in a cream skirt and blush tee look, paired with a tonal suede-like coat, its sleeves rolled-up à la Meghan.

Given the duchess’ overall popularity, it only seems prudent for a brand to not ignore the so-called “Meghan effect”—whether they own up to it or not.

It’s easy, modern and effortless dressing that’s the overarching theme of M&S for the coming season, according to Niki Haylett, M&S head of international buying for womenswear.

Key shapes are maxis, as well as relaxed and boxy ’80s-like suiting. Fabrics to go for are linens and denims, including soft, fluid Tencel for dresses.

Go for a casual denim dress in a flowing Tencel fabric, Haylett advised. Denim dresses are quite versatile, she added, and can be styled with tan accessories, white trainers, flip-flops or flat sandals with a straw bag.

As an option, M&S has also designed kaftan-style linen dresses with side slits that can be dressed down with trainers for weekends, or dressed up with sandals for work.

This season is a “return to the real woman, to femininity, in a comfortable way,” Zedda said. “We took a considered approach to color, fabrics, prints, and the smart, relaxed and casual dressing that we all need.”

One of Zedda’s top picks is the midi shirtdress, which can be layered with skinny trousers, or worn on its own with white shoes and accessories “for instant sophistication.”

The head stylist also favors the tailored linen shorts suit coordinates, which take their boxy silhouette from the 1980s trend. They come in neutral and earth tones, in solid colors (rust, camel, beige) or with thin stripes.

“They’re double-breasted and echo the ’80s, which is one of the major trends,” she noted. “It has a boy’s feel, but the cut and fabric are very feminine. The blazer can be paired with a T-shirt and denim jeans and it becomes really cool. Add white accessories and it becomes very sophisticated. You can even throw it over a dress, or team with the season’s lilacs and magentas.”

She added, “Shorts were all over the runways. You can wear them with heeled, strappy sandals for work, or if it’s an informal setting, even with white trainers.”

The men’s collection, meanwhile, espouses calm pastel suiting or tonal styling, with pops of prints and stripes for casual dressing. Trousers are narrow and cut at the ankle.

M&S Valentine’s lingerie is comprised of designs in pink, reds, as well as florals for satin sleepwear accented with racing stripes.

Soozie Jenkinson, head of lingerie design, said trends point to wire-free bras with molded cups and no-pad bras that are a 1990s revival. There’s also a continued love for bralettes.

To modernize the animal print trend, M&S adapted the patterns in its lace designs, she added. Blush tones are also on trend.

For knickers, the newest shape is called The Miami, inspired by Jenkinson’s trip to South Florida—it has a high leg cut akin to a bikini, cheekier (pun intended) than your usual panties.

This season, the brand will also launch M&S Body, lingerie of very lightweight and innovative fabrics.

M&S has taken to heart women’s desire for nice sleepwear as part of their overall well-being, according to Jenkinson.

“It’s not just aesthetics. We also consider fabrics that are soft on the skin. We’re using all natural fibers, especially for the summer.” They’ve also elevated the pajama trend by incorporating the side stripes popular in tracksuits, for floral satin sleepwear.

M&S has the biggest market share for lingerie in the United Kingdom, at 36 percent. 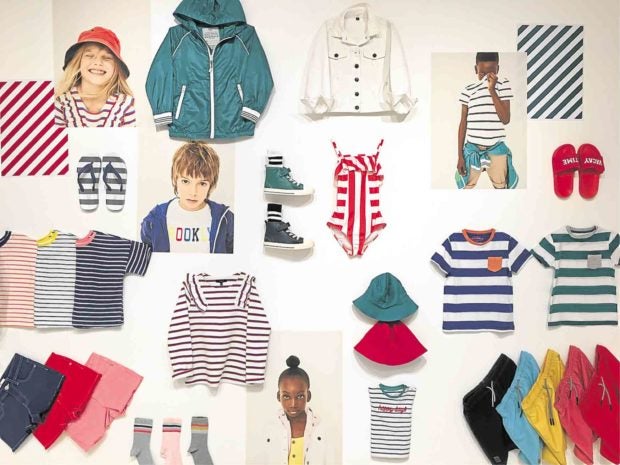 In the Philippines, M&S will debut its Kids line on Feb. 3 in three locations—at Shangri-La Plaza, Greenbelt 5 and a pop-up in Glorietta.

“This season we’ve invested in our prices to make us more competitive,” said Anton T. Huang, SSI Group president, in a statement. “By introducing new prices across all our clothing products, our customers will be able to take a fresh look at our style—with the quality you know, now with lower prices you’ll love.”

Founded in the United Kingdom in 1884, M&S has been in the Philippines since 1997 under Rustan Marketing Specialists Inc., a division of SSI Group.

According to Lucille Tolentino, the brand’s longtime merchandising and marketing manager, M&S customers tend to be loyal to the brand. In fact, of the 100,000 enrolled in the M&S loyalty program, 70 percent are active customers.

Like in the United Kingdom, a growing segment for the M&S market in the Philippines is food, said Tolentino, though womenswear still dominates the pie. Undoubtedly, one of its biggest selling points is the inclusive sizing—up to UK 22 for select pieces.

The new market-right pricing strategy is expected to bolster M&S’ market share, vis-à-vis the competitive pricing of other high-street brands in the Philippines.