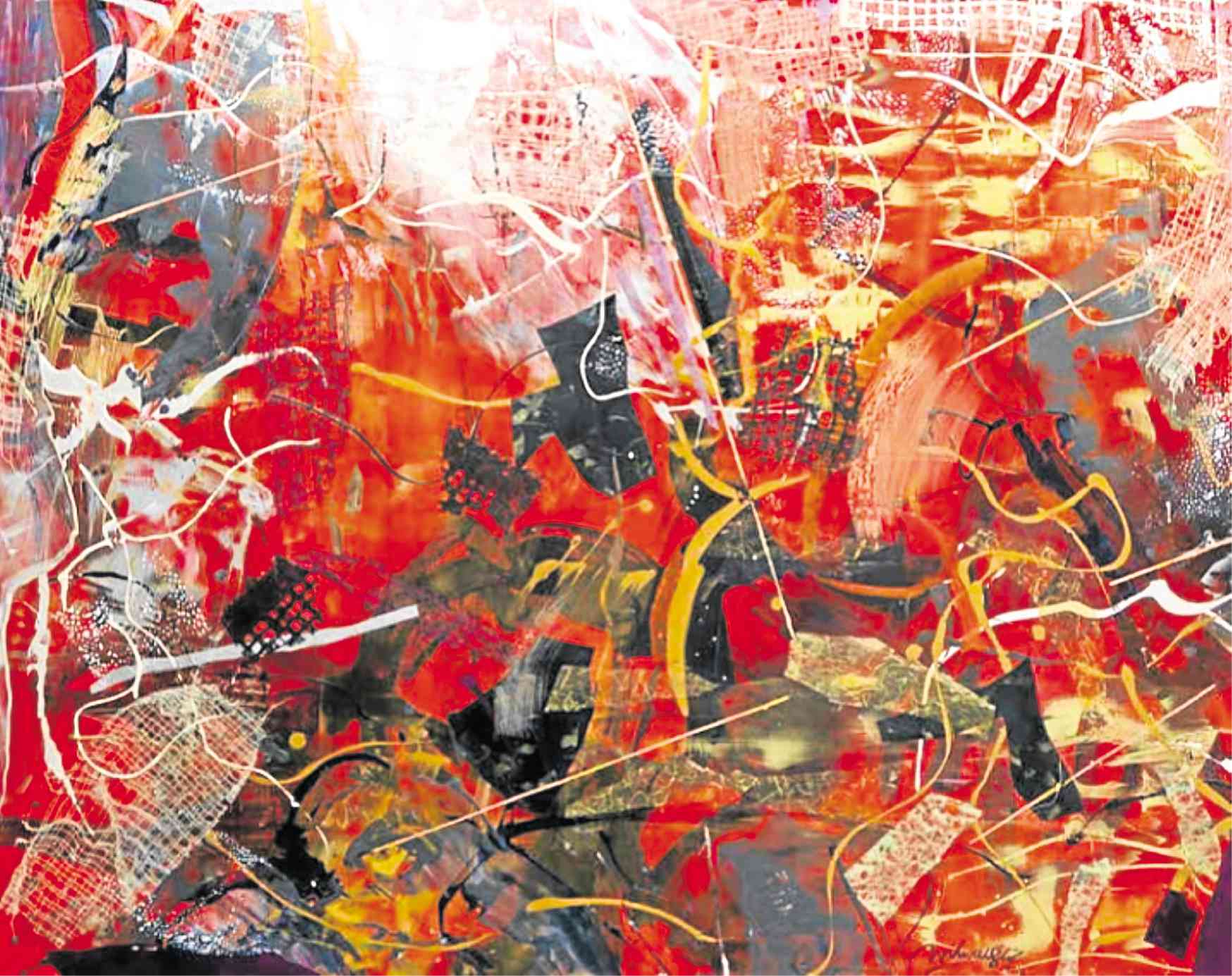 Edwin Wilwayco–conductor with a paintbrush

The late Lee Aguinaldo, one remembers, was a jazz enthusiast, as the American artists Jackson Pollock and Stuart Davis were—and even some artists from the present generation are dedicated vinyl or CD collectors of vintage and classical music. Among these band of musical artists is abstractionist Edwin Wilwayco, who is  showing his latest works, under the collective title of “Correspondence with Satie.”

The show at   Galerie Roberto, may even be timely, albeit a belated birthday gift for the composer, as his 150th birth anniversary had just been celebrated in 2016.

Satie, of course, is Eric Satie, the eccentric French composer and pianist, (1866-1925), regarded as a “torch-bearer of the avant garde,” counting among his friends, Brancusi, Duchamp and Man Ray. In one innovative theatrical piece titled “Parade,” Satie worked with Picasso (sets and costumes), writer Jean Cocteau, and Serge Diaghilev’s Ballets Russes. He was hailed by fellow composers Debussy, Ravel and Poulenc. Undeniably, Satie’s most famous works are the three piano compositions, “Gymnopedies,” now a “pop classic.” The strange title is defined as “a nude dance, accompanied by song, which youthful Spartan maidens danced on specific occasions.” By instruction of Satie, they are to

Wilwayco’s works are anything but “atmospheric”—they are in fact bold,  bristling and brazen as pictorial creations, nothing ambient about them, even threatening to consume all the oxygen in the room. They are therefore not to be taken as visual equivalences, transliterations or interpretations of the music of Satie.

Where Wilwayco is unique is that he is the single Filipino abstractionist who has systematically sought his inspiration within the music chambers of Bach, Vivaldi and Shubert, as well as the symphonic halls of Brahms and Dvorak.

More impressively, Wilwayco has created a body of works which was presented in sequential exhibitions. The artist has been systematic in the sense that he immerses himself in the ineffable ardor and passion of a particular composer’s musical oeuvre. This he has done with Satie, for which reason Wilwayco’s  abstraction continues to flourish. Music to this artist is a stimulant, a delectation, a provocation, through which Wilwayco avoids painting himself into a corner, as it were, despite what some concerned quarters may decry as an alarming prolificacy. If fecundity is a curse, then it must be a most welcome one.

Holding a “conversation” or “correspondence” with another artist—whether of visual, musical or choreographic persuasion—is not dissimilar to paying tributes or homage to the  artist.

And with Satie: What has Wilwayco wrought? From this artist, whose work we have documented since way back in the ’80s, we have always expected the richness and luxuriance of gestural painting, with its sensuous delirium in the matiere of paint itself.

Wilwayco has gone from strength to strength, his works charged, at times by a fulsomeness and flashiness that dared to venture into extravagance, in an accelerating crescendo of exhibitionist “arias.”

But the visual pitch is always sustained, the tension between lyricism and turbulence perilously balanced, for such is Wilwayco’s gift for organization of chromatic and ornamental passages, that seem discordant and in disarray at first glance, ungovernable, but upon more restrained gazing at the works, reveal themselves to be contained and composed, in accord with the artist, as though conducting, with a paintbrush as a baton. –CONTRIBUTED