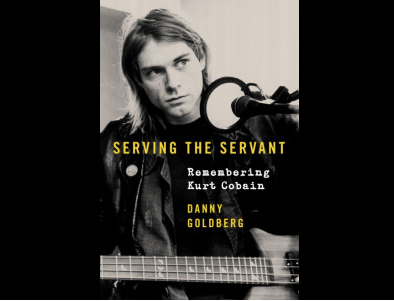 Danny Goldberg is publishing his book just ahead of the 25th anniversary of Cobain's death. Image: courtesy of Ecco via AFP Relaxnews

The former manager of Nirvana is marking the 25th anniversary of the death of Kurt Cobain with a book honoring the late singer and drawing on memories, archives and interviews with those who were close to Cobain.

“Serving the Servant: Remembering Kurt Cobain” is written by Danny Goldberg, who became Nirvana’s manager in 1991, when the band was earning critical acclaim coming up from the Seattle underground music scene.

Goldberg worked with Cobain in particular from 1990 to 1994, the formative years that included the huge success of the album “Nevermind”, which turned the band into a household name; Cobain’s meeting and marriage to Courtney Love, and the birth of their daughter; and his public struggles with addiction.

In “Serving the Servant”, Goldberg draws on his own memories of Cobain as well as files that have never before been made public, plus interviews with Cobain’s close family, friends and former bandmates.

Advance praise for the book comes from such music luminaries as Sonic Youth’s Thurston Moore, who calls it “insightful, passionate and cleareyed,” and Joan Jett, who reviews “any music fan should want this book. Any Nirvana fan must have this book.”

“Serving the Servant: Remembering Kurt Cobain” will be released on April 2, three days before the 25th anniversary of Cobain’s death on April 5, 1994. JB