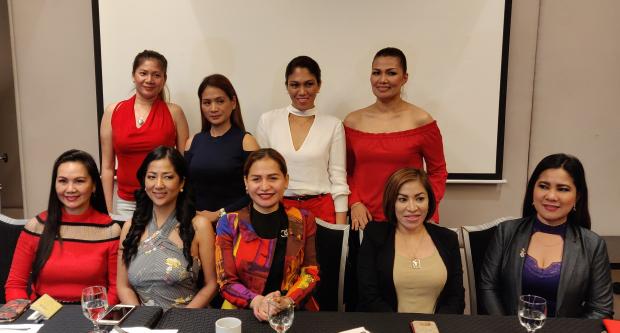 Mrs. Philippines Asia Pacific organizer Mitzi Go-Gil (seated, second from left) is joined to her right by a member of the tabulating committee and some of the pageant’s judges (seated), as well as four of the contest’s participants (standing). (Photo by ARMIN P. ADINA / Contributor)

Pageant head Mitzi Go-Gil, together with some of the contest’s judges and a member of the tabulating team from her charity group Queen of Hearts Foundation, gathered pageant scribes at the City Garden Grand Hotel in Makati City on Wednesday evening to clarify certain matters related to questions raised against the beauty contest.

Some of the losing candidates also attended the press conference.

“The results are being contested,” Gil said, citing some netizens’ accusations, who asked that the official tabulation of scores be released as announced by the contest’s host.

The coronation program of the pageant’s inaugural edition was held at the Treston International Event Center in Taguig City on Feb. 3.

“Ana Morelos, candidate number four, could not accept she failed to enter the Top 7,” Gil said. “We will release the scores today.”

Some members of the local media who attended the coronation ceremonies told Gil during the press conference that the winners were deserving. But they still reminded the organizers of a commitment made during the program to show the tabulation of scores, even if it was not standard practice for pageants.

One of the losing candidates who was at the press conference demanded to see the final tabulation of scores. However, members of the pageant committee who are in charge of keeping the official documents did not bring the score sheets, even if they were instructed by Gil to have the papers ready for the press conference.

The team instead supplied an Excel spreadsheet, which was displayed on the projector.

The slide showed the breakdown of scores:

However, the pageant scribes and the losing candidates still demanded to see the actual hard copy of the score sheet, just to settle the matter once and for all.

Citing issues in logistics, and the pageant committee’s failure to immediately produce the questioned documents, the organizers decided to gather all the concerned contestants for dinner some other time, where the actual score sheets signed by the judges will be made available.

Several other “problems” were raised during the press event, such as the disorganized seating assignments, the unusually long program which ran for over six hours, and a supposed walk-out by one of the judges.

One of the judges who attended the press conference clarified that the judge in question, Andy Diokno Marantal, had to leave early to attend to other commitments.

Gil also showed a text message sent to her by Marantal dismissing the allegations made.

She promised to address the issues raised, saying she has learned her lessons.

She also said she was looking into hiring another team to comprise a new pageant committee, which will then organize the Mrs. Philippines Global Universe pageant in April.

Sunday’s winners will be sent to different international competitions taking place this year, mostly in Singapore and Malaysia. /atm