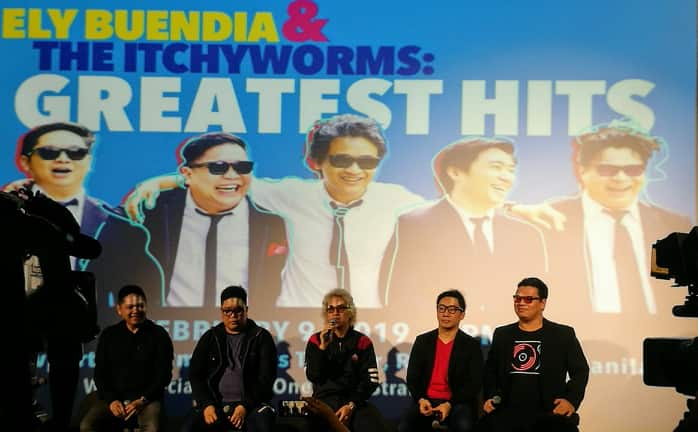 Ely Buendia and the Itchyworms

Past and present: Ely Buendia and the Itchyworms in concert, Feb. 9, Resorts World Manila>

Ely Buendia and the Itchyworms have been friends for so long, they were teasing each other at a recent media reception to announce their concert, dubbed “Greatest Hits,” to be held Feb. 9 at the Newport Performing Arts Theater, Resorts World Manila.

After Jugs Jugueta recalled that the Itchyworms started listening to Buendia’s band, The Eraserheads, during high school, Buendia countered that he was in grade school when he first heard of the Itchyworms.

Seriously, the E-heads was the country’s top band in the late ’90s when its members, including Raymund Marasigan and Buddy Zabala, started helping the Itchyworms get into the music scene, even producing its 2005 album “Noontime Show.”

In late 2016, Buendia and The Itchyworms collaborated on two songs, “Lutang” and “Pariwara,” released on CD and online by Buendia’s indie label Offshore Music Philippines.

The project feeds off Buendia’s boundless energy that extends to his other creative pursuits, including a CD sampler, “Offshore Music Vo. 1,” a 12-track album of all-original material from the likes of Jun Lopito, The Late Isabel, Blue Jean Junkies, Ourselves the Elves, Buendia’s current band Apartel, among others.

“Pariwara” is vintage Buendia and classic Itchyworms–their common bond expressed in the song’s wry lyrics, about the generation gap between parents and the youth, infused with jangling guitars and a happy beat.