And then there were four . . . | Inquirer Lifestyle ❮ ❯ 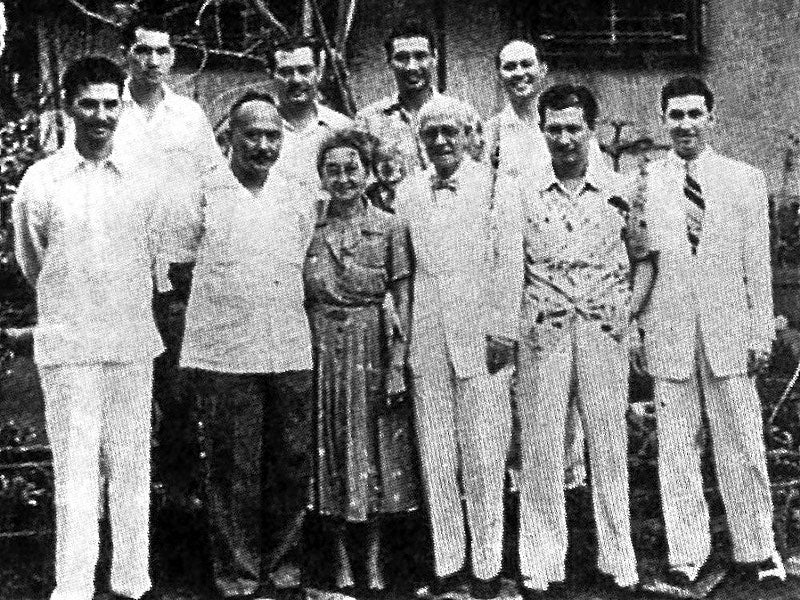 Tito Anding’s death on May 23 has brought the brothers’ bald head count to four—two older ones, and two younger—from the original nine born of Rafael Filomeno Gonzales Roces and Inocencia Reyes. It was very much like him, who always did things differently, to die out of turn and not follow the chronology of their births.

Eldest brother Liling had been the first to go, a freedom fighter martyred toward the end of the war; he was 32. After that, it seemed to me that fate had given our family a long and well deserved respite from death, whose visits indeed came far between and never even remotely as traumatic.

My generation is told that, after what seemed an inordinately long and much grieving over Liling’s death, my grandfather gathered his surviving sons around Lola, the chief inconsolable mourner, and had Tuting, the second son, step up and speak, “Mama, you have lost one, but don’t forget there are still eight of us left.”

Not until 27 years later did death come visiting again. At 81, Lolo, a life-long smoker, lost his battle against emphysema, and Lola did not follow until 11 years later, going at 91. Both were spared having to live through another son’s death.

Tuting died at 80, 22 years later. But Chito, brother number six, like Anding, followed out of turn. My dad, Titong, who had arrived third, should have been next by chronology.

Generally, anyway, the brothers have proved themselves of sturdy stock, notwithstanding their weaknesses for sweets or spirits.

Simply, Chito’s was a case of, as the idiom of self-indulgence goes, burning one’s candle at both ends. In fact, only two of the brothers—Liling and Tuting—have been outlived by their wives.

But of all of the five widowers, the most sought was Anding. My dad was a different case altogether: he had his own ladies in waiting, ready to fill his first lady’s shoes even before she was ready to kick them off for good.

Tito Anding, a legitimate widower and, thus, fair game, was the most social and most public of the brothers and had the charm to go with the profile. He is especially remembered for his storytelling, although Tito Pipo may well beat him at it—he was, after all, Anding’s source for his celebrated cockpit tales.

All brothers had that disarming smile, owing chiefly to perfect teeth. But Anding did possess more than a Colgate smile. An asthma sufferer, he became a health buff; he jogged and boxed to keep himself trim, and did seem easily the most fit of the brothers. He had had two heart surgeries but quickly afterward was pronounced healthy, all things considered.

I remember visiting him in the hospital after his first operation and finding him his old jovial self. “You know,” he said, “after my surgery, people in this hospital cared only about one thing. Nobody asked how I was feeling or even said hello. All they wanted to know was whether I had already farted.”

He was always prepared to disprove nonbelievers. Any lady who offered a hand to be pumped would likely find it landing on his abs. She may have no recollection of how it got there, but not how hard those abs felt. He challenged younger men to punch him in the stomach and squeeze his biceps. A friend of his once told me he was afraid that if Anding so much as glimpsed someone familiar across the street he would drop for pushups.

He was certainly comfortable being the center of attention. A walking book of quotations, he could be counted on for an appropriate one for the occasion. My dad had the same facility.

In fact, Anding and my dad fancied themselves the family’s intellectuals, and some undercurrents of rivalry ran through their relationship. Dad wrote for the Roces-owned Manila Times, Anding for the Lopezes’ Manila Chronicle. Dad, who preceded Anding in politics and won five straight terms as a Manila congressman, was a Nacionalista party man; Anding was a Liberal. He never won an election himself, but would become better known.

Since Dad retired from public service, they had become increasingly close, later speaking to each other almost everyday until one day, Anding stopped calling and refused to take Dad’s calls. I know because it was I Dad would ask to dial the number.

When I bumped into Tito Anding, he grabbed my arm and tried to explain. Dad’s conversations, he said, usually began very well, but then deteriorated to a point where he would ask, “By the way, Anding, how’s Mama?” It depressed him so much, he said, he wouldn’t hear any more of it.

Tito Anding, who would have turned 87 in July, outlived Dad by just over a year, but he had become too ill himself to see Dad as he lay dying or come to his wake.

In his own final days in the hospital, brother number four, Peping, and number eight, Marquitos, visited him whenever allowed. Marquitos told me, “We were there, but he kept talking to the dead ones—Tuting and Titong.”

He had actually begun to show signs of losing it fairly earlier but had managed still to charm crowds.

Toward us nieces, he was always accommodating, but especially toward Ninit, who has a way with old folks. He always obliged us as a guest speaker at the little forest park our organization built in Arroceros, Manila, for environmental programs we occasionally mounted there.

On one occasion, he had gotten carried away with stories about the Pasig River, Mehan Garden, and others places farther afield, until Ninit cued him back to Arroceros. One cue, and he was his masterful— and relevant—raconteur again.

I will never forget the ease and grace with which he did it. Speaking at his own wife’s wake, he somehow strayed into his own war and life’s experiences, Tita Irene completely forgotten. Ever watchful cousin Ninit caught his eye and directed him toward the urn. Without missing a beat, he proceeded to close, neatly: “And where was Irene in all this? By my side, all the way.”

This time going against a family tradition of delicadeza, he ignored questions raised over his nomination for National Artist for Literature. Gloria Macapagal-Arroyo, the president, would have given him the moon if she thought he wanted it. He was very close to her family, her father and president before her in particular. He had been President Diosdado Macapagal’s secretary of education and cultural counselor. Macapagal’s birthday happened to fall on the same day as my dad’s and Tuting’s, but the two brothers could not compete with the president: It was always his birthday party, all the way in his hometown of Lubao, Pampanga,  that Anding preferred to attend. It was a case of what else but amor con amor se paga—love with love is repaid.

Many begrudge Anding his award; indeed, its circumstances have been controversial, to say the least. But I know he was thrilled by the whole idea of it, not the least the attendant privilege of being buried at the Heroes Cemetery. Not even the legitimate hero and martyr Liling lies there.

The Roceses live extraordinarily long lives, but they like things simple and unceremonious, and tend to rush burials. But then, Tito Anding had always been different: He had openly relished the idea of a privileged burial.

His remains arrived in the chapel at  Heritage Park in a carton box, the kind I remember wedding gowns delivered in. I didn’t think it strong enough to hold deadweight, but it began to look familiar: It was the same sort of box my mom had been put going into her own cremation.

When Lizzie, Anding’s daughter, saw family members wide-eyed and open-mouthed at the sight, she said: “Dad said not to waste money on a casket he didn’t need in cremation.”

All eyes were on the box, at any rate, and the hush was broken only when someone said, “Para namang ipapadala sa FedEx.”

Tito Peping and Ramon Pedrosa, Lizzie’s father-in-law, sat in the front row, and Marquitos whispered to me: “I was going to sit there, but Anding told me that whenever three bald heads sit together it could only mean they were opening a pawnshop.”

He was all giggles, but I didn’t get it, and I’m not sure either I got the quotation ascribed to him in the prayer cards distributed at the service for him:

Lord, do unto me as I would do unto you

Looking lost herself, visiting cousin Candy Jalbuena Ortoll turned to me and said: “I will have to think hard about that.”

In less than two hours, it was time for cremation. As he was being taken away, someone asked if there was a priest for a final blessing, but Lizzie said, “It’s okay, Dad had been blessed several times in the hospital.”

Indeed, he had been blessed.