To divinity and beyond: Questions over Ukraine space church's future | Lifestyle.INQ ❮ ❯ 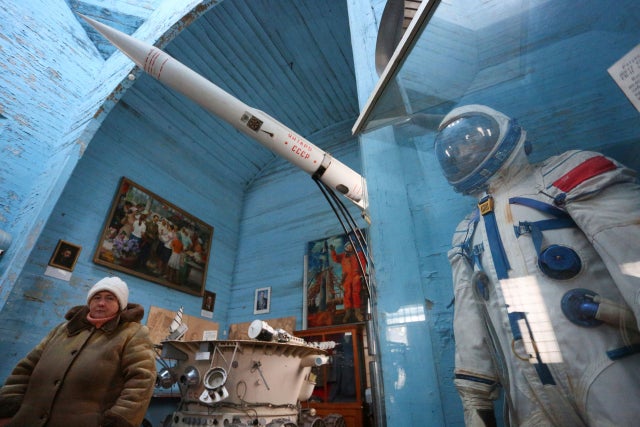 A guide waits for visitors at the space museum located in Saint Paraskeva church in Pereyaslav-Khemlnytsky, a small town some 80 kilometers southeast of Kiev. Image: ALEKSEY FILIPPOV / AFP

To divinity and beyond: Questions over Ukraine space church’s future

Inside a traditional Orthodox church topped with a gold cross, instead of icons, visitors can see a lunar rover and the helmet of the first man in space Yuri Gagarin.

The wooden church in central Ukraine is one of thousands of buildings that were repurposed or simply destroyed during an anti-religion campaign in the Soviet era.

But now some believers are asking whether it’s time for the blue and grey painted structure to be returned to the Church, especially as Ukraine is undergoing a religious revival.

Last month the country created its own Orthodox Church in a historic break with the Russian Orthodox Church, against a backdrop of its ongoing war with Russia-backed rebels in eastern Ukraine that has killed more than 10,000 people.

“Today, when it is no longer forbidden to pray and believe in God, the church must be used as a place of worship,” said priest Mykhaylo Yurchenko, from the new Ukrainian Orthodox Church who serves in one of the nearby churches.

Museum staff says clerics have visited and even tried out the acoustics, but there are no plans to reconsecrate it.

“The museum was founded in the 1970s,” said Sergiy Volkodav, its 37-year-old chief curator.

“It happened when space flights were wildly popular and every boy dreamed of becoming a cosmonaut,” he said, standing beside a spacesuit worn by cosmonaut Vyacheslav Zudov for a spacewalk in 1976.

Built in 1891, the Church of Saint Paraskeva houses over 450 exhibits, including a scarlet training parachute belonging to Gagarin, a collection of portraits of him and other personal items of the cosmonaut whose historic 1961 space flight made him a Soviet icon.

The museum is part of a vast outdoor ethnographic complex, located in Pereyaslav-Khmelnytsky, a small town some 80 kilometers (50 miles) southeast of Kiev.

‘As cold as in space’

Soviet anti-religious propaganda used images of space exploration to persuade people that God did not exist.

The Soviets also put some former churches to ideological use such as opening a museum of atheism in a cathedral in Leningrad, now Saint Petersburg.

Some other churches were converted into planetariums.

Volkodav said that, in opening a space museum in a church, the Soviet authorities’ intention was not necessarily to mock religion.

They simply chose a building that could display large exhibits that include a model rocket several meters (feet) high, he said.

Some, like Volkodav as well as priests and other locals, argue that the creation of the museum, in fact, saved the church from destruction.

It formerly stood in a Cossack village that was deliberately flooded to build a vast reservoir in the 1960s.

The church was one of the few buildings to be painstakingly dismantled and moved to a new location.

One of those who lived in the village, Borys Stolyarenko, a 60-year-old mechanic, recalls services being held there in the early 1960s.

“Later, when the Soviets turned it into a granary, we climbed through its windows with my friends and jumped down into the grain,” he said.

He has no photographs of his former home village, he went on.

“All I have is this church. The creation of the museum saved it,” he added.

Today though, the museum looks like it has seen better days. The exhibits are shabby and blue paint is flaking off the interior walls.

Most visitors come in summer due to the lack of heating: a thermometer inside displays minus 10 degrees C (14 degrees F).

“It’s as cold as in space,” joked a museum employee, wearing a sheepskin coat and hat.

The fall of the USSR and the proclamation of Ukraine’s independence in 1991, followed by religious freedom in this predominantly Orthodox country have not changed the museum’s status.

Father Feodosiy from the local Orthodox monastery, loyal to the Moscow Patriarchate, said he would like to see the museum return to the Russian Orthodox Church.

But if it were to go to the new Ukrainian Church, he would rather see it continue to host space exhibits, he said.

“In the situation we have now, it’s better to have a museum there than those schismatics” from the independent Church, he said.

Some locals have suggested moving the space exhibition to another location and opening a museum of religious icons in its place.

But Volkodav is resolutely opposed.

“This is the only space museum in a church in the whole world… it’s unique,” he claimed. NVG

Space: The next frontier for Filipinos