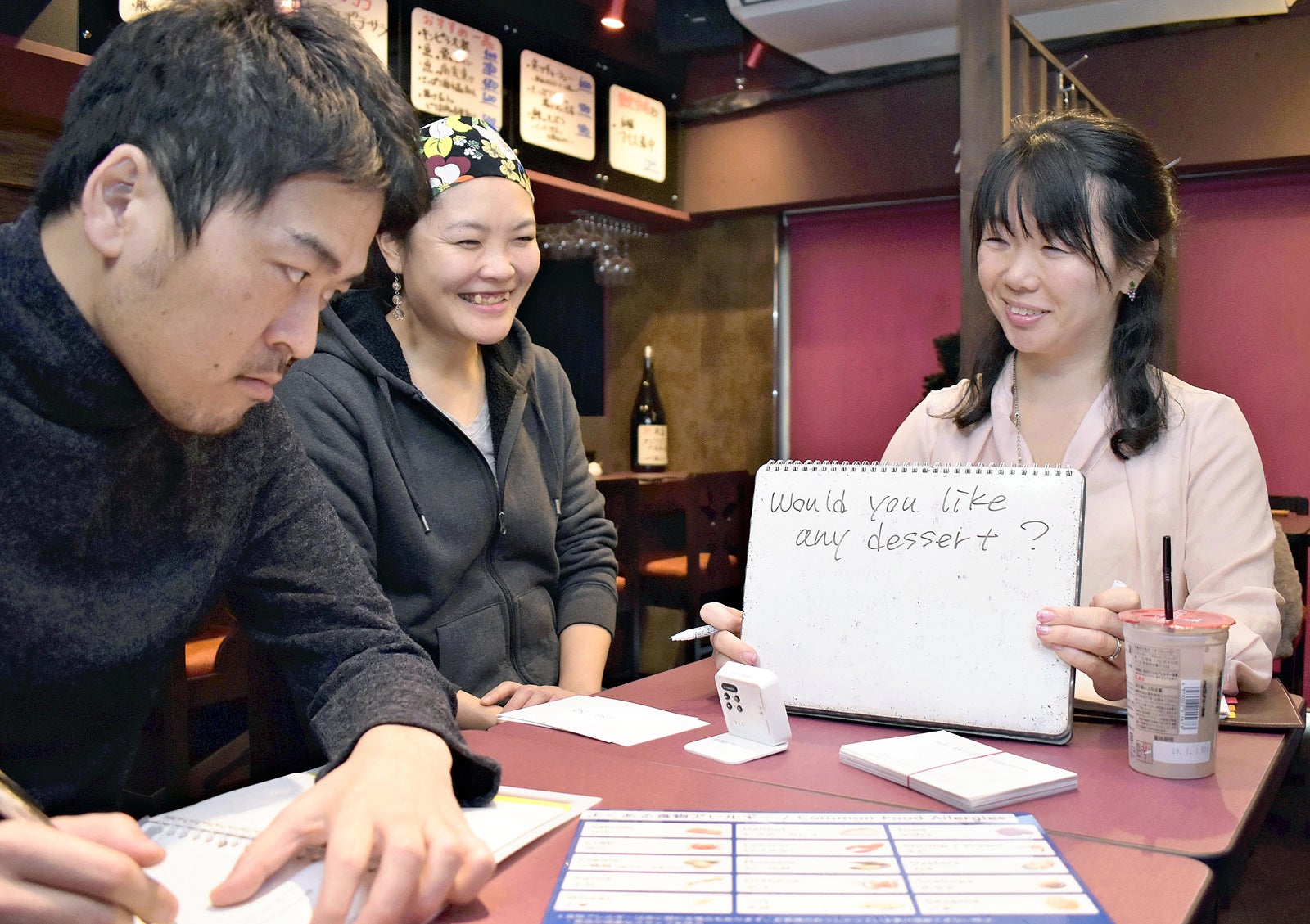 TOKYO — More small businesses in Japan, including restaurants and stores along shopping streets, have been making efforts to improve the quality of their foreign-language customer services.

The number of foreign tourists in the country has dramatically risen, resulting in an increase in tourists who visit even local commercial districts. Similar measures have already been taken by major businesses such as department stores and home appliance retailers.

With the 2020 Tokyo Olympics and Paralympics approaching, small businesses also have been compelled to tackle the situation.

A 32-year-old male employee repeated the English sentence at a restaurant in Minato Ward, Tokyo, one day last December.

Gambrinus Roppongi, a restaurant featuring craft beer and washoku, has many foreign customers, so it asked Miki Uchiki, an expert who teaches English conversation for customer service focusing on restaurants, to give regular lessons to the staff.

Uchiki, 36, also provides ideas that lead to better earnings. “Propose a specific dish to the customer by saying ‘We recommend A,’” she said. Using just such an expression, customers may be inclined to order the dish.

Having worked in restaurants in the United States, Uchiki points out that even a little conversation, such as asking, “Where are you from?” will give customers a friendly feeling that may encourage them to visit again.

While the number of foreign tourists visiting Japan reached a record of 31.19 million last year, the improvement of foreign-language customer service skills is still a major issue.

Last year, the Institute for International Business Communication surveyed 500 people who interact with customers about their command of English. According to the Tokyo-based general incorporated foundation, 70 percent of respondents answered that their English was faltering or that they only speak a smattering of the language.

A lack of skill or confidence in English can sometimes lead to problems on the job.

In 2017, it was found that a 71-year-old part-time worker at the Shinjuku Gyoen National Garden ticket window had been neglecting to charge entrance fees for some foreign visitors for about two years and eight months.

The worker is said to have explained: “I handed over entrance tickets because I was scared. I don’t understand foreign languages, and I have suffered from the trauma of being yelled at by foreigners.”

Measures are also moving ahead in the local shopping streets, which are attracting greater numbers of foreign customers.

Yasufusa Murata, 66, the owner of an umbrella store in the Musashi Koyama shopping area, said: “We have lots of customers from Southeast Asia. If more people become familiar with English before the Olympics, we will also be able to welcome [visitors] with hospitality.”

Good signs in the services industry

However, language skills cannot be improved overnight, and there is also a trend for interpreting devices to be used when striking up a conversation.

Pocketalk by Sourcenext Corp., a Tokyo-based company, is a device supporting 74 languages. More than 200,000 units of the device were shipped last year. Senior Managing Director Tomoaki Kojima explains that the Pocketalk “is used in places like accommodation facilities, while there is also a strong demand for the device for language learning purposes.”

At the end of last year, Shinjuku Gyoen National Garden supplied two units to its patrol staff and other staff.

Trends are accelerating even in an industry that was fast to take measures in response to these issues.

Since fiscal 2012, Tokyo Taxi Center, a public interest incorporated foundation, has conducted training for its taxi drivers in English conversation and foreign customs. After completing training in areas such as how to provide assistance to people with disabilities, drivers who passed the centre’s English test are awarded a qualification known as ECD or English Certified Driver.

Last December, a new lane for taxis displaying ECD certification stickers was set up in the taxi pool in front of the Yaesu Exit at JR Tokyo Station in response to the needs of international customers who wish to be served in English. There are 235 certified drivers at present, with a target of 500 by the time of the Olympics.

Reirei Kaku, a senior consultant at JTB Tourism Research & Consulting Co., explains: “Once shops and facilities start to support foreign customers in such a way, cross-cultural understanding is deepened, and this impacts positively on the thinking and behavior of the staff, while also having the benefit of invigorating the organization. Once one store becomes successful in attracting customers from other countries, the economic effects will ripple out to the surrounding shops.”