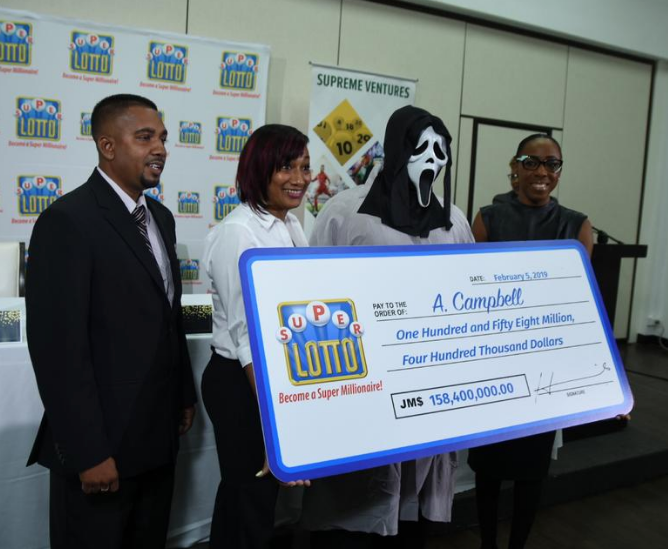 One man from Jamaica rocked a Ghostface mask from the hit Hollywood movie “Scream” when he recently collected his check of JMD158.4 million ($1.1 million or P61 million).

The super-millionaire, known only as A. Campbell, won the jackpot after buying a Super Lotto ticket for JMD200 ($1.5 or P77), as per St. Lucia News Online on Feb. 6. He picked up his check at a handover ceremony at Spanish Court Hotel in Kingston on Tuesday, Feb. 5.

Campbell did not immediately collect his prize money upon discovering he hit the jackpot, the report stated. He apparently got sick on the day he found out he won the Super Lotto last Nov. 23, 2018 and waited 54 days to come forward.

“I found out (I won) the same night. Normally, I would write down the numbers from the [televised] draw, eat and then go and check my numbers,” Campbell was quoted as saying. “I looked at my ticket (that night) and ran into my bathroom and said: ‘I won! I won!’”

Although he is still in disbelief, Campbell shared he already has plans on what to do with his winnings. He expressed his desire to get a house and use some of the money to make his business even bigger, among others.

“I want to get a nice house. I haven’t found it yet, but I’ll be looking for one soon,” he said. “I don’t beg, I don’t borrow. So I’m looking at things that can turn over the money. I have a little business, so I plan to make it bigger, buy an apartment. I love to have money.” Cody Cepeda/JB