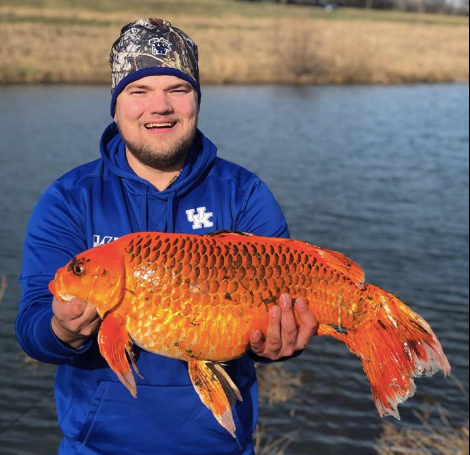 Man catches massive ‘goldfish’ with just a biscuit — then sets if free, back into pond

One avid fisherman from Danville, Kentucky did not expect he would be reeling in a 20-pound fish using just a biscuit — but that is exactly what happened.

Hunter Anderson, who works at a bait-and-tackle shop part-time, learned how to fish from his father from the moment he could hold a rod and reel, as per WKYT on Feb. 11. Anderson and his girlfriend were driving back from Frankfort over the weekend when the two dropped by a private pond in Boyle County, known for its koi and goldfishes.

Using just a piece of Lee’s biscuit from their meal early that day, Anderson dropped the bait in the water and attracted the catch.

“Believe it or not, we ate at Lee’s earlier in the day, and I took a piece of Lee’s biscuit and put it on a hook, threw it out there and that fish ate it,” he was quoted as saying.

A photograph of Anderson’s massive catch was shared on Facebook by his sister Cassie on Feb. 10. It showed him holding the huge fish in his hands.

“This is my brother!! Who is holding what could possibly be… that pet goldfish we flushed when I was 9!!!” Cassie said in jest. “I swear, I thought you were dead, Bubbles!!! Oh my gosh don’t flush your pets!”

What you are witnessing is NOT national geographic! It is not a stolen image or edited photo! This is my brother!! Who…

His sister’s post has since garnered over 1,000 shares and almost 2,000 shares since the time of posting. Meanwhile, Anderson noted that he has not seen anything like the fish he caught, wondering perhaps if it may be a record.

“I guess people have just never seen anything like it,” he said in the report. “I know I haven’t.”

Regardless, he still made sure to return the fish where it belongs — right back into the pond.

“What am I going to do with it, really? I thought it deserved to swim another day,” he added. “Maybe somebody else will catch it. Maybe a kid will catch it and be as happy as I was. I was jumping for joy.” Cody Cepeda/JB