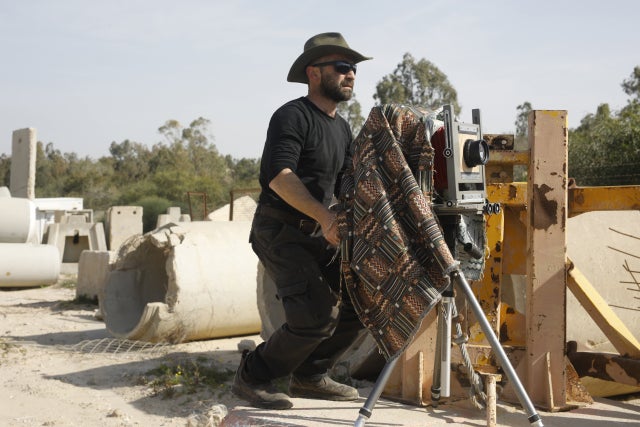 Edward Kaprov makes a final adjustment to the oversized, traditional-style camera perched on a heavy tripod aimed at an Israeli military jeep near the Gaza border.

“Let’s give it a shot,” the 43-year-old says as he strides briskly to the tent that serves as his darkroom.

Kaprov, a professional photographer, says he took to the mid-19th century wet-plate collodion process as part of an artistic project to “create a dialogue between the past and future.”

The method entails coating a glass plate in liquid substances, fixing it in the camera, exposing it for a few seconds and then developing it — all within 10-15 minutes.

Technological advances are all but ignored in the process which has remained nearly unchanged since it was invented in 1851 — though Kaprov does use his smartphone as a light meter.

Kaprov unloads a table, basins, coolers and plastic jerrycans from the back of his panel van and deftly sets up his field darkroom in the tent.

He brushes clean the plate and carefully pours the collodion mixture on it.

Then he inserts it into a silver nitrate solution, which upon exposure would turn dark, with the collodion solidifying the forms to the plate.

Kaprov returns to the camera with the black magazine containing the wet glass. He inserts it, pulls out the magazine and leaves the glass in.

Covering himself with a blanket as he stoops over the camera, he opens the lens and counts out loud to three before retrieving the glass.

Back in the tent the plate is carefully removed and treated before being taken out into the sun, still immersed in liquid — as the images of the military vehicle and gate appear on the glass.

The end product, a piece of glass roughly the size of A4 paper, doesn’t reveal the labor put into the process.

“And now, a cigarette,” Kaprov sighs in relief as he pats his pockets for his rolling tobacco.

The outdated technique is worth its remarkable hassle to Kaprov, who began a series of Israeli border images nearly 10 years ago using a regular digital camera, and around the year 2015 had something of an epiphany.

“I suddenly understood that I had to continue taking the pictures the same way the first images from the Holy Land were produced to create a dialogue between the past and future,” he says.

He spent a year learning about the technique through books and internet tutorials, experimenting with potent chemicals and assembling the necessary equipment before he was ready to hit the road and resume work on what is now called the Borderline Personalities Disorder series.

Kaprov’s interest in borders is part of his own quest to define or understand his place in Israel, the country he left his native Siberia for at 17.

“I haven’t really found myself since leaving my homeland for my historic homeland. I’m still searching,” he says.

With his cropped hair, short beard and trim physique, Kaprov looks every bit the outdoor man he is, spending days in the field seeking interesting frames in the company of his mixed border collie Robin.

“Even my dog is borderline,” he says with a grin.

Israel’s frontiers tend to be marked by ominous fences fending off the unknown dangers of the surrounding Arab states and entities.

The absence of hikers, tourists and industry in much of those areas afforded him not only the raw images that could correspond with the old ones, but also much-needed peace of mind to focus on his art.

“I escaped one utopia only to find myself in another,” he says of his move from Communist Russia to the Jewish state.

The slow pace of the wet plate technique, used by just a few other photographers professionally in Israel, necessitates a special focus not only from the artist but also from his human subjects, who “enter a meditative state-of-mind,” Kaprov says.

And while using this method deprives most the opportunity for spontaneity — one of modern photography’s key characteristics — its ancient novelty attracts attention.

The soldiers who were in the jeep on the Gaza border approached Kaprov by the tent to see what he was doing.

A brief encounter led to the four paratroopers agreeing to pose for him on the same backdrop of their vehicle, accompanying him back to the tent again to see the outcome of the picture.

“As much as I’m result-oriented, there’s no denying that the process is a very central part of the issue,” Kaprov says later.

“It’s like magic taking place, to me and anyone around.” CC

3 Filipinos to vie for the ‘Oscars’ of photography in NY