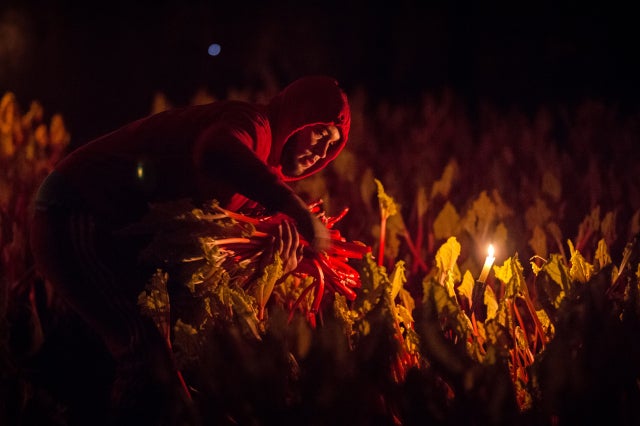 It is rhubarb harvest season in the candle-lit sheds of northern England, where farmers are cashing in on a new trend for the vegetable in modern British cuisine.

Farmers in the “Rhubarb Triangle,” whose points traditionally are the industrial Yorkshire cities of Bradford, Wakefield and Leeds, have been growing the plant the same way for over a century.

“There’s no way of improving, we grow it almost exactly the same way as we did 100 years ago, there’s no other way to do it,” Robert Tomlinson, a fourth-generation rhubarb farmer, told AFP.

Rhubarb is initially planted outside, where they grow slowly for two years in Yorkshire’s wet and cold soils before being taken into heated sheds in the autumn.

The purple stems then grow at a rapid rate, using the energy stored up during their time outside, and are picked in late winter.

“At certain times in the shed, you can hear it creaking and groaning because it grows that fast, it can grow six or seven inches in three or four days,” said Tomlinson, whose farm is one of four in the region with protected designation of origin status for speciality produce.

The process, known as “forcing,” was developed in the late 1800s after the plant was initially brought over from Siberia for its purported medicinal qualities.

It then graced dinner tables for generations in a dessert known as rhubarb crumble, traditionally served with custard.

But a new generation of chefs were drawn to its deep red color and sharp flavor, combining it in savory and sweet dishes, and even making rhubarb champagne.

“It’s got its own unique flavor, it’s like nothing else,” said Tomlinson.

“It did go out of fashion but people are realizing it’s not just crumble now, you can use it with all sorts of stuff,” he added, saying it paired particularly well with “mackerel, venison, or any oily fish.”

He credited more colorful and less acidic varieties developed in the 1960s for the plant’s resurgence.

“Over the last 10 years, demand has increased massively,” he said, explaining that he regularly ships the product to restaurants in Switzerland and New York. CC