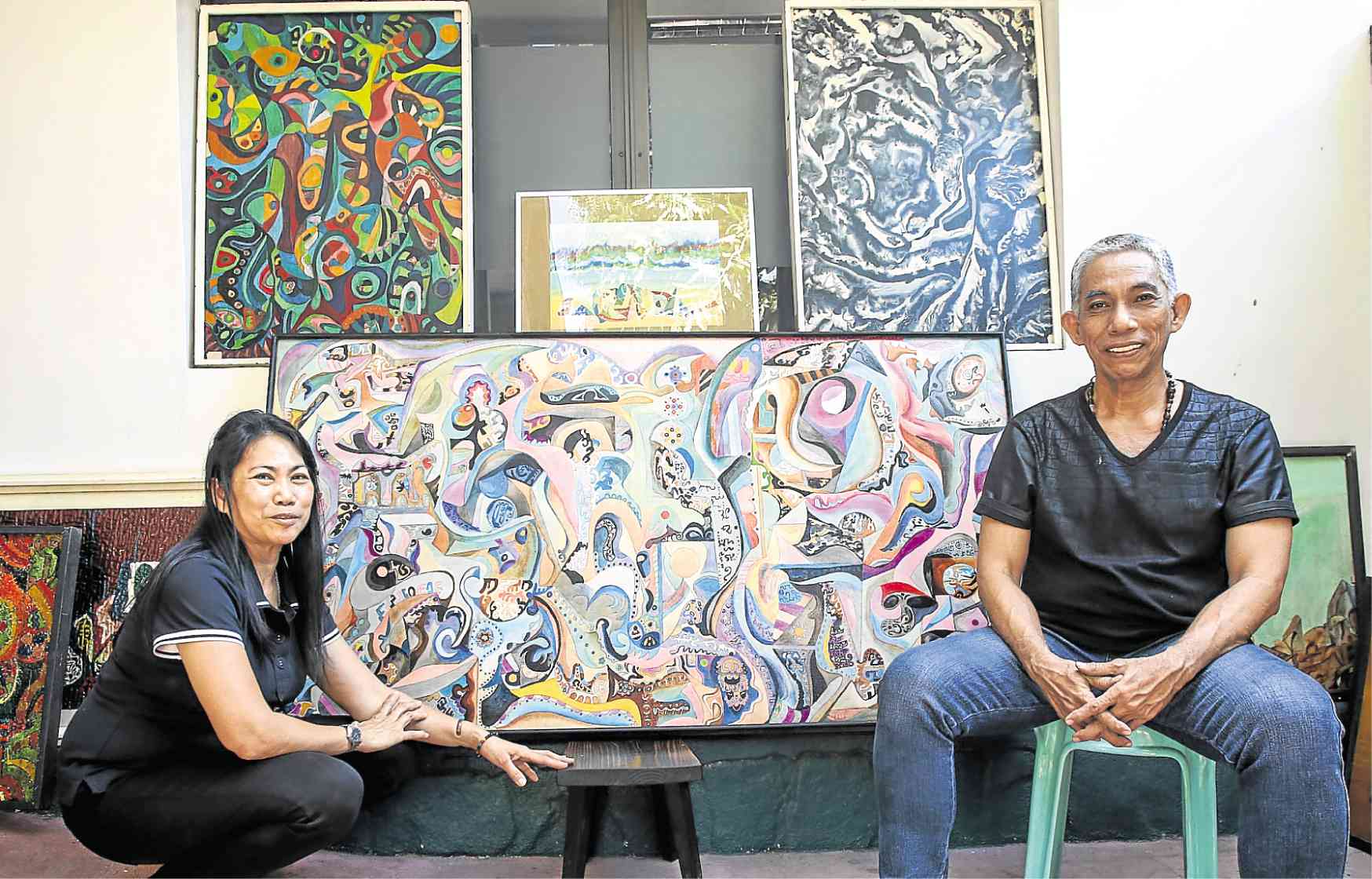 Monica and Joey Ayala with some of their father’s artworks.

“Ayala’s unusual paintings are bound to affect the premises and assumptions of Philippine contemporary art,” wrote Leonidas V. Benesa, considered the dean of art criticism in his day, in 1976.

A few years later, he noted that Ayala’s work “deals with images that are usually associated with dream or myth. Also the colors used are out of this world, a psychedelia of reds, blues and yellows straight out of Carlos Castañeda’s separate reality.”

Describing Ayala’s paintings as “zenscapes,” George Staunch wrote: “Ayala is genially absorbed with infinity. He will place his conceptions within it, clearly ‘spaced out’ in the nicest sort of way. Your perceptions flow more freely when you are viewing his paintings.”

Ayala’s paintings were considered “psychedelic”—that is to say, they had the capacity to open up new vistas for viewers with the eyes to see. Like tantric mandalas, they were maps to a higher consciousness, drawn by someone who had already been there.

As early as 1969, the poet Jose M. Lansang predicted: “Ayala has already overshadowed many a contemporary painter… Ayala will burst into art circles with a tremendous splash and himself become a scene.”

But the very opposite would happen. Ayala retreated from the art scene into a hermetic world of his own making. Only an occasional exhibit every few years reminded the cognoscenti of his early artworks.

In 1972, Ayala pulled up stakes and moved his family to Davao to head the research division of the Hijo banana plantation.

It wasn’t as extreme a left turn as it might seem at first. He had studied agronomy at University of the Philippines Los Baños, and the plantation was owned by his brother, Davao tycoon Jesus “Chito” Ayala.

As head of research, Jose, or Joe to family and friends, perfected the technology for ripening Cavendish bananas for export to Japan, so that the naturally green fruit would be yellow by the time they reached Japanese supermarket shelves. Even with bananas, he had a flair for colors.

But his art also bloomed in the hothouse atmosphere of Davao. He built a studio by the sea in Tagum, Davao del Norte, which would become a hermitage of sorts.

“He realized that he was painting for himself,” says musician and writer Joey, the artist’s eldest son.

It was the creative process, the act of painting itself, that mattered most. Ayala became less and less interested in exhibiting, or even selling, his artworks.

“Dad didn’t like anyone to see him painting,” adds his daughter Monica. “He had a routine: after working all day in the plantation, he would go to bed early, get up at 1 a.m., and paint until 4. Then he would do his tai chi or kung fu exercises, go to work and start all over again. That’s why you seldom saw him painting, unless it was a Sunday. Then he might put on some classical music and paint during the day.”

His rare exhibits in Manila galleries were several years apart—finally dwindling to nothing by the 1990s.

But Ayala was painting at a furious pace, experimenting with various media, and shifting styles as the mood took him.

It was only when he developed early-onset Alzheimer’s, at age 66, that he stopped painting. When he died in 2002 from diabetic complications at 71, he left behind a studio crammed with paintings.

Contemporary art audiences will get the chance to see some of these works in a special exhibit at Art Fair Philippines 2019 from Feb. 22 to 25. Then they can judge for themselves what the fuss was all about.

Seventeen years after his death, Ayala remains an enigmatic figure.

Born in 1932 in Manila, Ayala studied at Ateneo de Manila and University of the Philippines in Los Baños, where he met his future wife, the poet Tita Lacambra.

“Mom was the editor of the school paper,” recalls Monica. “Dad submitted some love poems which impressed her. Later he said they were written for her.”

There wasn’t enough oxygen in a room for two intense artists. The couple soon arrived at a modus vivendi that would allow each the space to create. Six days a week, Joe stayed in Tagum while Tita and the children lived in Davao City, where she could write and publish undisturbed.

Ayala was already an award-winning fictionist when he discovered painting in the late 1960s. This abrupt career switch is best described in a 1986 autobiographical sketch titled, “Something curious happened to Joe Ayala”:

“In the ’60s he was one of the country’s leading short story writers in English, depicting with existential realism the life of the peasant farmer, the dock worker, the priest and the deranged convent girl, a government man, beauty and beast in a circus, prisoners in a lonely mountain-locked existence. He won major prizes for his works, some of which were printed in Asia and elsewhere. He was reprinted twice in Short Story International. He was in his mid-30s.

“Then, early in the ’70s, and as abruptly as he quit smoking five packs of Kent a day, he stopped writing and began to paint. He produced small delicate watercolors of a gentle, brooding quiet—wide expanses of horizontal space peopled by geometric shapes, ice cubes, creatures of wire or weird stones, zigzag ribbons of clouds, obelisks, strange mechanical animals. He used space like the Surrealists, but unlike them he created new forms of life entirely alien to anything one has perceived in the existence as a human being. He was creating within a unique context a form of abstract expressionism.”

Originality was of paramount importance to the self-taught artist Ayala. He kept track of the art scene only so he could avoid doing what other artists had already done.

“That was his biggest influence on me as a musician,” says Joey. “He told me: look for what is not there. Look at the spaces, not the objects.”

“He always said, ‘Don’t be afraid to be different,’” adds Monica.

Ayala certainly was “different.” A large man with the build of a sumo wrestler and the ears of a buddha, he impressed most people with the intensity of his focus.

Joey says his father was deep into esoterica: mysticism, metaphysics, Eastern psycho-spiritual practices, the occult, hypnotism, astrology, altered states of consciousness—things that might be considered “new age,” though he was anything but mellow.

He practised tai chi and kung fu, and meditation.

“He wouldn’t let us get near him when he was practising,” recalls Joey. “He thought we might get sick from all the negative energy he was releasing.”

Even strangers could sense he was not an ordinary man, Joey notes. One time, he was surprised to see his father surrounded by Muslim elders from a neighboring village.

“They found out I was a Sufi,” Ayala explained to his son.

He had boxes of anting-anting in his studio, say Joey and Monica, surrendered as tribute by local shamans who respected his psychic energy.

One time, recalls Joey, a bump suddenly appeared on his father’s neck. Joe said it might have been implanted by extraterrestrials during a visitation the previous night, to influence his art.

Joey points out that security guards in a neighboring lot once told him that they saw his father running without his feet touching the ground.

If nothing else, these stories indicate that Ayala understood the mythic dimension of art.

Four years after Joe’s death in 2002, Tita suffered a stroke and also stopped writing. She died last Jan. 9 at age 88.

In an interview the year before she died, Tita said: “Happiness is art and the art is you… the art is always you.”

If that is true, then Jose V. Ayala Jr. left a lot of himself in his paintings.