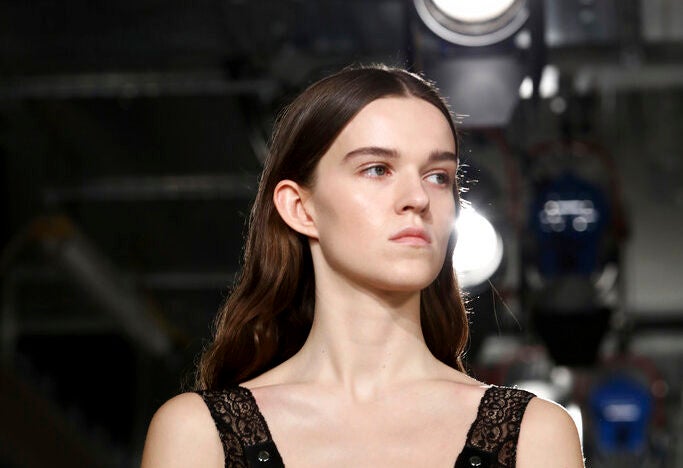 LONDON — The final full day of London Fashion Week featured a stellar show by Christopher Kane, who embraced his favorite theme — sensuality. Pringle of Scotland returned to the London stage with its signature luxury knitwear, while Erdem showed dramatic, full-length dresses and shorter cape outfits. The fashion crowd recovered from a late-night party David and Victoria Beckham threw to celebrate her new collection. The soiree featured a Spice Girls tribute band in drag paying homage to the designer’s pop star past.

Last season’s theme was “sexual cannibalism”; on Monday, Christopher Kane made the “rubberist” fetish a focal point of his new collection. It’s best not to ask too many questions of the cheerful, increasingly popular designer, who earlier built a show around “The Joy of Sex”, a book first published in 1972 that is illustrated with graphic drawings.

The Monday show was eclectic in the extreme. Many models wore what Kane called “large cupcake skirts.” They were short and somewhat structured and paired with low-cut tops or partially sheer body suits.

The pieces were imaginative and revealing: a sweater dress that transitioned into a gauzy fabric as it neared the waist; a lime-green feathery mini-dress; and a regal, dark blue dress with metallic neck decorations that looked like something Cleopatra might have worn.

Kane likes to pair elegant, well-made dresses with slouchy items like tee shirts, in this show often emblazoned with a red “Rubberist” logo.

“This show is called ‘liquid ladies,'” Kane told the Associated Press. “It’s all about the essence of women, of strong women, the fluidity of women. For me, I’ve been around these liquid ladies my whole life. Strength, character. They aren’t really empowered, they’re empowered by themselves.”

He said the show was also about human sexuality and the obsessions that go with it; hence, the rubber fetish wear theme.

“Sex is fun and it should be,” Kane said. “And people find rubber sexual. That’s OK, too.”

Canada-born designer Erdem Moralioglu used his runway extravaganza Monday to transform London’s venerable National Portrait Gallery into a Roman palace, seeking to use his dramatic full-length dresses and shorter cape outfits to capture the mood of 1960s Rome. The designer wanted to illuminate the moment when liberation movements of all kinds collided with the entrenched, conservative culture of the Italian capital’s upper classes.

Some of the elaborate dresses were masterful and complex, the product of painstaking attention to detail and untold hours of labor. The color mix was striking: a red and black floral blouse, for example, mixed with a purple and black skirt.

Pringle of Scotland is more than two centuries old, but the collection unveiled Monday shows carefully made luxury knitwear never goes out of style. After a series of runway shows filled with razzle-dazzle and a “Can you top this?” approach, Pringle offered an oasis of calm and good taste with its beautifully crafted outfits.

Many of the new outfits feature a single color — white or beige or grey — for the trousers, the top, and a hat.

Sometimes the boots match, too. Each outfit has a refreshing coherence and simplicity to the design, even if it’s hard to execute.

But the show planners were nearly undone by their failure to anticipate the ice sculptures placed on the runways for dramatic effect would slowly melt, leaving puddles where the models were supposed to walk.

As the show’s start time came and went, a man in a white Pringle lab coat came out with paper towels to mop up the puddles as best he could. The models were told to swerve to avoid the wet spots.

Only one slipped, and she regained her balance before she tumbled. MKH