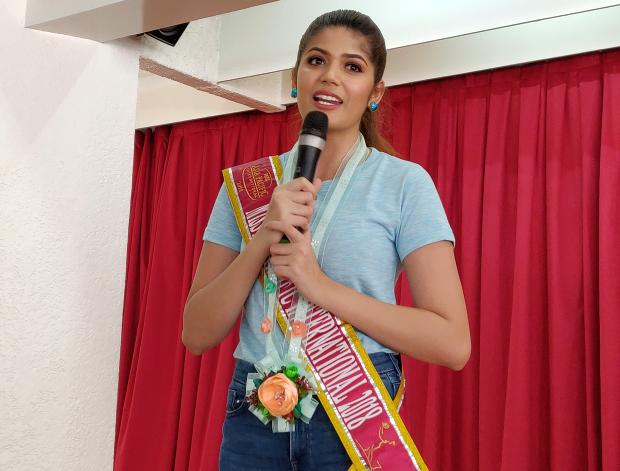 SILANG, Cavite — Sharifa Areef Mohammad Omar Akeel, the Filipino woman who made history by becoming the first Muslim woman to be crowned Miss Asia Pacific International, is taking steps to use her title as a platform to spread her message of peace and perseverance.

Just recently, the Sultan Kudarat native visited an institution for young girls run by Catholic nuns, as part of a charity program by the JCI Makati called #WeMenCare Pinay Power.

“I am just like you. I also grew up in poverty and was in the direst of circumstances,” Akeel said in Filipino to an audience of about 3,000 schoolgirls at the Sisters of Mary Girlstown in Silang, Cavite, last Saturday, Feb. 16.

“I was brought up by my single mother who had to work overseas just to be able to provide for me,” she added.

The aspiring elementary school teacher said she lived with her grandmother and aunts, and she sought ways to ease the burden of raising her, working on the side as a student.

“I went to school with my shoes all worn out. I was ridiculed by my classmates, was called names, but I never gave up,” Akeel continued, declaring to her audience that she was able to earn a college degree because of her determination and perseverance, and the help of the people around her.

However, Akeel said she had to put aside her preparations for the licensure examination for teachers to train for the 50th Mutya ng Pilipinas pageant.

And in her quest for the Philippines’ fifth Miss Asia Pacific International victory, Akeel said she still received “a lot of bashing” from some members of the Muslim community who disapproved of her choice to join a contest that required her to wear swimsuits.

“But I had to do this because I have something to say. I joined pageants because I want a bigger platform to spread the message of peace, among other advocacies,” the queen said.

After the beauty queen’s talk, the students rushed toward her and gave her a warm reception, hugging her tightly and asking for selfies.

The students also offered her a special presentation, singing “Thanks To You” and “I Can” — to which Akeel sang along.

The beauty queen also planted a kiat-kiat (Mandarin orange) seedling in the school’s garden, as part of the institution’s partnership with JCI Makati, JCI Silang Cattleya, and JCI Silang Pasimuno.

The Miss Asia Pacific International organization said Akeel is set to participate in more projects, one of which is a fun run for the various indigenous people (IP) communities in the country, which will take place later in summer. /atm