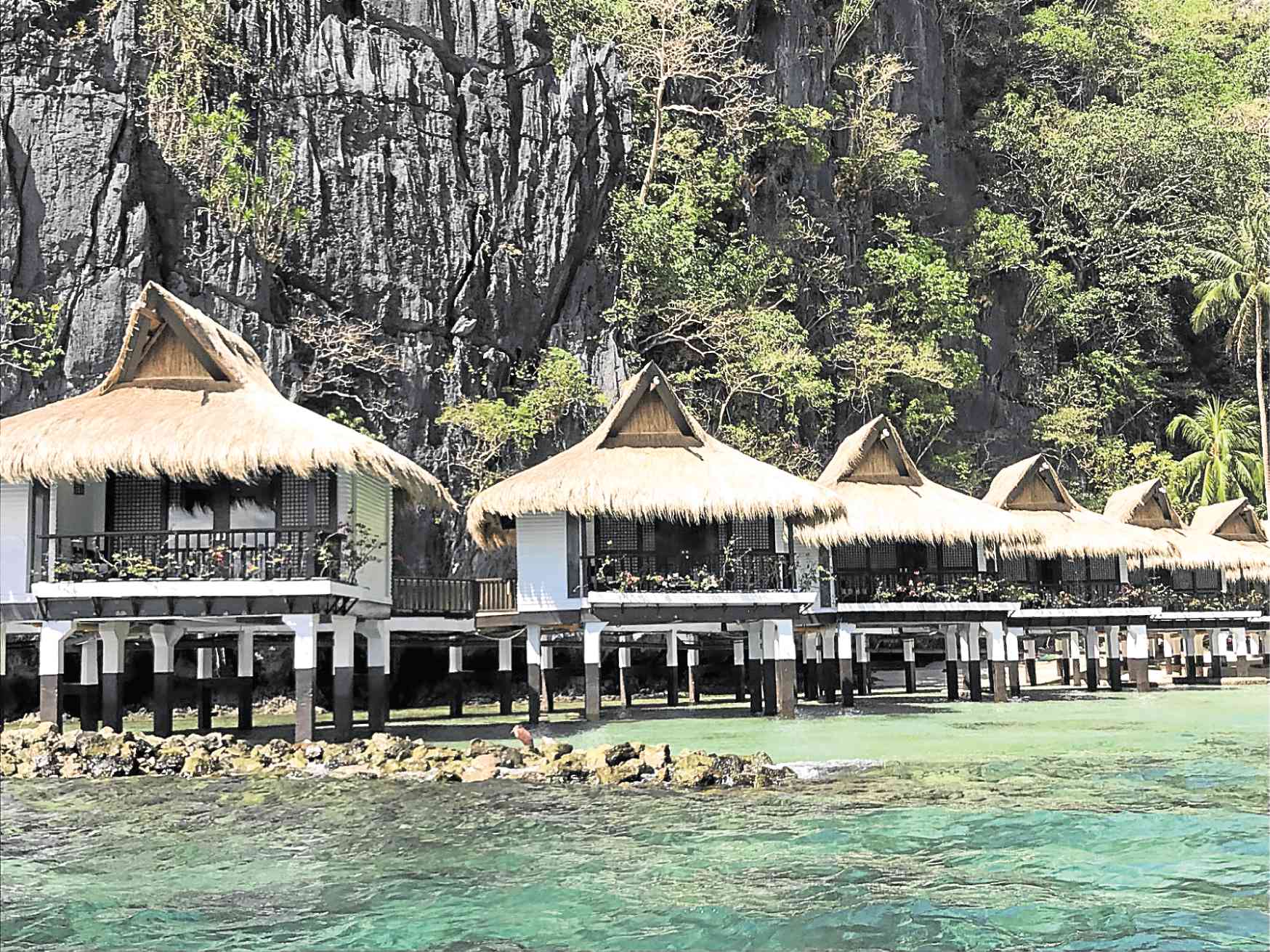 The experience was almost surreal. There we were, en route back to the resort, cruising offshore one moonless night when, right above us—incredibly bright and clear—was a canopy of stars. Removed far away from the pervasive city lights, we discovered that it was possible to view countless stars millions of light years away, stars so distant that in dark night skies they look like fuzzy blobs.

It was a well-spent weekend. We were accommodated at Miniloc Island Resort, El Nido Resorts’ first-ever paradise getaway happily cloistered somewhere in northern Palawan. The resort, now a little more than 40 years old, has been an ecotourism destination way before sustainable development became a buzzword.

A stroll along the shores of one of its islands will bring you face to face with the mighty water monitor lizards, some huge enough they’re estimated to be about 30 years old. El Nido Resorts has been minimizing its footprint on the environment by focusing on nature-based activities. Regular visitors to Miniloc Island Resort, for example, are the harmless long-tailed macaque, the only monkey species in the Philippines.

These are unlike sneaky city monkeys who steal your food the first chance they get. These are monkeys who reside on the island. The island is their home, and the locals respect them for that.

These animals in the wild are still around simply because in every El Nido Resort development, said Joey Bernardino, marketing director of Ten Knots Development Corp., owner of El Nido Resorts, a mere 5 percent of an island is devoted into the resort construction.

Miniloc has undergone several renovations through the years, but its first major renovation, with a budget of at least

$5 million, happened last year, when the resort had to be shut down from July to December 2018. The makeover gave the resort a cohesive look, Bernardino said, seamlessly blending modern and local aesthetics.

All 51 rooms now have eggshell-white walls, capiz panels, and tiled or walnut floors. A stunning infinity pool, quickly turning out to be one of the guests’ favorite spots on the island, now lies close to the shore where cabanas used to be.

The resort chose to keep its rustic charm with its signature cogon roofs, setting it apart from other El Nido Resorts development like Pangulasian, Lagen and Apulit.

Oscar-nominated actor Margot Robbie stayed at Miniloc in 2015 with her then fiancé (now husband) Tom Ackerley. Fans know how much Robbie loves the beach. “I would love to have your job!” she told the affable Miniloc Island Resort manager Mark “Big Mac” Guerrero.

The Hollywood star had such a wonderful time that she posted photos on social media, and even tagged El Nido Resorts on Instagram. That she had fun is not a surprise. Northern Palawan, where El Nido Resorts is located, is home to more than 900 fish species and a variety of marine invertebrates, mammals, and reptiles.

Go snorkeling into its waters, a mere stone’s throw from the resort, and you’ll encounter large jack fish plus schools of other fishes—thousands of them swimming in synchrony. It’s a breathtaking spectacle, all happening just an arm’s length away.

An island nearby, Shimizu Island, is famous for its glorious display of marine biodiversity. There are parrot fishes, so-called because of their parrot-like “beaks.” Parrot fish consume, by accident, dead corals while feeding on its staple algae so that its stool, composed of ground corals, makes up the white-sand beaches.

A trip to El Nido, however, is never complete without kayaking in the Big Lagoon and Small Lagoon, both minutes away from Miniloc Island Resort. Kayaking, in fact, is one of its major attractions. It can be daunting, especially for the uninitiated, but it is a most rewarding activity. You’ll kayak through narrow gaps among the island limestones and dodge limestone formations.

By the time you get that much-deserved break—you’ll have to kayak back to the sailboat anchored more than a kilometer away—you’ll be in the middle of absolutely still emerald waters, so clear you can see the corals and fishes below.

(Boats are not allowed to anchor near the shore to avoid damaging the corals. There are mooring buoys in specific areas.)

In the daytime, sail toward Entalula Island, about 30 minutes from Miniloc Island Resort. Bernardino proudly calls it the Boracay of El Nido for its powder-white sand beach. It was on this island where we saw a hefty water monitor lizard strolling by the beach. They are harmless, and would gladly get out of your way. Entalula Beach is a small spot on the island, equipped with its own bar and restaurant whose purchases you can charge to your room.

Food at Miniloc Island Resort is locally sourced. Greens are locally grown, and pork and chicken are locally raised. Seafood is sourced in Palawan. Close to 60 percent of all ingredients used in all four El Nido Resorts are sourced from locals.

Since 2006, lettuce, arugula, tomatoes, eggplants and other vegetables have been grown in El Nido’s own farm. The resorts generate 36,000 kg of biodegradable waste each month that are composted. This makes it possible to grow a variety of produce in the marginal soil of Palawan.