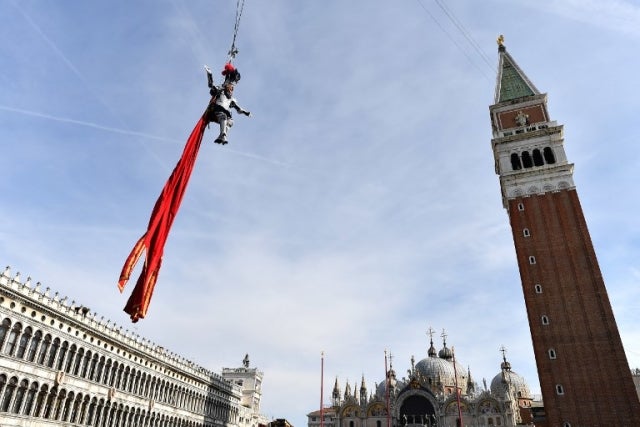 The "warrior angel" Micol Rossi performs as the Angel of the new Carnival on February 24, 2019 in Venice. - The "Flight of the Angel" is a traditional event that goes back to the Serenissima period where an unknown guest of Venice, flying along a rope from San Marco bell tower to the middle of the square. Image: AFP/Alberto Pizzoli

Venice Carnival kicked off on Sunday with not one but two traditional “flight of the angel” ceremonies, a highlight of the festival before thousands of onlookers in the Italian Renaissance city’s St Mark’s Square.

Each first Sunday of the carnival, a young woman chosen as “Marie” has the honor of performing the stunt, gliding through the air on a harness attached to a cable from the 99-meter (325-foot) bell-tower of the Basilica to a stage below.

As she soars overhead, the angel tosses confetti over onlookers below, many wearing costumes and disguised in masks.

Erika Chia, 20, descended to music from David Bowie’s “Space Oddity”. In an exception this year, she was preceded by “warrior angel” Micol Rossi, 27, who was chosen as a symbol of hope and tenacity for her battle with Crohn’s disease.

“It has been so emotional to see the whole city of Venice from above, it’s the most beautiful city in the world,” Rossi told AFPTV. “I did this for the many people who are suffering from an illness right now, and I have been thinking of them in their hospital rooms.”

The centuries-old Venice Carnival, rooted in Christian festivities ahead of the fasting period of Lent, attracts crowds of foreign and Italian tourists to its masked balls and theatrical performances.

The carnival, which lasts until March 5, was created in Venice in 1162, the day after a military victory. CC

Venice Carnival takes wing with ‘flight of the angel’

Venice ready to turn back tourists if too many come