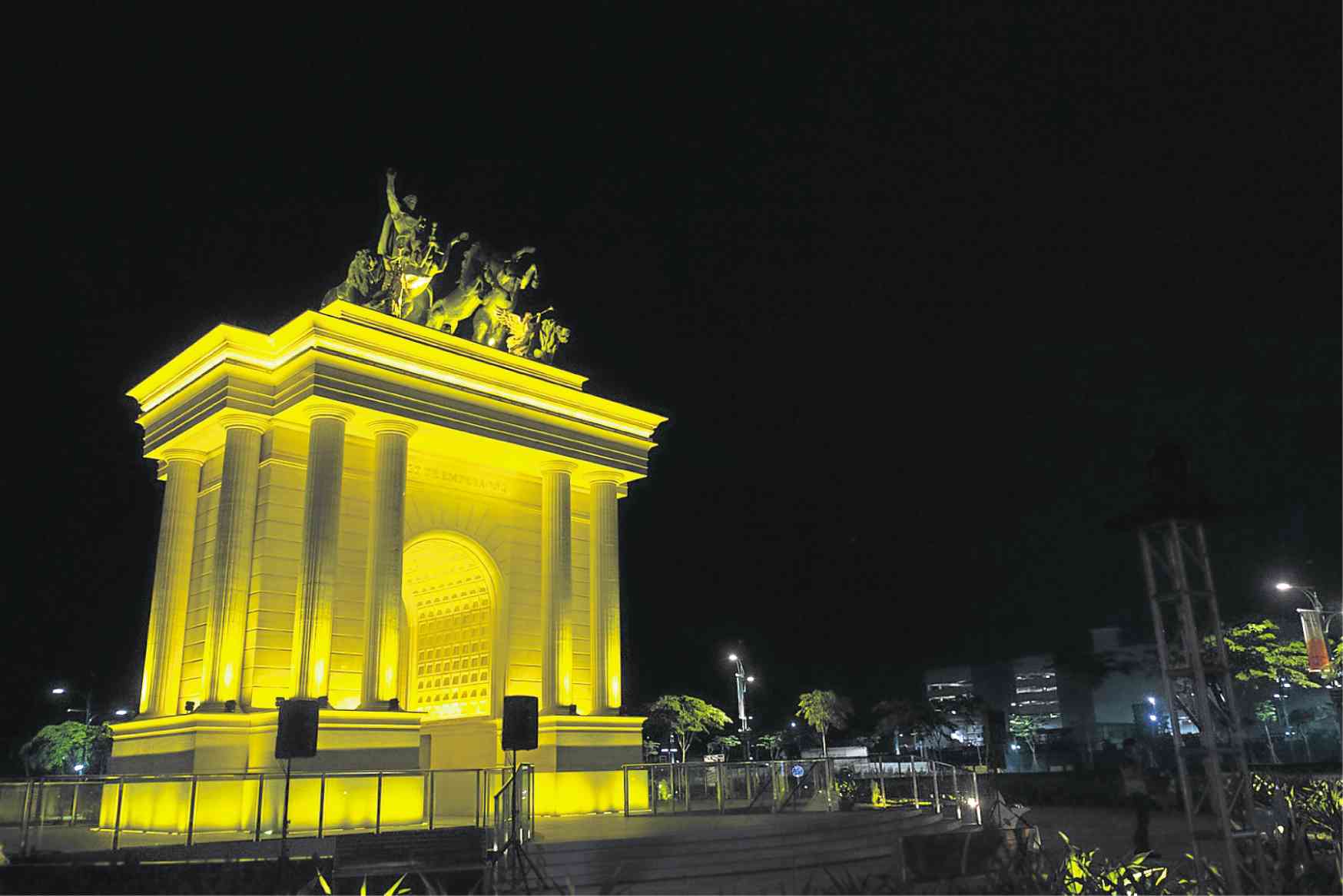 The Arco de Emperador will be the new landmark of Arcovia City, the 12.3-hectare township on C-5 Road, Pasig City. —PHOTOS BY ALEXIS CORPUZ

At 23 meters high, the Arco de Emperador is now the country’s tallest monument and arguably the first triumphal arch, inspired by historic landmarks in Europe.

Atop a neoclassical archway stands a bronze composition of a Filipino “emperor,” in Roman garb, raising one hand to give his blessings. He is perched on a chariot, surrounded by lions and gold-clad angels.

Designed as an attraction, it will welcome people to Megaworld’s new township, Arcovia City in C-5, Pasig City.

Spanish multimedia artist Gines Serran-Pagan was tapped by Dr. Andrew Tan, founder and chair of holding company Alliance Global Group Inc. (AGI), to create a landmark, the “Emperador.” More than just a reference to AGI’s namesake distillery, it is a Spanish word for emperor.

Tan’s vision was to build a triumphal arch unique to the Philippines. Serran-Pagan visited the Wellington Arch in London, Arc de Triomphe in Paris, Arco de la Victoria in Madrid, the Arch of Constantine in Rome, the Triumphal Arch of Moscow in St. Petersburg and the Brandenburg Gate in Berlin.

While the triumphal arches in Europe commemorated heroes and war victories, Tan’s concept was to depict the Emperador as the ordinary Filipino who overcame challenges in life through hard work and commitment. The original model of the Emperador took after the features of Trajan, the ruler who expanded the Roman Empire. However, Tan wanted the face to be relatable to Filipinos.

Hence, the Emperador’s face is a composite of features of Filipino heroes.

In an interview with Lifestyle, Serran-Pagan explains that another unique characteristic is that the Emperador stands on a chariot drawn by three horses. The classical quadriga, found in many arches, consists of a chariot drawn by four horses. However, four is considered a fatal number in the Chinese beliefs. Therefore, for a balanced composition, Serran-Pagan created two lions that protect the Emperador and two 24-karat gold angels blowing trumpets.

He adds that the angels also symbolize the spiritual nature of the Filipino.

He was also commissioned to create other landmarks for Megaworld’s new townships. The Mactan Newtown in Cebu will pay homage to Fernando Magellan as the explorer who circumnavigated the globe, and King Philip II whom the Philippines was named after. Unlike in other artistic renditions of Lapu-Lapu, the datu will not hold a weapon.

Gen. Maximino Hizon, who rebelled against the Spaniards, will be the centerpiece of Capital Town in San Fernando, Pampanga.

Serran-Pagan notes that none of his monuments will depict violence. “I want the monuments to build bridges,” he says. “Dr. Tan is bringing forgotten heroes to the fore so that the young generations will be proud.”

Serran-Pagan has traveled around the world to understand indigenous cultures.

“Anthropology taught me to make the world my house. Art is not a profession but a way of life. The people I lived with have an energy of spiritual strength and are strongly connected to nature,” he says. “I’m always looking deeper into the soul and the essence of art.”

He began with abstractions, developing his own language and shunning rules.

“Art originated in my belly. Only there can we create something timeless,” he says.

He then went into expressionism, conveying emotions through misshapen images and bold colors.

Serran-Pagan ventured into three-dimensional art when he studied ceramics in New York and Japan. He learned from Chinese bronzes, classical Renaissance sculptures and the veiled sculptural works of Rococo artists Antonio Corradini and Giuseppe Sanmartino.

Serran-Pagan says the angels at the Arco de Emperador were the only sculptures known today that followed the techniques of Rococo artists. The difference was that he cast them in bronze instead of the classic marble or ceramic.

“I create art that is beyond ornamentation. My bronze sculptures are not objects. They have life, which is going to last thousands of years. They bring a message to the world,” he says.

Serran-Pagan considers the Philippines his second home. He first came in 1993 upon the invitation of gallery owner Silvana Diaz. He has held several painting exhibits, experimenting with various media.

“I am probably the only foreign artist who has celebrated the Philippine Centennial with an exhibit in 1998 at Silvana Diaz’s Galeria Duemila. I have done the portraits of President Jose Laurel and José Rizal. I have created many of my artworks in Manila, Bohol, Palawan, Boracay and Iloilo,” he says.

He spent weekends painting the seas and sky in the vacation home of Silvana and Ramon Diaz in Calatagan, Batangas.

Like many visitors, he waxes enthusiastic about the country’s multicultural influences, the hospitality of the Filipino, and the country’s natural beauty.

“Not every country in Asia has such historical wealth. Any artist will feel inspired by such a mix of cultures and amazing light,” says Serran-Pagan. —CONTRIBUTED