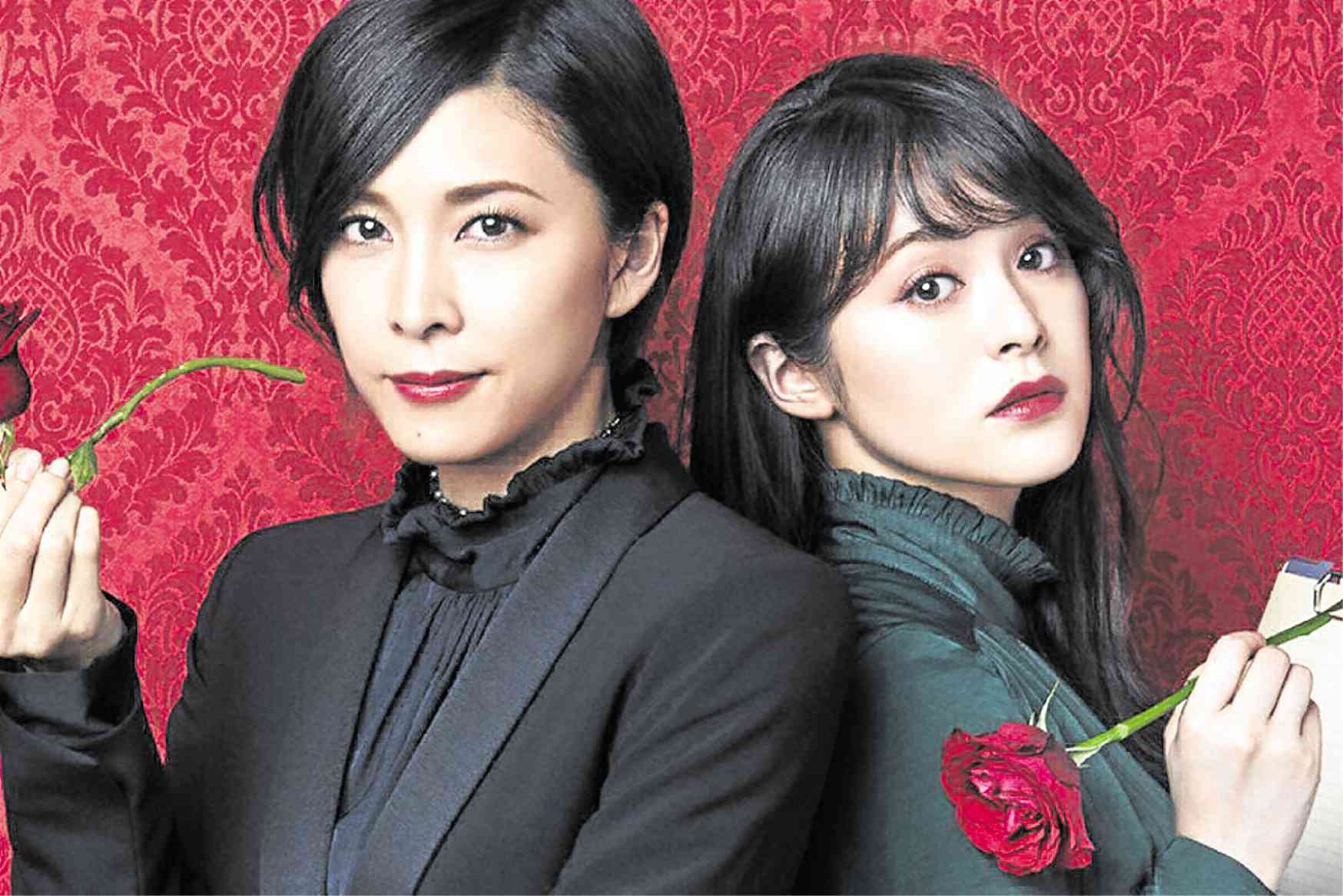 “MISS SHERLOCK” Yuko Takeuchi and Shihori Kanjiya in the refreshing Nippon adaptation of of a British detective classic —IMDB.COM

The crime/detective TV series began its resurgence about a decade ago when the BBC’s modern-day “Sherlock” enthralled viewers worldwide with an excellent display of British screenwriting, acting and sauciness, topped off with the tandem of Benedict Cumberbatch and Martin Freeman.

But the genre has been fueled not only by productions from the West. Japanese imagination has long run wild in adapting for the small screen tales of sleuths going after villains and crooks—enabled perhaps by that country’s low crime rate?

Some of the culprits can be so kawaii, they seem unlikely to hurt a fly. So the challenge for the J-drama agent is to out those who may be kind, polite and neighborly—common traits in Japanese society—but are absolutely guilty of literally sticking a knife in or throwing someone under the bus (or off a building, which, in the world of J-dramas, can be exercised creatively in more ways than one).

Super weighs in on two fairly recent detective series made in the Land of the Rising Sun.

“I can’t think when my aesthetic is disturbed,” said Sara Shelly Futaba—aka Sherlock—as she hastily threw an Hermes coat at would-be housemate Wato Tachibana, whose dowdy, baggy clothes were for her an eyesore.

That was a telling scene from episode 1 of “Miss Sherlock”—the only homage to Sir Arthur Conan Doyle’s detective classic to be set in Japan and with women in the helm as the Japanese counterparts for Holmes and Watson. Style spoke volumes in the series, like with the designer coat that Wato-san (as in the doctor, get it?) had to refuse because the lining had bloodstains from when its chic owner used it to cover a cadaver at a crime scene investigation.

The actress Yuko Takeuchi embodied the titular role in ways beyond just looking fab in conservative, tailored luxewear. (She wore plenty of black, textures and layers—truly symbolic of the character.)

Takeuchi had the famous detective’s ticks and mannerisms down pat, as well as the callousness, the social recoil, the mischievous delight over the strangest reasons. At times, though, she seemed to push too far, behaving playfully, or uncharacteristically illogical, for one who takes pride in preciseness and balance of mind. But Takeuchi isn’t the problem here—she’s actually a good fit.

Who isn’t? That would be Shihori Kanjiya as Wato-san, whose dark backstory and dense storyline deserved an actress with more nuance and skill. Her Wato could hardly take a jab at the stubborn, unyielding Sherlock, what more if they were to trade barbs?

Kanjiya could actually be a metaphor for the entire series: full of (production and fashion) flair—it’s an HBO project, after all—though slightly lacking in substance. Nothing that can’t be remedied in a second season, which has been strongly hinted at in the final episode’s cliffhanger of an ending.

It couldn’t possibly end there, and what a shame if it did, because “Miss Sherlock” is a refreshing Nippon adaptation for the Sherlockian’s viewing pleasure.

Where to stream: Viu app, www.viu.com

Why fill up the space with an enumeration of practically the entire cast and even some guest appearances?

That’s because “Keiji Yugami” (Detective Yugami) not only delivered a topnotch detective duo—the irreverent Yukimasa Yugami (Tadanobu Asano) and his earnest but ambitious younger work buddy Torao Hanyu (Ryunosuke Kamiki). The miniseries also nailed ensemble acting, so let’s give credit where credit is due. At the very least, start being familiar with the multisyllabic names of these Japanese actors who populate some of the best movies and/or programs from Asia.

For sure you’ve seen Asano and Kamiki before, both having starred in live-action movie adaptations of popular manga, animé and Japanese novels. Asano was the experimental parasite Gotou in the “Parasyte” movies and Ishi in “Kiki’s Delivery Service.”  Kamiki played the swift emotionless swordsman Seta Sojiro in the “Ruruoni Kenshin” big-screen adaptations and then turned just as villainous in the extremely violent 2014 horror-thriller “As the Gods Will.”

In “Yugami,” the two actors make a perfect foil for the other. They exchange caustic remarks, and mock, torment and provoke each other through hilarious means. It gets rather physical between these guys, but all in the name of good fun.

From the supporting cast, the lovely Izumi Inamori’s detective chief Rika Kanno was especially fun to watch. When this lady boss gets so frustrated with her lazy subordinate, Yugami, she’d give him a not-so-playful high-heeled kick in the bum—which to us signals the end of the testosterone-laden crime genre as we know it.